Maestro is a Gibson brand with roots dating back to the early 1960s. It earned its title as the ‘Founder of Effects’ for releasing the first commercially successful pedal of all time, among several other innovative effects. The Maestro Original Collection pulls on decades of rich history with five new pedals: Ranger Overdrive, Fuzz-Tone FZ-M, Invader Distortion, Comet Chorus, and Discoverer Delay. All five pedals on review today are brand new designs (not remakes of vintage units), and each pedal uniquely builds on the classic vibe we associate with vintage Maestro tones.

When Maestro released the Fuzz-Tone FZ-1 in 1962, the guitar pedal market was essentially non-existent. This odd fuzz box (originally intended to emulate the sound of brass instruments) failed to find its niche for a couple of years, that is until Keith Richards came along. Everything changed in 1965 when The Rolling Stones released ‘Satisfaction’. What was supposed to be a scratch guitar track (later replaced by a horn section) became an iconic riff that inspired guitarists everywhere to recreate his powerful tone. This led aspiring musicians straight to the Maestro FZ-1 Fuzz-Tone pedal.

Throughout the 60s and 70s, Maestro continued to innovate in an emerging guitar pedal market. Tom Oberheim, inspired by the sound of a Leslie rotary speaker, developed the instantly successful Maestro PS-1 Phase Shifter. Bob Moog took the reins starting in 1973, which led to innovations such as the Maestro Stage Phaser and MPF-1 Parametric Filter. By 1979 Maestro had ceased production. Today, many of the original Maestro pedals fetch astronomical prices.

The new next-gen Maestro pedals are all-analog designs with classic vibe and some modern features. Each model features rear-mounted jacks for a cleaner pedalboard run, true bypass, and simple three-knob / single-toggle controls. The retro aesthetic matches the sonics, and when the pedal is kicked in, an indicator LED pops on inside the classic Maestro bugle logo.

All pedals are mono-only, with 1/4” I/O and a standard 9V barrel connector. Each model retails for $149, except the Discoverer Delay, which retails for $159. 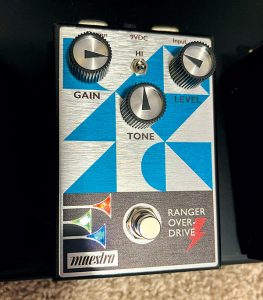 The Ranger Overdrive kicks things off with an expressive amp-like tone. Of the three drive pedals in the line, I found the Ranger to be the most utilitarian; with a low and high toggle switch, it can be dialed in from the edge of breakup to full-on amp-like overdrive.

The three knobs control gain, tone, and level. The tone range is quite far-reaching, yet both extremes produce usable results depending on the task. I kept it tilted around 1 o’clock for the most part (slightly bright), as it helped cut through the mix without being too bulky in the lower mids. Switching to the high gain side and rolling off the tone knob created a thicker tone with enough gain for heavy rhythm guitar or riff rock. I could see Ranger well served as a first-stage overdrive, using its ample output volume to drive amps and downstream pedals. 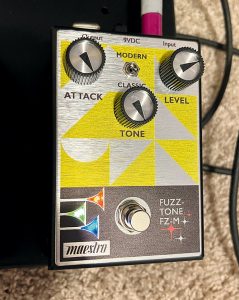 The Fuzz-Tone FZ-M dirties things up with a choice of switchable classic and modern voicings. The ‘Classic’ setting is inspired by the original Fuzz-Tone FZ-1, but with a brighter and more vintage-sounding character. ‘Modern’ produces a thicker tone that is also notably more mid-forward.

The three knobs control attack, tone, and level. I found the tone knob to be especially responsive, with a range that covers everything from dark and wooly to bright and fizzy. Most of the time I kept it rolled back; the brighter tonality (especially in classic mode) gets quite pronounced beyond 12 o’clock!

Classic mode captures the essence of the original FZ-1 beautifully. I also enjoyed how it stacked with the Ranger Overdrive. With the tone knob opened up a bit, the midrange and body filled out nicely while the fuzzed-out top-end could sear right through a brick wall. I could see using the modern setting as a vocal or drum processor in studio applications as well! [or put horns through it on your ‘Satisfaction’ cover…  -Copy Ed.] 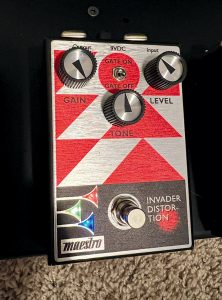 The Invader Distortion pedal has full-throttle aggression that begs for high-voltage rock ‘n’ roll. It’s rich in harmonics, provides sustain for days, and is easy to dial in. Breaking away from the Original Collection paradigm, Invader features a built-in switchable gate in place of an alternate mode.

The three control knobs are gain, tone, and level. Not that I’d describe anything about this pedal as subtle, but the tone range here is not nearly as far-reaching as its fuzzed-out sibling. I found both extremes very musical and usable. I generally switch between a few different amps when testing pedals (mostly leaning on my clean Fender GB Hot Rod Deluxe as a pedal platform), but the Invader inspired me to let my vintage Marshall JMP 2203 rip. The pairing certainly didn’t disappoint! The gate threshold felt a touch too high by default, but this can be set to taste on an internal trim pot. 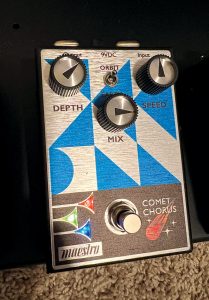 The three knobs on Comet control speed, depth and mix. I do wish there was an indicator LED for the speed control because if you wish to sync it to a specific tempo, it needs to be done entirely by ear. That being said, the tonality of Comet more than makes up for it, with a lush and fat sound. Plus, it plays the role of two pedals, as you could easily use orbit as a dedicated tremolo channel, while earth serves the chorusing needs. A stereo edition of this pedal would really shine in the studio… 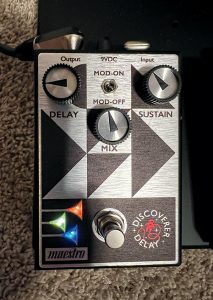 The Discoverer Delay is a bucket brigade delay pedal that delivers warm, tape-like echo. The switch toggles modulation on and off; the three knobs control delay time, sustain, and mix. Delay time ranges from 20ms to 600ms, so you can generate effects from slapback delays on up to near self-oscillating sustain.

The modulation adds a natural wow and flutter effect to the delays, with a worn and vintage-sounding character. Adjusting the internal trim pots unlocks two additional parameters for the modulation: rate and width. Increasing the modulation’s width (aka sweep range) creates a more noticeable pitch-shifted modulation. The Discoverer sounds almost like a modern take on a vintage Maestro Echoplex. And I’ll say it again—stereo edition please!

The Original Collection is a rock solid lineup of affordable pedals to kick things off again for Maestro. There’s great value and a lot to be excited about here; each model offers a true 70s vibe with an expressive analog tone. I hope the line expands, perhaps even to deliver faithful remakes of sought after classics. The pedal geek in me is very excited to see what Maestro and Gibson have in store for this line.