Studio-quality vocal clarity in the palm of your hand

DPA has a reputation for building some of the most accurate and musical-sounding microphones on the planet, and for good reason. Best known for its miniature microphone technology, DPA brings studio-quality sound to the stage in small, flexible packages that use practical mounts and clips for precise placement. The d:facto 4018VL (reviewed November 2013 as d:facto II) was the first DPA vocal microphone for live handheld performance, and it’s still popular for its natural frequency response, off-axis rejection, and wide dynamic range. The new DPA 2028 aims to put a friendlier price point on the same quality and sonic character as the flagship d:facto. With the 2028, legendary DPA sound is more accessible than ever.

The DPA 2028 is a high-quality condenser microphone designed for the stage. It comes in a sleek black finish and feels comfortable in the hands. Using an SM58 as a baseline, the 2028 is slightly larger and more substantial and feels equally as rugged. It comes in three varieties: the wired XLR model (on review here), the SL1 (built-in wireless adapter for selected Shure, Sony, and Lectrosonics transmitters), and the SL2 (built-in wireless adapter for selected Sennheiser transmitters). While the d:facto is modular and comes with interchangeable capsules, the 2028 comes with just one capsule, which serves to bring the price down.

The capsule in the 2028 is a new design by DPA. It combines cardioid and supercardioid directionality to minimize onstage feedback. Supercardioid microphones are great for live use but don’t offer as much rejection from the rear as cardioid microphones do, which can cause problems when using wedge monitors on stage. The hybrid design of the 2028 capsule achieves the rear rejection of a cardioid microphone along with supercardioid directionality. This means it has a slightly tighter sweet spot than a cardioid but features excellent rejection from the sides and rear. The polar pattern response chart depicts an evenly balanced response throughout the entire spectrum, slightly tightening up from 16kHz; this ensures that the timbre of the sound will not change when the source is slightly off-axis; it will sound somewhat lower in volume, but the sonic character will remain balanced.

In addition to the new capsule design, the 2028 also features new shock mount, pop filter, and mic clip designs. The shock mount aids in reducing handling noise and cannot be unmounted from the capsule. The pop filter features three-layer protection: the outer black metal grille, a foam windscreen, and then the inner metal pop filter. The included mic clip fits snugly and securely, but isn’t so tight that it’s a struggle to attach.

The 2028 capsule can withstand an impressive 160dB SPL before clipping, which I hope never to verify firsthand. It has plenty of headroom for any genre of live music performance. The frequency response is listed as 20Hz-20kHz, or 100Hz-16kHz +/- 2dB (measured at 4.7 inches). It has a permanent 3rd order low cut filter at 80Hz and a gentle boost from 8kHz-9kHz. The rest of the spectrum looks completely flat on the response chart.

The dynamic range of 117dB helps emphasize the quick transient response. The crisp and punchy sound of the 2028 helps with vocal clarity and speech intelligibility, as well as cutting through the mix.

The DPA 2028 sounds incredibly transparent. In the time I spent with it on both male and female vocals, the resulting tracks fell naturally into place with minimal effort. Where some microphones would need a bit of EQ to help with presence and intelligibility, I found the 2028 to have a very open and natural top end, with a sheen that helps it to speak in the mix. On most voices, the bump at around 8kHz lies just below the sibilance range, but I occasionally had to engage a gentle shelf or de-esser to tame particularly sibilant frequencies. The midrange is both smooth and polite, and I found myself adding a slight bump at around 1kHz-2kHz for rock applications to add some teeth when appropriate. The low midrange at around 250Hz to 500Hz, sounds very evenly balanced and true to the source. With many instruments competing for space in this range, it’s important to make sure that there aren’t any honks or frequencies building up; in my experience with the 2028, there was no problem. The response is clean and clear.
Sub-250Hz starts to gently roll off, with a more significant rolloff starting down around 80Hz to 100Hz. At times, I was hoping for a bit more low-end presence, especially on deeper male vocals. The 2028 does have a nice proximity effect that can be leveraged for more lows, but only at the cost of more plosives sneaking through. For most voices, the 2028 low end is just right and translates into the mix beautifully.

One of the most impressive aspects of the DPA 2028 is its off-axis rejection. Sources that are slightly off-axis stay truly balanced, making it far more forgiving when vocalists venture slightly off-mic. Sure, the volume attenuates a bit, but the overall shape of the sound remains true to the source. The rejection to the sides and rear is fantastic. I would bring this on a loud stage with the utmost confidence in its performance against feedback, and it seems to perform better than other handhelds I have tried in its class.

The three-stage pop filter performs very well. I had a few run-ins with plosives
sneaking through, but that could be chalked up to the placement and technique of the vocalist. Positioned 3-4″ from the singer (DPA recommends 4.7″), the plosives were minimal. 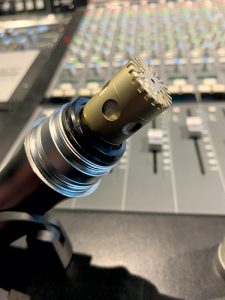 The 2028 is exactly what you would expect from a DPA microphone; transparent, uncolored, musical, and reliable. The vocalists I put it in front of were all ready to take it on the road with them! Male vocalists with deeper voices might desire slightly more low end response. Still, with the excellent proximity effect, off-axis performance, and realistic sound, the 2028 is a very well-rounded and road-ready vocal microphone. While it’s being advertised as a more budget-friendly version of the d:facto, I wouldn’t consider it a true ‘budget’ microphone. It’s an expensive microphone, but relatively more accessible than its modular sibling.