Does your guitarist want to play and sing at the same time? Don’t panic!

The vocalist who also plays acoustic guitar is found in many recording situations, everything from a singer-songwriter doing a quick demo to a heavily produced rock album with a lot of tracks, and in many of these cases it’s impossible to track the vocal and guitar separately.

For the time being we’re going to talk about a simple guitar and vocal setup with a singer-songwriter, just to demonstrate some of the possible techniques.

First, I want to say that it is more important to isolate the guitar track and keep the vocals clean than it is to isolate the vocal track and keep the guitar clean. If you have clean and accurate vocals, you can often get away with murder on the other tracks. The reason is that, even if a listener has spent decades carefully listening to guitar sounds, he or she has spent even longer listening to the human voice. The first thing we hear after birth is the human voice, and we grow up listening to it, and so we become much more sensitive to unnatural effects on the voice than on other sources.

Yes, it’s possible to get all kinds of deliberately unnatural effects on vocals, but this is done with the intention of making them sound different and obviously unnatural. And sometimes when you do this, keeping the vocals very clean before going into the effect is very important. For example, if the vocals are being deliberately distorted, even a small amount of leakage into the vocal mic can cause very odd effects on other instruments. 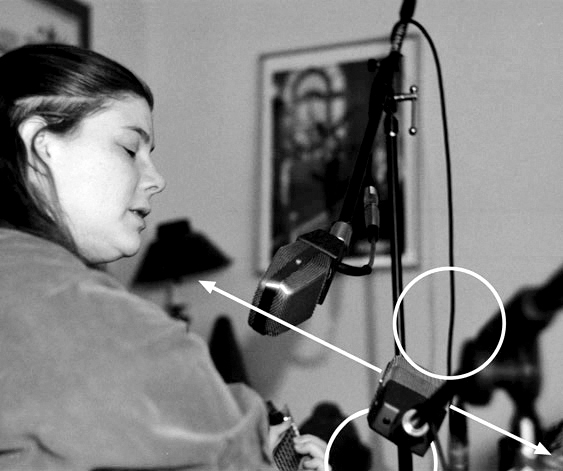 The first simple technique is just to use a single stereo pair on the vocals. Any standard stereo configuration, from ORTF to a Jecklin disc, can be used in this kind of situation—usually with the mic pair in fairly close and pointed mostly toward the performer’s mouth. Move the mics in closer for less room sound, farther out for more room sound, up for more vocal and down for more guitar. You’re using the room as the mixer. This will get you a phenomenally realistic sound, but it can have some problems.

First of all, you can have performers who have trouble staying in one place, and this results in vocals wandering back and forth across the stereo field. Secondly, you now have no ability to go back in and punch in and out to fix errors, so you are stuck either with doing it in one take, or recording multiple takes and patching them together.

A lot of the early Joan Baez recordings, for instance, were made with a single omnidirectional microphone positioned to get a good balance between guitar and vocal. If you don’t care about stereo, this is a great way to do it. 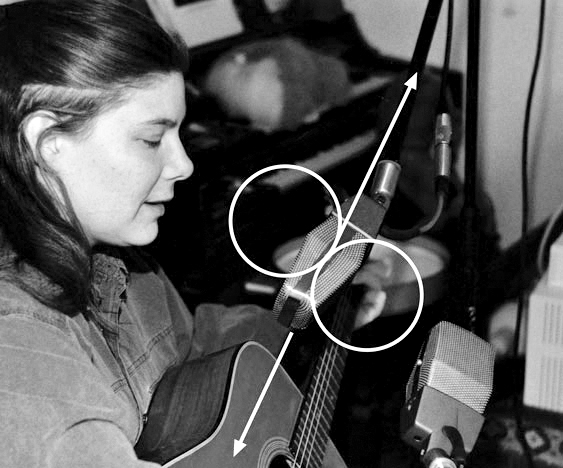 Figure-8 to the rescue

If you need to separate guitar and vocal feeds, the tool for the job is the figure-8 microphone. There are a lot of figure-8s out there, from ribbons like the RCA 77DX and the beyerdynamic M130 to condenser mics like the Neumann U 87 and the AKG 414 mics in figure-8 mode. The wonderful thing about a symmetric figure-8 is that it has an extremely tight null 90º off-axis where there is zero sensitivity, and the better the mic, the better the null.

This means that if you set up a figure-8 mic on the guitar with the null pointed toward the vocal, you can almost totally eliminate vocal leakage into the guitar mic. The only leakage you get is from room reverb, and in a dry room that can be very little. Likewise a figure-8 on the vocal with the null pointed toward the guitar will eliminate leakage of the voice into the guitar. Note that some ribbon mics are designed with offset ribbons that create a figure-8 polar pattern that delivers markedly different tone from the front vs. rear lobes; these are less suitable for this application because the nulls are less effective.

The next option is a hypercardioid, like the Neumann KMS 105 or the Electro-Voice N/D 468. The hypercardioid has much poorer nulling, but the null is at 120º off-axis instead of 90º off-axis, which can make it easier to position the mics. If you don’t have a figure-8 that sounds good for the particular singer or guitar, a hypercardioid mic can be a good second try.

With a KMS105 on vocals and an N/D 468 on guitar you can get pretty good separation. Not as good as with a pair of figure-8s, but quite respectable, and certainly enough that you don’t have serious phasing problems when mixing the two.

This is a fairly simple but effective technique, one that used to be very common but isn’t seen much any more, due to the lack of figure-8 microphones in most cabinets today. If anything else, this solution to the frequent vocalist/guitarist scenario is a great reason to add a figure-8 to your mic selection.