Is There A Shred Behind the Couch?

Home » Recording Resources » Recording Info » On Mics and Miking » Is There A Shred Behind the Couch?

Turn your home furnishings, and even your guitar case, into acoustic treatments for guitar amp recording!

Recording a great electric guitar tends to be a lot of fun. Drums can be tedious, bass can be ho-hum, but guitar—lots of fun, even under less than favorable circumstances, like in my apartment…

Good shred against all odds: when? And how loud?

My home is my castle—not! I can’t avoid a certain amount of sound leaking out into the world at times, so I have to carefully choose the hours when I can get away with it. Find out what the rules are where you live, to avoid any unpleasant encounters with irate neighbors or—worse—with the authorities.

Tube amps sound best when cranked to 11, and to get good feedback you must be in the “line of fire”—in front of the amp’s expulsion of sound. Fortunately, it is possible to push the tubes to their limits to ‘squeeze the tone out of your amp’ while remaining at acceptable volume levels. There are a variety of load devices that do just that. You could also use an amp software or hardware simulator to avoid waking up the neighbors, but that’s not Rock & Roll, now, is it? 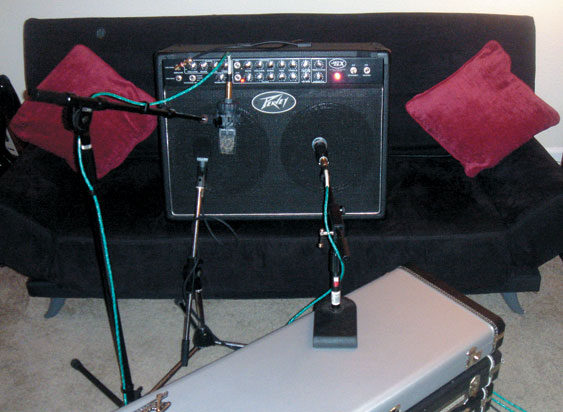 An amp on a couch…

Tone: hearing it, tweaking it

With amp, DAW, monitors, and me—performer/engineer—all in one room, I have a hard time telling what tone the mics catch while the amp is going. So I mute the studio monitors and use tight headphones with good isolation while soloing each individual mic in my DAW to hear how it reacts to its current placement. Use mic placement rather than EQ! Walter Sear of Sear Sound Studios (NY) once told me how the old Neve console manuals used to refer to equalizers as (something like) “correctional devices”—engineers used to see them as a way to fix a wrong. Should we re-evaluate our current practice that involves EQ before we’re even done with tracking?

Finding the right tone is as much personal preference and hence an art form as it is a practical skill. In general, placing the mic at the center of the speaker produces an edgy tone with more high frequencies than other locations. Pointing it towards the edge of the cone provides a smoother, warmer tone with less aggressive high-frequency content than other locations. Facing the mic away from the cone will accentuate the bass frequencies. 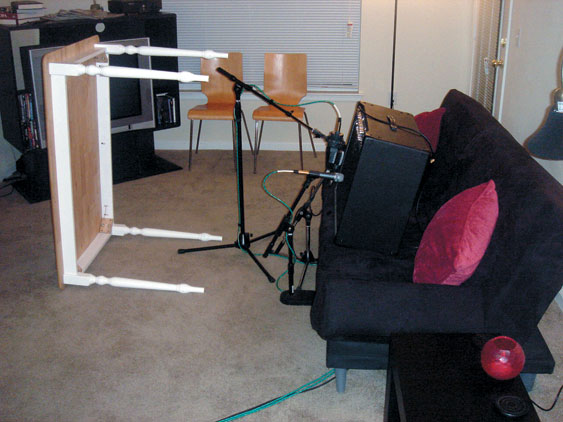 The table set up…

Various options can be just as effective in the home studio as in a professional setting.

• Placing a microphone in front of the amp’s speaker;

• a direct box (DI, preferably one that balances the signal) into a DAW or mixer;

• a DI to split the signal and send it to a mixer (or DAW) and to a miked amp;

Use what works, persist, listen carefully, and you will find your tone, maybe on your couch or in your bathroom…. 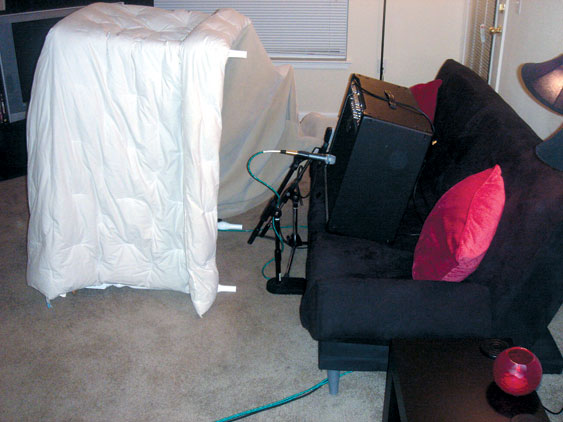 The table with the blanket draped over…

The living room couch to the rescue

See if this sounds familiar: My living room shares space with the kitchen and suffers from the sounds of the fridge, the gas fireplace (the pilot is always on and makes a very soft sound), A/C, computer fan, TV (make sure it’s off; even when muted, the transformer causes the guitar to hum), and any outside noises such as cars, children, etc. (even with the windows and doors closed).

You can buy isolators such as the Auralex GRAMMA and specially designed booths, but often the investment in a decent guitar rig and DAW is about all one can afford. Instead you can use your couch to float your amp or speaker cabinet to help reduce the noises transmitted through the floor (see the first photo).

Once the amp or loudspeaker is comfortably resting on your couch, you might want to isolate it further to record an even cleaner sound. Iso booths are expensive; make your own—turn your dining room table on its side and drape comforters and blankets over the front and around the amp, as shown in the second and third photos. It should vastly improve your noise insulation, and also makes for a fun tent!

(Word to the wise: if you’re recording near the fridge, turn off the ice maker and raise the thermostat so that the fridge kicks in less often.) 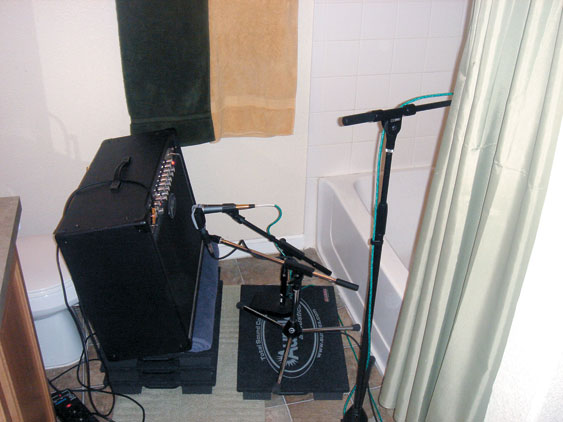 An amp in the bathroom…

Multitask the bathroom—it might be a decent live room (we sing in the shower because it sounds good). A great many recordings have benefited from temporarily reassigning the lavatories from their designated purpose for recording, even in world-class recording studios. All you’ll need is a door sign that reads: “In Session, Do Not Disturb”—which will be good for a grin at your next party, too.

As shown in the photo at right, I placed my amplifier facing towards the shower, rigging it with two close mics (Shure Beta 57A and a Sennheiser e609 Silver) and an AKG C 414 B-XLS as an ambience mic inside the shower (the multiple polar pattern option allows for many variations to capture the reverb). From the outside, the tub’s walls act like a barrier, so I placed my amp on three Auralex GRAMMAs for height and then added a folded towel at the front to angle the speaker upwards and allow the sound to dissipate more evenly throughout. Note that the size, shape and material (ceramic tiles, acrylic, etc.) will greatly influence the acoustic response of the sound bouncing around in the space.

I prefer to be consistent with the combination of the two close mics to ensure a present sound that I like. I have a lot of fun with the C 414 using a figure-8 (bidirectional) setting to capture the two walls perpendicular to the projection of the amp. Also, by facing the distant mic (cardioid or hypercardioid settings recommended) towards the opposing wall, you can capture the signal bouncing off the ceramic tiles or glass door. By half-closing the shower curtains or doors you can capture a trapped reverberating sound inside the shower; try the mic in omni mode. You can also achieve a really good reverb track with the ambience mic outside the shower, facing inward, with the shower curtain or door left all the way open or partly closed depending on what sounds best for the track, as in the photo below. (Tip: for increased reverb, face the amp away from the shower entirely.) 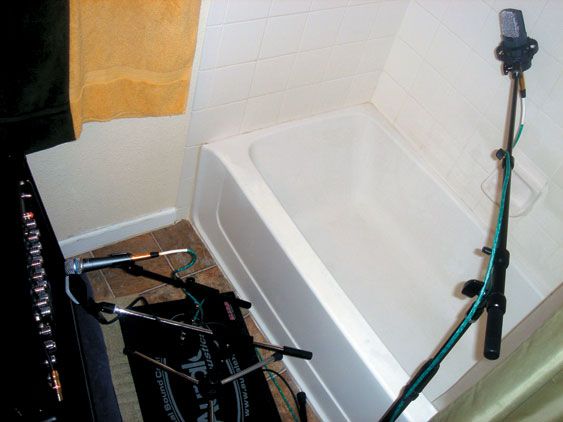 The 2nd mic in the bathroom…

In the spirit of experimentation, look for interesting settings at home and think of how they might affect the sound source. Put to good use what you already have, and be creative; find out what you don’t already know.

Geoff Emerick, not only known for engineering some of the Beatles’ finest works but also for putting his youthful playfulness to the test, was the first (according to him) to apply close-miking techniques on drums, damping the kick by stuffing it with a sweatshirt, innovating with tape loops, using distorted vocals in a song, and even using guitar feedback (a happy accident) in a song.

What’s next? What’s left? Maybe not miracle-level innovations, but how about good use of your resources for the best possible guitar tracks? Sounds good to me, and hopefully the results will sound good to you.