The term “backing vocal” describes a large array of possible vocal configurations. It could mean one singer harmonizing with a lead vocal, or more than 100 singers in a large chorus, or anything in between. All of the techniques used to mix a lead vocal track can be applied to backing vocal tracks, and then some….

When I’m mixing a track that includes backing vocals I find myself approaching all aspects of their mix somewhat differently than I do a lead vocal. While I look at the lead vocal as being the most important single element in a pop music mix and therefore do everything I can to make it as clean and robust as possible, I have different concerns with backing vocals.

Whereas I don’t much care for the sound of Auto-Tune on a lead vocal, it’s almost automatic for me to throw one on every backing vocal track. I view backing vocals as existent in a netherworld that is half vocal, half instrumental. Generally backing vocals must sync well with the rhythm of the lead vocal but must share more of the tuning attributes of the instrumental track.

Line ‘em up and air ‘em out

First I closely scrutinize their synchronicity with the lead vocal. If the ambition of the backing vocalist and producer was obviously to try to match the phrasing of the lead vocalist, it will be evident upon listening. If I feel I can improve this synchronicity by slicing and dicing, I will. I often cut backing vocals into syllables, sliding these syllables around in time until they match the lead vocal. If this leaves me with segments that are either too long or too short to match the lead vocal, I use Serato Pitch ‘n Time as my default time compression/time expansion tool. I’ll do what I need to do to make the vocals fit, as tight or loose as the musical style and taste of the artist and producer dictate. 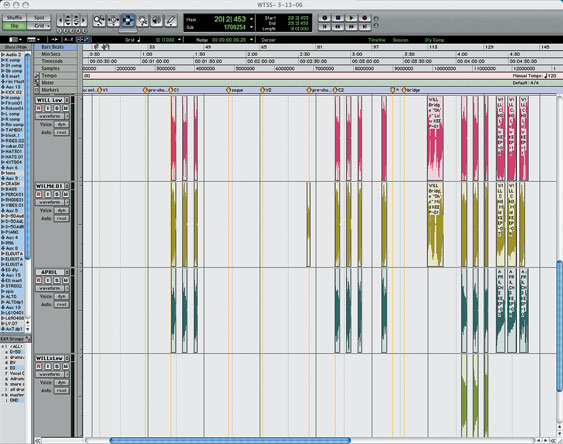 An example of backing vocal track editing. Note that the pauses between phrases have been tightly edited out of all these tracks, to remove distracting ambience.

Once this level of editing is complete, I deal with air and breathing between notes and phrases. I go through the backing vocals with a fine-tooth comb, crossfading my editing and making sure that all breathing is succinctly faded into and out of, or eliminated altogether, whichever suits my art-side instincts. Whereas with a lead vocal I consider whether or not to keep the “air” between vocal sections, with backing vocals I almost always edit the air out, and quite tightly. Why?

Since the lead vocal is the star of the show, even its air has the potential to be of interest. Subtle sounds from the backing vocalists’ track—the air, breathing, etc.—should never interfere with the sound of the lead vocalist’s track. This is not to say that I always edit out a backing vocalist’s breathing, but I tend to do this if I have any doubt that it will interfere with the focus on the lead vocal. If there are numerous backing vocals, the potential for distraction increases if each track’s noise floor randomly appears and disappears at the point at which it was punched in or out. Again, I usually just automatically tightly edit out the noise floor; I have no use for it.

Panning is the one thing that can be totally different for the backing vocals than for the lead. Depending on the number of backing vocal parts, all sorts of interesting panning schemes abound. A lead vocal—the dominant element in the mix—is almost always panned center, so I rarely if ever pan a backing vocal center. Think of it as a stage—few lead singers would like their backing vocalists to breathe down their necks.

And in fact, both in terms of sonic intelligibility and interest, it makes sense to give each its own unique space. So, keeping in mind the rest of the sounds in the mix, I try to find a unique pan position for the backing vocal, one that isn’t distracting if the part shouldn’t call attention to itself, and that stands out if the part should call attention to itself.

We can’t cover every possible situation; for now, let’s go with a lead vocal, one backing vocal that harmonizes the lead vocal, and two different two-part sections, each of which harmonizes a unique contrapuntal part. First, I would almost certainly place the lead vocal dead-center. I’d find a unique, non-center pan for the harmony vocal, then I’d experiment with how it sounds to group each of the two-part counterpoints where the “A” part is mostly to one side and the “B” part is mostly to the other. Then, I’d try to put one “A” part on each side, and one ”B” part on each side.

In either of these two cases, I would always give each backing vocal track its own unique pan position. For instance, in the case where the two “A” parts are on the same side, I might begin with one of the two at 60% left and the other at 35% left. Conversely, I’d place the two “B” parts on the right, mirroring these settings—one at 35% right, the other at 60% right. Based on the sound of these possible configurations, I would then decide how to proceed. The exact pan of each of these parts would be subject to the taste of the mixer, producer and artist. I may set the backing vocals one way, live with it while working on other things, and change it up later.

Just as it is with regard to a lead vocal or any other track for that matter, so it is with backing vocals. The order in which processors are chained can have a profound effect on the sound of the track. We’ll start with a look at dynamics processing.

I’m almost always in a hurry when I mix. This is just a fact of life when working for the self-releasing artists who comprise most of my client list. In this context, I can’t go into as much detail with the backgrounds as I do with the lead. Unless I absolutely have to hand-level backing vocal tracks, I’d rather just compress and/or limit them harder to keep them at a reasonable level in the track. Of course I always expect to have to adjust backing vocal levels regionally—I just try not to have to adjust syllable by syllable as I might with a lead vocal. On a per-track basis, limiting for wildly inconsistent peaks is still viable, as is the occasional de-esser and even sometimes multiband compressor.

Where I go from there depends entirely on the nature of the parts that were sung, how they were recorded and how they fit into the rest of the track. I strive to give each part as much unique identity as possible, while at the same time respecting the identity of all other parts. In other words, I try not to allow any two sounds to be too similar—it’s my feeling that this invites congestion and lack of intelligibility in the mix. That’s why I try to use a different mic for each part when tracking vocals.

Although I’m much more likely to use an exciter on backing vocals than I am on lead vocals, I still don’t use one very often at all. Even on a backing part, I still find their sound to be somewhat harsh for my taste. Especially for ooohs and aaahhhs, an exciter can help give a backing vocal increased intelligibility.

Backing vocals are among the best contenders for heavier use of time-domain processing (delays, reverbs, etc.). If I’ve already set up time-domain processing for the lead vocal, I’ll usually check out how the backing vocal sounds through it. I’d say this approach works about half the time, with the caveat that additional amounts or different additional processing may also be in order. Of course there is no one-size-fits-all treatment of backing vocals, so get to know the gear or plug-ins you have and try different things out until something feels right, then move on.

Pitch processing, distortion, and “the rules”

Using a harmonizer to thicken backing vocals is a common technique. Using a send from the backing vocal master fader, set up a stereo auxiliary return with a pitch processor on an insert. Set one side for –9 cents and the other for +9 cents. Adjust the volume to taste. It’s not a sound that everyone loves, but in small doses it can be quite effective at thickening and spreading the backing vocal sound.

I can’t think of too many (any?) examples where I’ve used distortion on backing vocals. Use of distortion generally brings more attention to the track upon which it is applied. Generally, that isn’t the function of a backing vocal track. However, if there was ever a field in which rules were meant to be broken, it’s music production, so have at it!

And that’s a good rule (non-rule?) to close with. As I’ve said before: each of us can always learn more and be more creative than we were yesterday. Let these guidelines be the starting point for your own adventures in backing vocals.