In 2012 Universal Audio launched the Apollo series of recording interfaces. The Apollos merged the company’s long-standing history of microphone preamps, digital converter design, and their DSP-based UAD-2 plug-in technology into one box. Reviewer Darwin Grosse looked at the original Apollo in our January 2013 issue; next came the Apollo 16 later in 2013, followed by the desktop Apollo Twin, which I reviewed in August 2014.

As a part of the Apollo Twin release, UA unveiled the Unison preamps. This cutting edge modeling technology combines UA’s detailed circuit modeling with a microphone preamp with a variable gain stage and impedance matching. This greatly improves the realism of the models, by mimicking critical input circuit properties in actual hardware.

Current Unison mic preamp emulations available for the Apollo include UA’s own vintage 610-A, the modern 610-B (both reviewed in August 2014), API’s Vision Channel Strip (reviewed July 2015), the Neve 88RS Channel Strip, and the Neve 1073 Preamp and EQ Collection (reviewed in April 2015). Unison technology also works with Apollo’s Hi-Z inputs. UA has a steadily growing collection of guitar amp and pedal models; you can check out our July 2015 issue for more details, and in a future issue we’re looking forward to bringing you an in-depth article on the subject: guitarist Alex Hawley’s take on playing guitar and doing fully amp-free production through Unison.

The new breed of Apollo

The next generation of Apollo consists of three new/updated units. The original Apollo is now the Apollo 8, there is an updated Apollo 16, and a third new unit joins the line—the Apollo 8p. Each one comes in a matte black finish vs. the original silver, and while they are similar to the originals, there are some notable changes and additions.

Thanks to a new protocol called Apollo Expanded, all Thunderbolt-equipped Apollo units (new and old) can work together as part of a larger stacked input system. With Apollo Expanded you can connect any four Thunderbolt Apollo interfaces as well as up to six Thunderbolt UAD-2 Satellite devices together. The new updated mixer software scales itself appropriately and offers control and configuration of all connected units seamlessly. Also, when using an Apollo Twin along with its larger rack-mount brethren, it can act as a master desktop level controller!

Apollo 8p: back to front

We were sent the new Apollo 8p, which is visually and functionally similar to the new Apollo 8. The Apollo 8 is an 18 x 24 interface with 8 analog inputs (4 mic/ instrument preamps with Unison plus 4 line inputs) and 14 analog outputs plus 8-channel optical ADAT and stereo coaxial S/PDIF. The 8p is a 16 x 20 interface with two fewer analog outs and no coaxial I/O, but has 8 rather than 4 Unison-equipped microphone preamps, hence the “p” in the name. The Apollo 8p is only sold in a QUAD configuration with four DSP chips on board; the Apollo 8 is available in DUO or QUAD configurations.

On the back of the unit are 8 Neutrik XLR–1/4″ Combo inputs, 8 balanced 1/4″ TRS outputs, BNC word clock I/O, and 4 ADAT/SMUX ports (also used for S/PDIF). There are also 2 parallel Thunderbolt 2 ports and a 4-pin XLR style power socket for connection to the large external power supply.

The front panel offers a pair of 1/4″ self-switching instrument inputs that, unlike those on the original silver Apollos, also make use of the Unison impedance matching. There is a large pushbutton rotary encoder which selects and sets levels for inputs 1–8, along with function buttons for input, phantom power, pad, phase reverse, highpass filter, and stereo channel linking. In the center of the unit is an LED display showing channel levels, clock source, sample rate, and output metering.

On the right of the display are a trio of new function buttons not found on the older models. The top selects input and output metering, and the second button (marked Alt) chooses between alternate speaker outputs on analog outs 3/4 or 5/6. The last button, marked FCN (Function), can be set to Dim, Mono, or an additional Alt output. These controls turn the Apollo 8p (and the Apollo 8) into a full-fledged monitor controller/speaker switcher. This is followed by a second pushbutton rotary encoder for output level and mute functions, and a pair of 1/4″ headphone outputs, each with its own volume knob (and individual Console mix bus). There is also a front-panel master power switch. 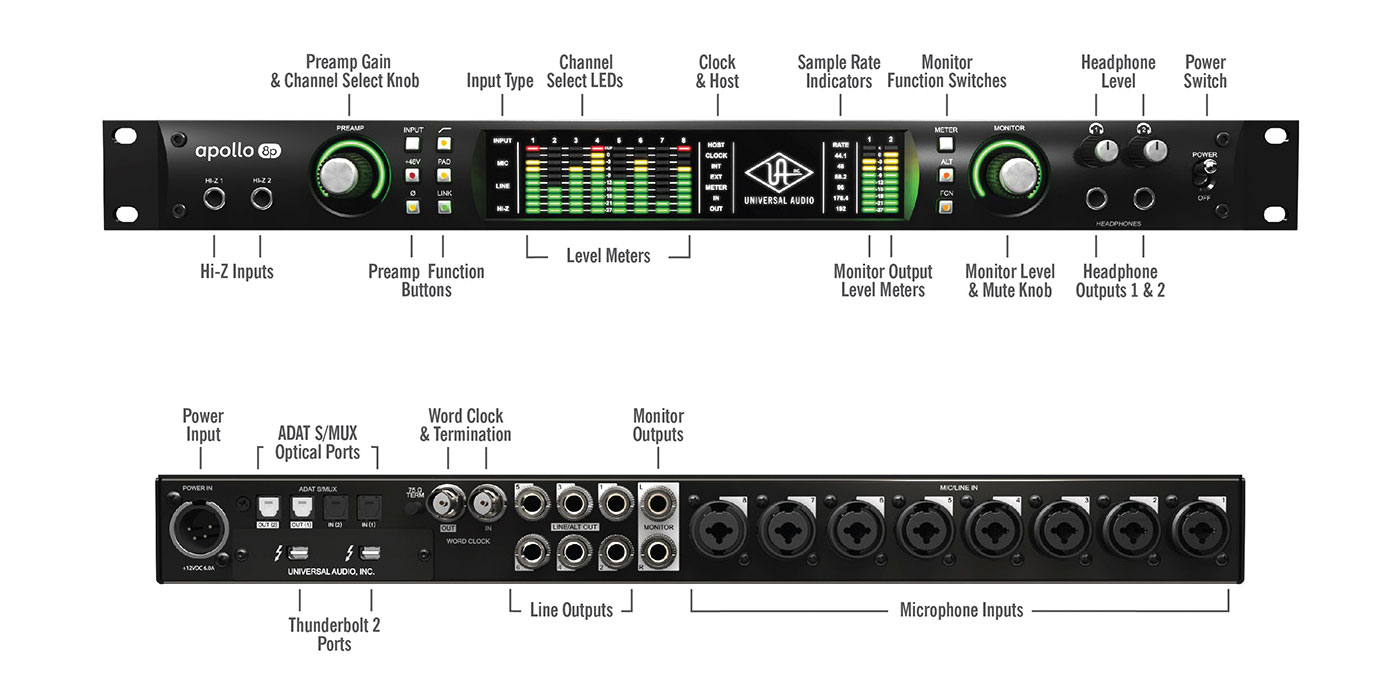 I use an Apollo Twin as my main audio interface in my office/edit suite for tracking song demos, voiceovers, and 2-channel remote tracking. As a result, I am very familiar with the Apollo interface and the Unison preamps and mic preamp models. Integrating the Apollo 8p into my rig was as quick and seamless as plugging in power and a second Thunderbolt cable. Even with a fresh install, UA’s setup, registration, and installation is a fast and seamlessly automated process.

The software mixer is one of the most logical software/DSP mixers I have used on an audio interface. It looks, feels and drives like a normal mixer with no tricky matrix routing, funky modern graphics, or layers of pages. It acts like a DAW mixer with easy to use sends and returns. All UAD plug-ins drop right into place for both low latency monitoring and/or printing while tracking.

I use Unison preamps often and I love that you can run 8 fully loaded simultaneous input channels on the QUAD-equipped Apollo 8p, including the beefy Neve 1073 plug-in on each input. The downside is some preamps, like the Neve, will use up most of your DSP engine if run on all eight channels, so you may be limited as to additional effects when tracking (unless you have additional UAD-2 engines on another interface or a Satellite).

Even more cool is that every analog mic/line preamp can be completely bypassed, making the Apollo 8p a straight A/D converter. This works on a channel-by-channel basis and lets you use your own outboard preamps for tracking and processors for mixdown, without the preamp circuitry getting in the way. You would be surprised by how many pro level audio interfaces do not offer bypassable preamp circuits; it’s very common for a “line input” to just be a padded-down mic input with all of the preamp circuitry still in the audio path.

This flexibility also extends to the outputs. Variable monitor level controls can be bypassed, so you get a straight fixed-level converter output signal that you can route to a monitor controller of your own, if you already have one installed in your rig.

While it’s easy to debate subjective issues like the sound of one converter/interface over another, the new Apollo 8p holds its own with anything else in its class. Its added features, attention to detail, and of course UAD-2 DSP technology make it a hard package to beat!