B&K to DPA: 30+ years of sonic precision, in a line of versatile pencil condensers

DPA is widely regarded for having some of the most transparent and accurate microphones in the world. Their pristine sound can be found across studios, stages, and film sets.

DPA has a rich heritage that dates back to the 1950s, with predecessor Brüel & Kjær (B&K), a company that specializes in audio measurement. In 1982, B&K designed the 4006 measurement microphone, an omnidirectional pressure gradient mic intended to transduce the full frequency spectrum with a wide dynamic range. The diaphragm remains unchanged from the original design. It’s made of two-micron thick nickel foil, with an ultra-thin anti-corrosive polymer layer. This was followed by the B&K 4011 in 1988, which was intended for studio use. Much like the 4006, the 4011 has an extremely linear response, but with a cardioid polar pattern. It won a TEC award in 1989 following its release.

In 1992, DPA Microphones was formed to handle the servicing, development, and distribution of B&K 4000 series studio mics. Led by former B&K employees Ole Brøsted Sørensen and Morten Støve, DPA turned those measurement microphones into the long-revered and sought-after studio mics we know today.

In 2005, DPA launched the 4006-TL reference standard microphone. The TL edition replaced the output transformer with electronically balanced output circuitry (‘TL’ stands for transformerless). It’s voiced nearly identically to its predecessor, with an extended low end response and increased sensitivity. The 4011 also received a TL model, though it was mostly for consistency, as the 4011 has always been transformerless by design.

The third generation was released in 2011 (notated by the ‘A’ revision), which brought modularity to the entire 4000 series lineup. This update enables any capsule or preamp body in the 4000 Series pencil mic family to be easily mixed and matched, providing more flexibility for different uses or sonic desires. It also came with minor spec improvements, including an improved dynamic range, and lower self noise.

The modular DPA 4006A and 4011A come prepackaged with the MMP-A Microphone Preamp. The MMP-A features transformerless circuitry with an active driver for impedance balancing. Other compatible preamps in the line include the MMP-C, MMP-ER, and MMP-ES. The MMP-C is a compact microphone preamp that yields a “slightly softer character,” according to DPA. The MMP-ER and MMP-ES cater to even slimmer setups, featuring a rear or side cable entry, respectively. There is also the MMP-GR/GS for use with a DPA Modular Active MicroDot cable.

DPA offers a variety of replacement ‘grids’ for the 4006A, which alter the frequency response when placed onto the end of the capsule. It comes with a Close Miking Grid (DD0254), Free Field Grid (DD0251), and Diffuse Field Grid (DD0297), while the Nose Cone (UA0777) and add-on Acoustic Pressure Equalizer Balls (APEs) can be purchased separately. This gives you a total of seven different frequency response curves on the same microphone.

The Free Field Grid is designed for close miking and produces the flattest possible response. It shows a flat line through 10 kHz, and a roughly 1dB lift from 10 kHz through 22 kHz. The Diffuse Field Grid is intended for distance miking, with a 6dB boost from 10 kHz to 20 kHz. The Close Miking Grid is similarly voiced as the Free Field Grid, with a slightly softer high frequency rolloff. The Nose Cone is designed to counteract the mic’s natural tendency to attenuate high frequency off-axis sounds due to the microphone’s size. It results in a more even tonal response arriving from all angles. The APEs are passive add-on devices that affect how sound diffracts around the capsule, ultimately resulting in a midrange and high frequency boost for on-axis sources. 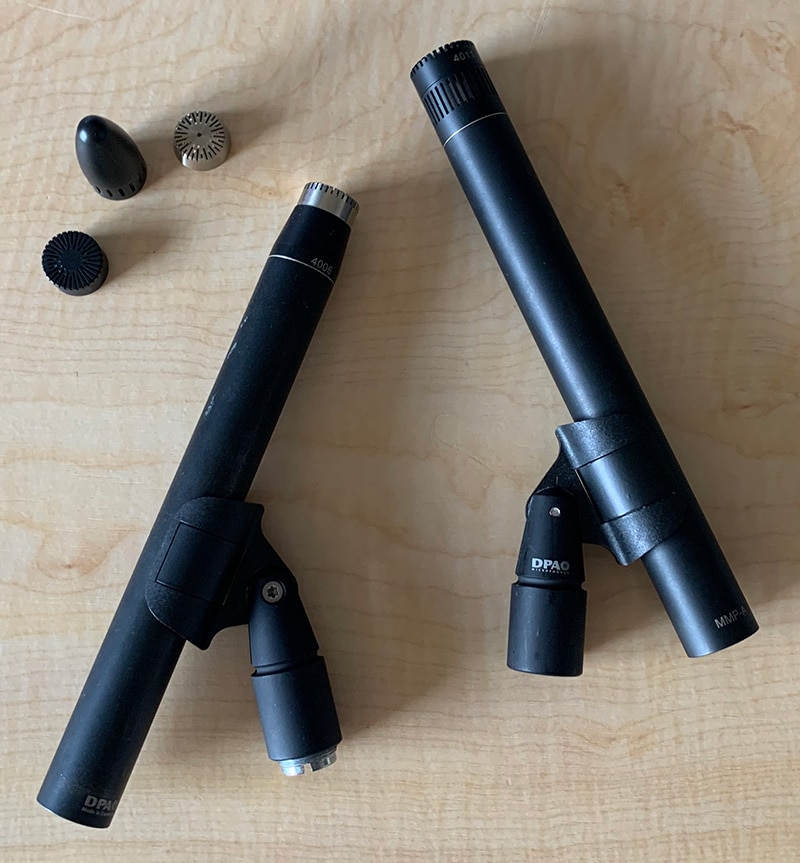 The 4011A and 4006A give a new meaning to the phrase true to the source. While both mics have unique characteristics that lend themselves to different uses, the common thread between them is accuracy, precision, and realism.

I started with the Free Field Grid on the 4006A, close miking a variety of sources.
Its omnidirectional polarity provides a natural and smooth response from both on-axis and off-axis sources, and reaches noticeably further down than its cardioid sibling. It captures stringed instruments beautifully, with a level of realism and depth that is difficult to achieve with
directional microphones. Its high sensitivity and low self noise make it ideal for recording quiet instruments, such as nylon string guitar. The round character of nylon-stringed guitars benefits from the open and detailed high frequency
response of the 4006A, especially with the Free Field Grid in use.

While I didn’t have an opportunity during my testing period to try the 4006A in a concert hall (global pandemic and all), based on my experience with it in-studio, it would be at the top of my list to grab for an orchestral or ensemble recording. The omnidirectional polarity paired with its ruler-flat ‘in the room’ response makes it an incredible option for ambient placement on larger sources. Three 4006A mics in Decca Tree formation would do the trick for just about any room miking need. I set up a 4006A with the Diffuse Grid about 15′ away from a drum kit, which blended with the close mics of the kit beautifully, giving a greater sense of depth.

The 4011A lends itself to close miking of all varieties. It has low self noise with impressive max SPL handling, making it suitable for anything you throw its way. Its cardioid polarity also makes it just as viable on-stage as it is in-studio, something that would be trickier to get away with for the 4006A.

I was very excited to try the 4011A on grand piano. When I had the wonderful opportunity to sit down with the late Ed Cherney last summer, I remember he specifically mentioned the DPA 4011 as one of his favorites for miking piano. When I put it to the test, I found it sounded incredibly detailed and natural, with a smooth response throughout the spectrum.

The impact these mics have had on the industry is significant; there’s no wondering why they are often utilized in situations where quality, balance, and authenticity are needed. If I had to choose only one, it would be the 4006A, as its Grid system provides a flexible palette to work with, and I love utilizing omni mics whenever possible. Sonic precision of this magnitude does command a substantial price tag. Either mic is a worthy investment though, and I think it’s safe to say that, after 30+ years of being in production, the DPA 4006 and 4011 microphones have stood the test of time.