Austrian Audio is based in Wien—also known as Vienna. For decades, Vienna was home to one of the world’s oldest and most respected microphone companies, AKG. When AKG closed their Vienna headquarters and moved production out of Austria, all 35 employees chose to continue their passion for microphone design and construction, and Austrian Audio was born.

Out of the gate, Austrian Audio has two microphones on offer: the multipattern OC818 and the cardioid-only OC18. The OC818 on review here builds on its classic Austrian heritage and looks resolutely to the future with some unique options and features. Austrian Audio also makes headphones: the ‘Hi-X55 Over-Ear’, and the ‘Hi-X50 On-Ear’. 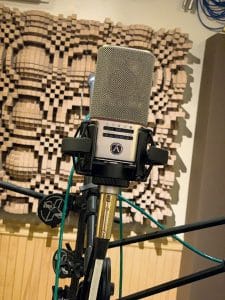 At the heart of both the OC818 and the OC18 is the new CKR12 capsule. It’s no coincidence that it contains ‘C’, ‘K’, and ‘12’ in its name. The CK12 is one of the most significant capsule designs in history. It was initially found in the AKG C12, all iterations of the C414, and the Telefunken ELA M 251. The CK12 design is still widely copied and cloned, and it graces dozens of microphones.

The Austrian Audio CKR12 is more an evolution of the AKG CK12 than a clone or a simple variation. It uses the same dimensions and general design, including its backplate hole pattern and side termination, but in contrast it uses a ceramic capsule rather than brass. The OC in the name stands for ‘open condenser’ and is part of the company’s open acoustic technology. Rather than being mounted at a single bottom point like most microphone capsules, the CKR12 is suspended in a ‘free field’ scenario, at three points, by floating rubber mounts. The capsule assembly also features a diffuser at the bottom of the mic that prevents any reflections from the bottom of the cage. 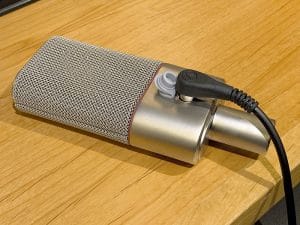 The OC818 is a multipattern condenser microphone housed in a rounded, rectangular body. It’s similar in style to the C414 with its flat, two-sided body, but its overall look is actually more similar to a vintage CAD E100. Three-quarters of its 4 3/4” x 2 3/8” x 1 1/4” body are taken up by a dual-sided, one-piece multilayered mesh screen. On the lower third of its champaign-colored body is its control set.

The OC818 has an all-analog signal path, but its switch functions can be digitally controlled. On the front are three recessed black plastic slider switches. The top one selects between four polar patterns: figure-8, hypercardioid, cardioid, and omni. This switch also has a very important fifth position that allows remote control—we’ll get to that later.

On the flip side of the mic is a multifunction five-pin minijack. Here you can connect an included XLR breakout cable which splits the capsule halves into separate front and rear outputs. It’s also here that you can connect the optional OCR8 Bluetooth remote.

The OCR8 is a Bluetooth remote that is roughly 2″ x 7/8” x 1/4“—about the size of a standard Bluetooth earpiece. When connected and used with the free PolarPilot app (iOS and Android), it offers Bluetooth remote control of the polar patterns, pad, and highpass filter in the OC818. For this to work, the mic needs to be set to the fifth pattern setting described above. Pairing with my iPhone XS Max was simple and the feature worked seamlessly. Using the OC818 with the app and remote, you now have the option of being able to choose polar patterns in between the four patterns on the body! All switching of patterns, pads, and filters is seamless and smooth with no thumps or static bursts. Due to physics, it can take a second or two for the mic to catch up with the app.

This Bluetooth feature is quite handy, especially when you’re alone in the studio or out live, where you can adjust patterns and settings from a distance. 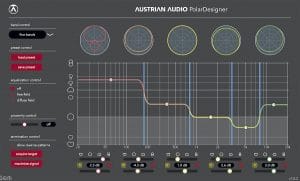 The OC818 has another cool trick up its sleeve: the open-source Polar Designer plugin (VST3, AU, AAX). Here’s where you can take advantage of the two perfectly matched cardioid capsule outs on the OC818. Record the front and back capsules to a stereo track in your DAW, insert the plugin, and now you can proceed to alter polar patterns and proximity

effect after the fact. Note that you need to record the front capsule to input one/left, and the rear to input two/right. Levels on your preamp or interface need to be equally matched in settings, not metered levels.

The OC818 is not the first microphone on the market to offer these capabilities (ex: the Townsend Labs L22 Sphere and LEWITT Audio LCT640 mics come to mind). The good news is that the Polar Designer plugin works flawlessly with them too!

There’s more: Polar Designer offers the ability to get very tweaky and split the mic’s signal into five independent frequency bands, each with its own level and polar pattern response. It also has an automatic Terminator control which can target and eliminate mic bleed such as a hi-hat in the snare mic. Polar Designer does even more, and it’s a real sound shaping tool. It’s deep, and a tad frustrating as there’s no manual available yet, so it’s 100% trial-and-error hands-on learning for now. So far, the tweaky sound designer in me is quite enjoying it.

What about the sound?

Saving the sound for last, the OC818 is a very clean, detailed and opulent sounding microphone. I tested it out side-by-side with a current production model AKG C414 XLS and a vintage AKG C414 EB (nylon ring) courtesy of Wade Goeke at Chandler Limited. The OC818 sits 100% in the modern, clear-sounding C414 family, but with slightly more airy highs. While not as weighty and rounded as the C414 EB, the transformerless output of the OC818 is somewhat more extended in the low end than the C414 EB, yielding a fuller sound rather than a bassier tonality. The OC818 also displays superb off-axis rejection.

This is a mic where there’s no point in highlighting sources—the OC818 loves them all, from delicate strings to rocking guitar cabinets, to drum overheads and piano. It’s also quite lovely on vocals.

The OC818 comes in a classy yet straightforward package that includes an aluminum briefcase, foam windscreen, hard mic mount, the breakout cable, a quick start guide, and a snug custom shock mount that accommodates either the breakout cable or the optional Bluetooth remote.

Handmade in Vienna, The OC818 is sonically versatile and sounds fantastic. It offers unique control and sound shaping options found in few other mics on the market.