This unique-looking speaker sounds incredible anywhere in the room

Before the dawn of pro audio brands, most recording studios employed respected technicians and engineers to design and install custom consoles and monitoring systems. One such studio was Ocean Way (originally United Western), and the engineer was Allen Sides. Now coming full circle, Allen’s famed monitor designs are a pro audio brand by way of the Ocean Way HR Series and Pro2A reference monitors. After eyeing up their distinct look for years, I’ve been insanely curious to check these out.

The HR1, HR2 and HR3 are far-field monitors primarily designed for soffit mounting and professional installs in large scale facilities. Further models include the three-way HR3.5 with dual 12″ woofers, the smaller 8″ HR4, and the new 7″ HR5 Reference Monitor under review here. The HR4 and HR5 are two-way designs, and both give the appearance of a modular horn-loaded cabinet from a traditional PA stack. Despite appearances, these are not the horns from your old high school PA—they’re based on trusted, time-tested Ocean Way designs going back to the United Western era. 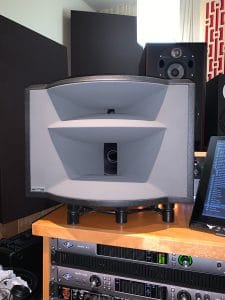 The HR5 is the new ‘baby’ of the line. It’s billed as a near/mid-field design aimed at pro and project studios alike. The gray textured Baltic birch and MDF cabinet measures 17.5″ wide, 12″ tall and 14.5″ deep. Underneath its dual/hybrid (horn) waveguide lives a 7″ aluminum woofer and a 1″ silk dome tweeter with an aluminum voice coil. The Class D bi-amped system (125/90 watts) drives a frequency range of 45 Hz-20 kHz and a max SPL of 110 dB SPL @ 1m. The enclosure is ported in the rear and weighs a respectable 38 lbs.

On the rear of the cabinet are XLR inputs (analog and digital) and a digital output for chaining to the second monitor. Along with a master volume control is a recessed push-button and four LEDs, used to select between analog or digital input, between left and right positioning in a digital setup, and to engage a fixed highpass filter for using the HR5 with an Ocean Way S series sub. There’s also a rear-located power switch and a three-prong IEC power socket.

The dual/hybrid waveguide is key to the HR series. Quoting a conversation I had with Allen Sides, “By putting a straight horn in front of the low-frequency driver and cutting it off, you can take the dispersion, which would normally only be about 40 degrees, and make it 90 degrees so that the low-frequency and high-frequency elements have identical dispersion characteristics. Also, both horns add about 10dB of efficiency to the components, which allows them to work less hard and coast.”

This wide 90 to 100-degree horizontal throw results in an insanely wide sweet spot and a very uniform sound regardless of where you’re sitting in the room.

I set them up in my 12’x15′ GIK-treated mix room alongside my Focal Trio 11 Be monitors and Amphion One18 monitors with the Amp700 power amp.

I would call the HR5 ultra-wide, dimensionally full, and pleasant. While not sub-like or thunderous, the low end is well represented with great detail and depth. Having said that, I would love to experience the HR5 with either the S10A or S12A Ocean Way subs. In comparison, while the Amphion monitors present as more bass and low-mid forward next to the HR5, the bass reach of the Ocean Way monitor extends down farther.

The high end of the HR5 is clear and smooth. It’s closer to the Amphion monitors’ high end than the Focal, exhibiting a pleasant, listenable top-end signature rather than a modern studio monitor brightness. There is zero hint of harshness, bite or fatigue on the HR5, yet they are still quite clear and open.

This openness also extends to the midrange, and here they make the One18 sound comparatively tighter and rounded. Overall the HR5 exhibits a touch more upper-midrange dimension than either of the other monitors.

I initially set up the HR5 monitors as midfields spaced about 7′ apart, with the tweeter just around ear height. Two things struck me here; the first was, whoa—these are wide and spacious sounding. The second was how the sound did not change as I moved around the room, not only back and to the sides, but also forward into the listening triangle; the image never collapsed or shifted.

Next, I tried them as nearfields set up at a 3′ distance. In this setup, the tonality was similar and highlighted how they could work well in a modest-sized mix suite, but by then I was already addicted to the extended depth offered by the midfield setup.

As to the vertical soundstage, I can report that I noticed little in the way of tonal shift whether I sat, kneeled, or stood at a standard listening distance—no more or less than my other monitors.

Lastly, I found Allen’s idea of coasting to be true. The HR5 is quite happy when loud, with no breakup or harshness, and it also maintains its fullness, width and detail at moderate listening levels.

I’m glad I finally got to experience the HR5. The horizontal imaging may be some of the best I’ve heard in a monitor. Once I learned its sound, the mixes I did on them translated well, and I especially appreciated how easily I could tweak vocals and midrange instruments, not because they are pushed forward, but because they are so dimensionally well defined. Rarely do I set up a new pair of monitors and find them this instantly pleasant to listen to and work on.