In our June 2019 issue, we took a first look at the new ROKIT 5 G4 (4th generation), studio monitor from KRK, and found it to be an impressive evolution of the series. In side-by-side comparisons with G2 and G3 ROKIT 5 models, the ROKIT 5 G4 offered a deeper, more dimensional low end. It also provided improved high end detail coupled with a comfortable, non-fatiguing sound. These sonic improvements are due in large part to the migration of the signature yellow KRK Kevlar® woofer and tweeter into the ROKIT G4 line. This month we take a look at the larger ROKIT 8 G4.

There are four models in the ROKIT Powered G4 line: The ROKIT 5 G4, ROKIT 7 G4, ROKIT 8 G4, and ROKIT 10-3 G4. Each model number corresponds to its bass driver size. Note that the first three are two-way bi-amped designs while the 10-3 is a three-way tri-amped model with a 10″ driver and a 4.5″ midrange driver. 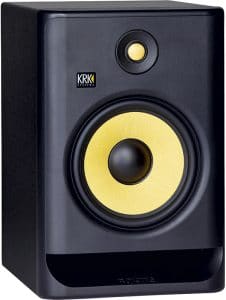 All models in the G4 line share the same 1″ yellow woven Kevlar tweeter; previous ROKIT models had a soft dome tweeter design. As mentioned above, all the other drivers in the ROKIT G4 series now make use of the trademark rigid woven Kevlar cones. In the past, these were reserved for the midline V series and higher-end Expose’ models. Older ROKIT models like the G3 series featured a yellow glass aramid woofer design. The ROKIT 8 G4 on review features an 8″ yellow woven Kevlar woofer in a rubber surround.

The ROKIT G4 series sports a significant visual redesign. Gone are the contoured cabinets of the G2 and G3 models in favor of a more traditional rectangular appearance. The ROKIT 8 G4 measures 15.75″ x 10.47″ x 12.17″ and weighs 22.6 lbs. The low resonance speaker enclosure is made of coated MDF, while the front baffle is made of a textured molded plastic. At the bottom of the cabinet is a huge front-firing bass port. On the bottom of the box is a high-density acoustic iso-foam pad designed to help decouple the speaker from its stand.

The two-way ROKIT 8 G4 is bi-amped with 103W of combined Class D power—almost double that of the ROKIT 5 G4. It boasts a frequency range of 36Hz-40kHz and a maximum peak SPL of 111dB.

Connections on the rear of the cabinet are handled via a single Neutrik 1/4“/ XLR combo input jack.

EQ, level, and system settings are controlled digitally on the rear of the unit, on a large LCD screen with a stepped, continuous, push-button rotary encoder. The page-based menu features 25 possible preset EQ combinations to tweak your ROKIT G4 to taste or to compensate for room and placement issues. You can also adjust the overall output level up or down. In the system menu, you can alter the brightness of the rear LCD screen, the brightness of the front-side backlit KRK logo, and also enable standby mode, which puts the speaker to sleep when no signal is present. You can also lock the settings after you’ve tweaked them to taste.

Despite matching high frequency specs, when compared side-by-side, the ROKIT 8 G4 and ROKIT 5 G4 are two entirely different beasts. The ROKIT 5 G4 is the more mid-focused, punchy and tight of the two models. The ROKIT 8 G4 offers more depth and a super-wide sound stage, not only compared to the ROKIT 5 G4, but even when stacked against any previous ROKIT series model.

Dimension and clarity are the names of the game in the ROKIT 8 G4, as is headroom—these speakers can handle ample levels before breaking up or farting out; a built-in digital limiter has your back when that happens.

It’s no secret that KRK ROKIT speakers are some of the best-selling monitors of all time. Having said that, you do need to know that these are not the ROKIT boxes of old that you’re familiar with. Where the older versions had a reputation for being slightly hyped, bass forward, punchy, room thumping beasts, the ROKIT 8 G4 is a bit more ‘pro studio monitor’ and hi-fi in its sonic presentation. They don’t rumble in the lows, but they can punch nicely and have a compelling low extension that’s more about hearing than feeling. While the highs are crisp and clean, the Kevlar domes do well to tame unwanted harshness. Fatigue at normal listening levels should not be an issue.

Flat out of the box, the new G4 lineup is well-voiced for modern rock, jazz, classical, pop, folk, and country music mixes, highlighting lead instruments, horns, and vocals quite well. Is this revised, more hi-fi sound just as well suited for hip-hop, EDM or room rattling electronica as previous ROKIT generations? Yes! Boost the bass with the rear EQ to obtain the bouncy and beloved KRK low end signature. Rooms and reverb tails on the ROKIT 8 G4 are stunning, and well-recorded music shines on it. It’s hard to argue that this well designed, stylish, great-sounding 8″ studio monitor sells for a mere $600 a pair. These are a nice evolution of an already popular line.

Back in our June 2019 review of the ROKIT 5 G4, we gave advance notice of the KRK Audio Tools app. This free app is now available for iOS and Android and includes six audio tools, five of which are speaker agnostic and will work with any monitor you own. There’s a Spectrum RTA (realtime analyzer), so you can see where there might be peaks and nulls in your listening space. A level meter aids in setting each monitor to the same matched level. My favorite is the simple yet effective Monitor Align that helps make sure the listing angle of each monitor is perfectly matched. Delay helps make sure your monitors and listening position are perfectly time-aligned. Polarity is another simple but effective tool to make sure your speakers are wired in phase. Again, each of these can be used with any make and model of speaker in any listening space. The final tool is called EQ Recommendation. It performs a listening test via pink noise and then suggests which low and high EQ settings to use on the ROKIT G4 monitors. In my home listening space, it proposed the number two low-end cut and flat high EQ. Many of the tools include a signal tone generator with a choice of sine, continuous sine sweep, white noise, or pink noise.

To use the KRK Audio Tools app, you will need a TRS ‘Y’ cable with device-appropriate adaptor to send a signal from your smartphone or tablet to the speakers’ audio inputs.

Download this app and see what it tells you about your setup—it’s free!