The KRK ROKIT is possibly the most ubiquitous studio monitor of the last 15 years. You will find them in bedroom studios, editing suites, and used in full-scale professional facilities alongside monitors costing ten times their price. I might boldly assert that they are the NS-10 of today: Not because they sound like an NS-10, but because they are everywhere—
offering a consistent sound that many engineers know and trust. 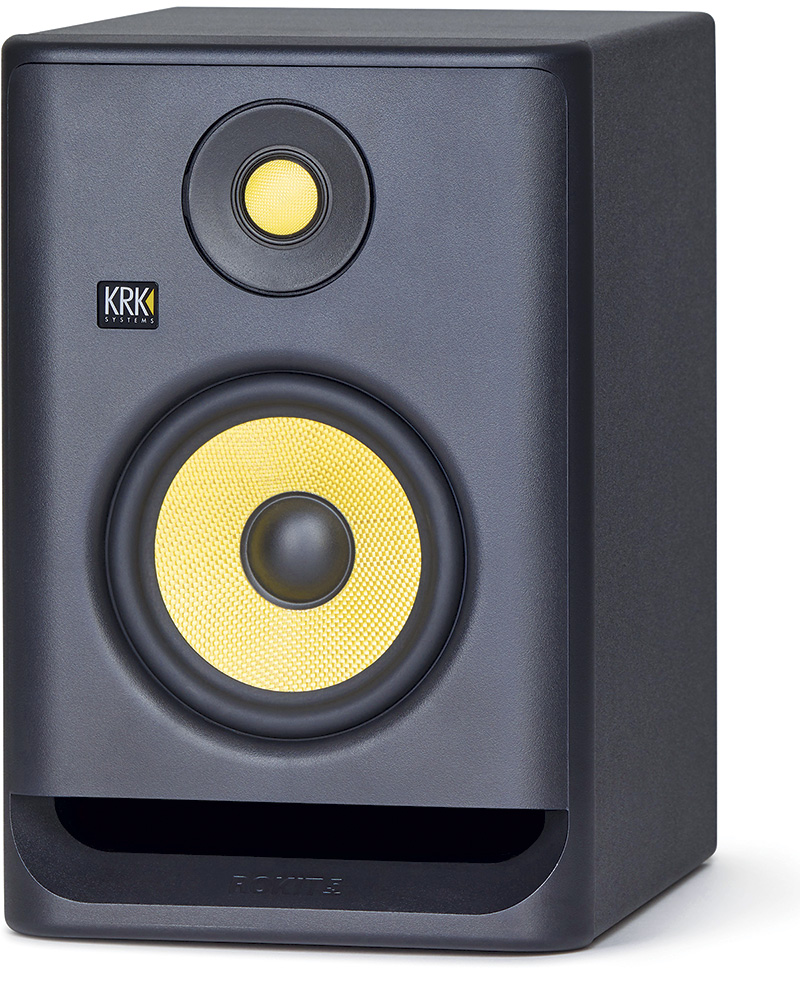 Yellow Kevlar is back

While the previous 3rd-generation ROKITs used a glass aramid woofer design, for the new RPG4 models, KRK is using woven Kevlar. Previously this material was reserved for the company’s midline and high-end models in the V and Exposé series. The 1″ tweeter, which was previously a 1″ soft dome design, is now made of matching yellow woven Kevlar as well.

I was sent the ROKIT 5 G4. Its cabinet size and styling is unmistakably ROKIT-like in appearance, but is a complete redesign from previous models. They are flat-topped with subtly contoured squared edges, with a larger front-firing bass port that spans the entire bottom of the speaker face. This rectangular cabinet design harks back to the original first-generation ROKITs. The new model measures 11.22″ x 7.48″ x 9.49″ and weighs 10.69 lb. There is also a high density acoustic iso-foam pad on the bottom to aid in decoupling the speaker from its surface.

The ROKIT 5 G4 is a bi-amplified design with 55W of combined Class D power. It offers a frequency range of 43Hz–40kHz and a maximum peak SPL level of 104dB. Past ROKIT models offered separate input jacks for balanced XLR, 1/4“, and RCA inputs. The new models do away with RCA inputs, and XLR and 1/4” are now handled via a single Neutrik Combo input jack.

On the back of the cabinet, the new model offers similar controls as past generations, but this time with more options in digital form. Gone are the stepped multiple adjustment knobs, replaced by a large LCD with a stepped, continuous rotary encoder.

Here you can scroll through and select between preset low and high EQ settings, boost or attenuate the output level, and make system adjustments. These include LCD brightness, turning the front backlit logo on, off or dim, or engage / disengage the speaker’s standby mode. This is an increasingly common feature on modern studio monitors that puts the speaker to sleep when no signal is present and returns it to life when signal hits the unit.

One product that has been advertised that will work with the ROKIT G4 to aid with your room acoustics is the new KRK Audio Tools App. According to KRK it is coming soon and will work with G4 as well as V Series 4 and more. We will make sure to give that a thorough review when it becomes available later this year.

As mentioned, I was sent the new ROKIT 5 G4 and I am fortunate enough to still have access to the ROKIT 5 G2 that I reviewed in April 2008, and the G3 reviewed in December 2013. I set all of the models up side-by-side in my studio to my Drawmer MC3.1 monitor controller, and used a level meter and test tones to match levels.

All three models exhibited what we could call the full, punchy ROKIT sound signature, with great bass extension for their size. Having said that, just as my 2013 G3 review stated the G3 to be a complete sonic upgrade over the G2, here it’s even more so. It comes down to three noticeable attributes: clarity, low-end feel, and headroom.

The new ROKIT 5 G4 has an improved high end that is more open and detailed than that of previous models. It is accomplished without being shrill or piercing; the word that comes to mind is ‘comfortable.’ I am guessing this has much to do with the use of Kevlar tweeters in the line.

The sound and the feel of the low end on the G4 is deep, open, and dimensional. It is best described as less blunt than previous models, and offers more low-end detail and nuance than before, most likely due to the use of Kevlar.

Lastly the ROKIT 5 G4 has great headroom—it can really crank, and does so with great clarity and low distortion.  Here I noticed that when compared to the older models, as it went from moderate to loud, it did not compress or collapse in on itself.

The ROKIT 5 G4 is a fantastic improvement on the well-respected ROKIT theme in every way, and proof that great-sounding small monitors do not have to break the bank. I cannot wait to check out other models in the line, and the KRK Audio Tools App when it becomes available.