Kii Audio is a German manufacturer of speakers that excel in both pro audio and home listening environments, which becomes a very interesting statement when one learns that Kii only makes a single product. Can one speaker somehow work well in either a studio or a living room? This speaker can… in fact, it can work well nearly anywhere.

Bruno Putzeys, one of the most highly-respected engineers in the world, came up with the idea of the Kii THREE while designing speakers for another world-class manufacturer. He got to thinking about the problem of speaker directivity, and the fact that low frequencies have much less directivity than mids and highs. (That’s the basic idea behind the satellites- plus-single-subwoofer paradigm; a single sub will supposedly be just fine because “bass is mono.”)

Conventional wisdom—which, to be fair, has served us very well for many decades!—states that because low frequencies are less directional and more penetrating than mids/highs, they require different handling. Absorption and diffusion that works to create a good listening space above, say, 250 Hz, will have little or no effect on bass frequencies, which require the arcana of bass trapping to tame them. That leads to a bunch of rules that we follow when setting up speakers in a studio: understanding that distance from walls and corners will have an impact on bass response, realizing that room modes will cause peaks and dips in various frequencies as we move around, electing to optimize a particular “sweet spot” for listening in the nearfield, and so on.

Soffitted monitors, giant speakers that are fitted into studio walls so the front surface is flush (and the sealed rear of the cabinet is thoroughly damped with in-wall acoustic treatment so bass is much more directional), aren’t just for blasting loud mixes and impressing clients. Their construction is such that when properly installed, they can throw sound a lot farther and give a much wider sweet spot than nearfields can. The key here is, “when properly installed.” Soffits aren’t easy for a novice to get right, and to have effective SPL and clarity in the far field, a speaker has to put out a lot of oomph.

Bruno wondered if there was a way to use different technologies than the tried-and-true method of soffiting to get a “soffitted” directivity from a nearfield monitor. The Kii THREE was the result.

The main idea behind the Kii THREE is a technology called Active Wave Focusing. In very simple terms, here’s how it works.

Inside the Kii THREE are six different drivers: two 6.5″ woofers on the back of the cabinet, one 6.5″ woofer on each of the sides, and a 5″ midrange and 1″ tweeter firing forward. Each of these drivers has its own 250W Class D power amp, adding up to a massive 1500W per speaker. They’re fed by a very powerful DSP engine that adjusts the phase and time of audio to each driver in a very specific way.

We all know what a cardioid mic is, right? It’s a mic that rejects sound from behind it. We take that behavior for granted, but we don’t always understand how it works. On most handheld dynamic mics, a cardioid polar pattern is created by feeding audio to the capsule not only from the front, but also from the back—through vents that delay sounds’ arrival at the capsule. This way, audio sources in front of the mic are reinforced by the vents, while audio sources behind it are canceled out.

The DSP of the Kii THREE turns the speaker into a cardioid emitter at all frequencies; the woofers interact with one another so that bass going out from the sides and back of the speaker is nulled (or nearly so). The end result? A speaker that sounds like all its audio, even the lows, is coming from the tweeter and mid, in a perfect radiating pattern that doesn’t get muddied up by reflections from back walls and the like.

Hearing this technology at work is downright spooky. Bass is tight, plentiful, and amazingly clear, and is so coherent with mids and highs that it’s like you’re listening to a properly- designed coaxial monitor… only better. 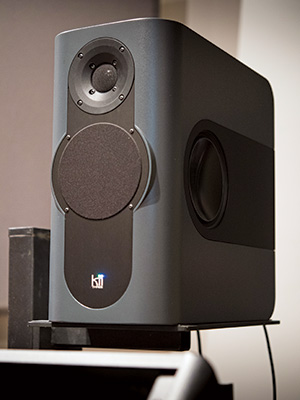 The rear panel of the Kii THREE has connections for audio input (one XLR that can accept either a mono analog signal or a stereo AES/EBU signal), networking (Ethernet jacks for connecting speakers to one another and to the Kii CONTROL remote), and power (a standard IEC jack). There are two small trimpots to select Boundary and Contour, which we’ll talk about below, and that’s it.

Boundary is a semi-stepped control that allows you to adjust for placement very near walls and in tight corners. Kii Audio explains that the Active Wave Focusing works reliably down to roughly 50 Hz, but the speakers are accurate (±0.5 dB) down to a remarkable 30 Hz. In that bottom octave, the omni nature of low-frequency sound manifests once more, and the user can tweak each speaker to dip its response and prevent smearing in the deepest bass.

Contour is a 16-position switch that lets the user set the speakers flat or choose any of 15 combinations of low and high shelving: bump or dip below 300 Hz, combined with bump or dip above either 3 kHz or 10 kHz.

The Kii CONTROL is technically an optional add-on, but it adds so many more features and finer control that it should be considered a necessity. Connecting to one speaker via Ethernet/Cat5 cable, it offers a large volume/mute/dim control, selection of multiple presets, and access to deeper features that pro users will find especially useful—including USB, coaxial S/PDIF on RCA, and a Toslink connector for optical S/PDIF. An onboard display shows volume level.

When using the Kii CONTROL, the user gets much finer control of the Boundary and Contour EQ, and even has the option to tweak settings for an asymmetrical room—unheard of in any other monitor. Speakers can be soloed, inverted, and run in mono or L–R (Mid and Side). After 15 minutes of silence, the speakers switch into Standby mode; there’s no power button.

One critical adjustment is the Latency setting. When tracking or editing in a studio, it’s best to run the Kii THREE in its Minimum Latency mode, where the total delay is under 1 ms and effectively inaudible. The usual critical-listening mode is Exact Latency, where phase coherence is optimized perfectly but at the cost of roughly 80 ms delay.

On paper, the Kii THREE seems like a miracle—or snake oil. There’s no room measurement or room correction involved; the speakers can be plunked down anywhere and they will sound phenomenal, with a huge sweet spot and no smearing or muddying anywhere in the frequency response, from 30 Hz all the way up to 25 kHz. You just feed them audio and they do their magic. They simulate the behavior of a soffitted monitor, without the soffit. You can be close to them (like insanely close, under a meter) or far away (in a large enough room), and they’ll just sound right.

What about real-world performance? To find out, I went to the headquarters of Kii Audio’s US distributor Grace Design in Lyons, Colorado, to do critical listening in Grace’s beautiful in-house studio. Eben Grace was kind enough to sit down with me for several hours and walk me through the technology behind these speakers… and then he stepped back and let me listen to my reference library and to tracks I was working on mixing.

The results were magical to the point of being scary. I have never heard monitors just “get out of the way” like this before: you’re not listening to the speakers, you’re listening to the music. I had to get really close in before things fell apart (like, under 2 feet), and I could get up and walk around the room without a noticeable loss of soundstaging or frequency balance.

The Kii THREE is incredibly efficient and powerful. I’ve been told that their performance starts to suffer at ear-shattering volumes, but they have so much juice that they reach comfortable/safe listening levels with plenty of headroom to spare… and in a final insult to the laws of acoustics, they seem to laugh off the Equal Loudness Contours! Their frequency response doesn’t appear to be strongly affected by listening level, so you can work reliably at very low volumes and your mixes will translate well when they get loud. I have no idea how they do it, but they do.

When I expressed my amazement to Eben Grace, he just smiled and dropped the final bomb: because of their cardioid dispersion and tight control of audio, these speakers can be used anywhere—and, in fact, the worse-sounding your room is, the more amazing they’ll sound. No acoustic treatment needed? Apparently not.

Eben invited me to take the Kii THREEs and set them up in a truly horrible room, just to see what would happen. I plan to do that soon, and when I do, I’ll write up my results. In the meantime, I am left with astounding memories, and a sense of regret that at their current price, I can’t just run out and buy these speakers right away.