Austrian-based LEWITT has made a name for itself since 2009 with its eye-catching, innovative microphones and audio devices. Recently LEWITT upgraded its flagship BEATKIT PRO drum mic package. The BEATKIT PRO comes with seven drum-centric mics tailored for peak percussive performance.

We reviewed the original BEATKIT PRO 7 as part of a roundup of drum mic packages four years ago (January 2019). The kit still includes the Kick-focused DTP 640 REX (reviewed February 2013), the dynamic MTP 440 DM snare mic (reviewed May 2018), a trio of DTP 340 TT tom mics, and new to the BEATKIT PRO package, a pair of the company’s popular LCT 140 AIR condenser mics (reviewed October 2019). 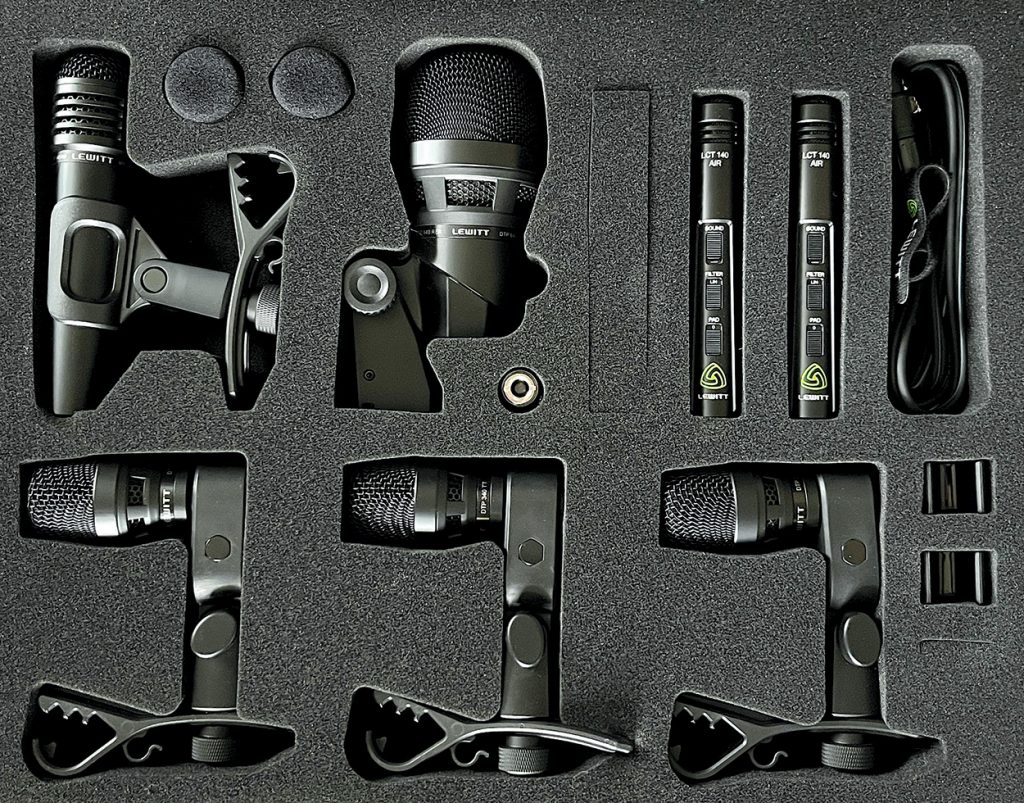 The BEATKIT PRO collection comes in a hefty and rugged mil-spec case with snug spots for each mic, drum-specific mic mounts (with room for the mounts to remain attached to the mics) and foam windscreens for the overhead mics. As a touring drummer, I would have zero worries or concerns with this case being loaded into the back of a tour bus, equipment trailer or thrown into a trunk on the way to the studio. I always appreciate it when a product comes with its own case, especially one as well-made as this.

With the case open, let’s dive into each mic that the BEATKIT PRO includes—starting with the DTP 640 REX kick drum mic.

The DTP 640 REX is a beast and possibly my favorite mic in the set. It is solidly built with an impressive weight. Like most kick drum mics, it features a built-in adjustable swivel mount.

On the top of the mic are a pair of recessed attenuation switches. The first is for attenuating the volume down -10dB or -20dB. The second switch activates a built-in EQ circuit that alters the characteristics of the built-in mic capsules. You heard me right—there are two mic capsules inside the DTP 640 REX.

Behind the robust grille of the DTP 640 REX, you will find both a dynamic capsule and a condenser. These stacked capsules both feature a fixed cardioid polar pattern and are perfectly phase aligned and ready to plug in and go.

A specialty breakout cable plugs into the mic via a 5-pin connecter. It splits the two signals into individual XLR outputs to dial in your perfect blend of dynamic punch and condenser clarity. With the included tone switch, you can set each capsule flat, boost the low-end of just the dynamic capsule, or simultaneously boost the mids of the dynamic (4-6 kHz) and low frequencies of the condenser. 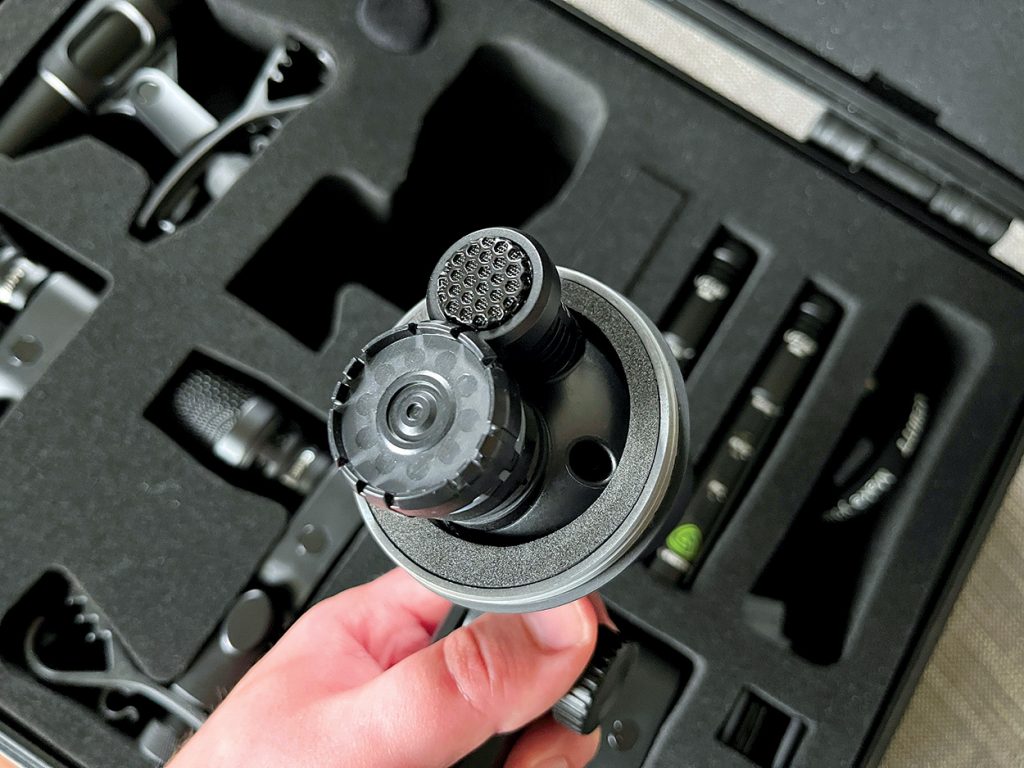 I was surprised at just how different the two capsules sound when positioned just inside the port hole of my kick drum. The dynamic capsule delivered the sound I am typically accustomed to with most dynamic kick offerings—tight, defined and with just the right amount of boom.

The condenser picked up considerably more of the beater attack and offered substantially more low-end reach with the third tone setting than the dynamic capsule on its own.

A wide range of sounds are produced by using it inside the sound hole, on the outer kick head alone, or even with an additional kick mic to use in the mix down.

It also sounded absolutely killer on my 16″ floor tom. I have always been a fan of kick drum mics as tom mics, and the DPT 640 REX is no exception. Having one mic sonically cover this much ground in the studio is invaluable.

The MTP 440 DM snare mic is a cardioid pattern dynamic mic tailored to make your snare drum sound shine. After the heft of the DTP 640 REX, I was surprised to feel the light weight. It comes with a standard mic clip and a common sawtooth-style drum mounting clip (favored by many mic companies).

As I began clipping the included mount onto my snare drum rim I ran into the same problem I often do with my main drum kit. My Gretsch Brooklyn kit is fitted with 302 vintage-style “stick chopper” hoops, which are significantly higher than standard triple flange or die-cast hoops. After a bit of force, I did get them on successfully. This shouldn’t be a problem for most common drumsets. Just be aware that some drum rims might not be ideal for these types of clips.

As I always do on snare drum mic reviews, I placed a Shure SM57 next to the MTP 440 DM for reference, as it’s a well-known sound. In comparison, I found the MTP 440 DM slightly darker than the SM57, with a bit more throaty mid-range. Nicely, it’s not so dark that you lose the stick attack or snare buzz, though. I tried metal and wood snare drums at various tunings, and the MTP 440 DM kept up with me the whole time, delivering a great punchy sound.

At higher tunings, it did a great job of taking some of the “edge” off, while with lower gut-punch tunings, it enhanced the low-end and offered a controlled and hefty punch. The MTP 440 DM is undoubtedly versatile enough for any drummer or engineer to have in their mic locker. According to LEWITT, the legendary session drummer Kenny Aronoff has crowned it as his favorite snare drum mic. [It’s also a great flavor to have on hand for electric guitar amps.—Ed]

The BEATKIT PRO comes with three DTP 340 TT dynamic mics designed for toms. These have a supercardiod pattern and are about half the size of the MTP 440 DM and, again, surprisingly light. Each one comes with a custom adjustable mic clip and one of the drum clamps mentioned earlier.

The supercardioid pattern does an excellent job of reducing bleed from the cymbals and other parts of the kit. The DTP 340 TT delivers a balanced, tight, and what I might call a bit of a dry sound. While I prefer cardioid mics on toms bleed and all, I could still get plenty of use out of the DTP 340 TT with a bit of tweaking in post to coax out my preferred sound.

Last is the matched stereo pair of LCT 140 AIR cardioid condenser mics. The name is entirely appropriate, as these are incredibly lightweight. There are three switches on the top of the mic. The first switch selects between a flat frequency response or the “Air” setting. Air adds a 5dB 10 kHz boost accentuating a sparkling, but never harsh high-end. The second switch is an 80 Hz low cut, and the third switch engages a -12dB pad.

A Pair of Air

I tried the LCT 140 AIR as stereo overheads, room mics and as a hi-hat mic. In a spaced overhead pair setup they sounded balanced, capturing the highs, mids and lows in a pleasing and natural-sounding way.

Flipping the Air setting on and the low cut, the sound was bright, sparkly and expectedly less hefty. This was my favorite setting on overheads as it allowed the close mics to provide the low-end focused punch and overall definition, with the overheads staying out of the way and presenting remarkable “airy” detail.

As a hi-hat mic, the Air setting and low cut also performed best by naturally reducing the unneeded low-end chuff in the hi-hat sound. This allowed the high-end detail to shine without becoming abrasive.

In a stereo room setup, I preferred everything flat and neutral. This captured the full presence of the kit and a sense of space in my home studio, which has a vaulted ceiling.

As we saw in our past review, LCT 140 AIR is equally great for acoustic guitar, piano and strings as well. They probably won’t spend much time in their case, even after drum tracking is done.

Despite my personal mic clip struggles, it is a huge plus of drum packages such as this to not need mic stands for every mic/drum when recording, which can create a precarious labyrinth that’s hard to navigate through to get to your kit.

The LEWITT BEATKIT PRO is a fantastic collection of drum mics for anybody looking for a great-sounding, versatile turnkey solution to miking up a standard 5-piece drum kit.

At $999, it’s still affordable enough to be a first pro-level drum mic package or simply a great addition to add new flavors and options to an existing recording setup—plus, it now includes the versatile LCT 140 AIR.