The IK Multimedia Advanced Room Correction System, or ARC, has been around for over ten years. It utilizes standalone measurement software in conjunction with a DAW plugin to compensate for shortcomings in your listening environment. The third-generation ARC system introduces many significant improvements in terms of both accuracy and user experience. We’ll dive into what’s new in this upgrade as we cover all the basics of setting up ARC from scratch.

With regard to acoustics, recording in small spaces (like mine) is inherently problematic. Whether it’s a converted office, bedroom, or basement, the small room always comes with its own set of resonances, low frequency modes, and reflections. Proper speaker placement can help make the most of a suboptimal situation. The next logical step is to throw some mid/high absorbers at the points of first reflection—an easy and cost-effective way to improve your monitoring situation. Yet, these basic treatments do little to address the 800-pound gorilla in the room—low frequency buildup. Putting bass traps in the corners can help, but many home studios can’t afford to give up the space required to do it properly. Fortunately, we can address buildup issues with software solutions that provide huge benefits—and conserve precious physical space in your small studio at the same time.

Will ARC System 3 turn an untreated space into a state-of-the-art mastering facility? Well, no—the laws of physics prevent that from happening. For example, if your room has reflections causing phase cancellation at a particular frequency, using a software solution to add more energy at that frequency won’t solve the issue—in fact, it might do more harm than good. Instead, a combination of thoughtful acoustic treatment with an accurate and surgical digital solution like ARC 3 can yield the best transformational results. 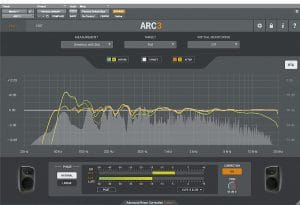 The leap from ARC 2 to ARC 3 is significant. The release literature states that it uses an all-new 3D room analysis algorithm (based on 3D VRM technology) and a more streamlined setup process. ARC 3 also adds compatibility with additional measurement microphones using a calibration file or any RTA microphone.

I used the IK Multimedia ARC MEMS microphone, which can be bundled with the software. The ARC MEMS microphone was first launched with version 2.5. MEMS technology improves the overall consistency of the measurement process, as the microphone itself can be reliably reproduced with less variance from mic to mic. This enhanced consistency allows the software to more accurately interpret the measurement data, translating into better monitoring. 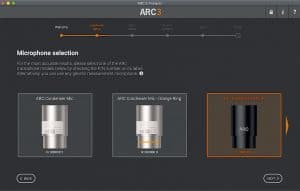 The measurement process takes about 10 minutes to complete. Once you select your microphone model, it has you select a listening area. This can depend on your room size, type of monitoring, or where in the room you’d like to optimize the response. For example, it’s possible to save a calibration profile optimized for the back of the room, say, the client couch behind the mix position. Once captured, it’s easy to toggle between profiles.

The measurement process starts with the microphone roughly six inches below your ears, and does a tone sweep from seven different perspectives, prompting you to move the microphone between each sweep. The software states that microphone placement doesn’t need to be too precise, so don’t worry about a tape measure – it’ll be close enough for rock n’ roll.

The process is repeated with the microphone at ear level, and a third time six inches above ear level. While there’s quite a bit of microphone shuffling, the process itself goes quickly. Once all the measurements are complete, you can name the profile, and you’re good to go—it’ll show up in the plugin version of ARC 3. 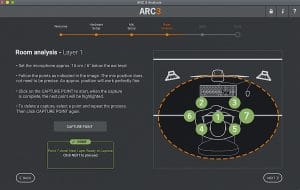 My home studio has minimal acoustic treatment. I have a few broadband absorption panels and two ceiling panels, but I don’t have any bass traps. The ARC 3 plugin revealed a significant (+6dB) peak around 50-60 Hz, followed by an equivalent dip (-6dB) at around 150 Hz, with only a few minor variances throughout the midrange (+/- 3dB), and then a smooth tapering off above 15 kHz.

With ARC 3 processing applied, the change in response was quite pronounced. Kick drums sounded noticeably less boomy with the 60 Hz range brought back to earth, and I felt like the low midrange had a lot more body and detail than before. I didn’t realize it, but my room’s low end was masking a portion of the low mids. The processed response sounded tighter, with significantly greater clarity and balance. I was also very pleased with how natural it sounded; I couldn’t detect any unnatural phase shifting or digital artifacts.

The trim knob is handy for before/after level matching. In my case, the processed signal was softer, but I found that the plugin was prone to distortion when gained up to match. This didn’t bother me too much however; I left the trim at -6dB (the default) once I was confident in what I was hearing (and also in the understanding that the plugin is always bypassed for bounces—the change in level won’t affect the final output).

The plugin has two phase settings: ‘natural’ and ‘linear’. Various metering is available, as well as different virtual monitoring setups, such as car stereo and phone. In the edit window, the calibration curve can be set to ‘sharp’, ‘default’, or ‘broad’. These settings change how aggressively the corrective EQ curve is applied. I found that the default setting sounded most effective for my space, but the broad setting might be better for rooms that require extensive correction.

I only wish it wasn’t limited to a plugin! How about a standalone version that can be applied for applications outside of a DAW, such as streaming music or web browsing? SoundSource by Rogue Amoeba is one possible workaround, but I would love to see this happen in a future upgrade. [IK replies: Third party workarounds are addressed at www.ikmultimedia.com/faq/index.php?id=1261]

Making an impressive difference in the room is one thing, but how does the mix translate elsewhere? After listening in my car and at the studio, I’m quite delighted that the troublesome low end problems I once had with my home studio are now significantly less pronounced. My mixes sounded tight and balanced, which was all I needed to hear for ARC 3 to earn my trust when mixing.

Even though ARC 3 may provide more dramatic results in untreated environments, think of it as a supplement, not a substitute, for acoustic treatment. My experience with ARC 3 feels bittersweet. Sweet, because I don’t want to mix without it at home ever again, and bitter, because why have I not tried this before now? Seriously. The price point (especially with the MEMS mic included) is so approachable for what you get—this is a no-brainer studio upgrade in my book. Unless you have a professionally designed room (and maybe even then), there will be improvements to be had with this system.