One of the most unique speaker designs gets an upgrade

Finnish speaker company Genelec has been a leader in monitoring for over 40 years. Throughout its history, Genelec has always been at the forefront of new and innovative technologies, including patented waveguides and sustainable sourcing of materials for manufacturing. As a result, Genelec has earned precious real estate sitting on the meter bridges of first-call engineers worldwide. 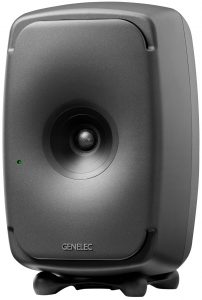 Arguably the most unique looking speakers in the world, the flagship Genelec monitor lineup is aptly named, ‘The Ones’. Somewhat resembling a pair of black eyes staring at you, there’s a lot of methodical science and innovation behind their unique design. The coaxial mid-hi drivers float like an island in the middle of their enclosure, giving little evidence as to the amount of sheer power on tap. Its point source design provides precisely controlled dispersion in both planes, resulting in impeccable imaging and phase cohesion. Hidden behind the full-sized waveguide lives a pair of Acoustically Concealed Woofers (ACW). Each is an obround 8 5/8” x 4″ woofer located on either end of the enclosure, behind the slotted openings on the top and bottom of the cabinet. The concept behind this design is to provide a tighter and more controlled low end than what’s possible with one larger woofer. Genelec states that while the two speakers have a combined area roughly equivalent to that of a 10″ woofer, their positioning gives them the directivity of a 15″ woofer.

The Ones were first introduced in 2014, and several of the original models have been previously reviewed in our pages. The newly upgraded 8351B comes alongside the recently released 8361A and W371A models; editor Paul Vnuk partook in their premier at London’s Metropolis studio last September. The upgraded 8351B is part of the 8000 SAM series (Smart Active Monitor), which utilizes Genelec GLM software. GLM takes acoustic measurements to account for imperfections in the room, manages phase relationships, and offers precise control over larger systems. We’ve covered the setup, function, and benefits of the GLM-SAM monitor relationship extensively in past issues of RECORDING (November 2015, March 2019). GLM Version 4.0 is now available in beta on the Genelec community website. It features an updated, contemporary GUI as well as Catalina support. The final release version is forthcoming. 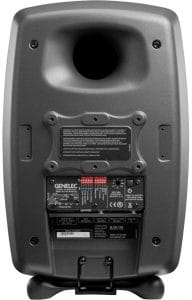 The back panel hosts several connections and features, as well as a bass reflex port. There are two RJ45 sockets for use with the GLM system, an XLR AES input, an XLR AES digital pass through, a balanced XLR analog input, and an IEC power connection.

Also on the back panel is a series of dip switches and controls for making adjustments based on your acoustic environment. These will come in handy if you forgo the GLM system tuning, but are a bit limited in capability by comparison.

The leap from the 8351A model to the newly upgraded 8351B introduces quite a few improvements spanning electronic, mechanical, and acoustical design advances. While both models are tri-amped, the 8351B has received an upgrade across the board, boasting 250W for the woofer, 150W for the midrange driver, and 150W for the tweeter (upped from 150W x 120W x 90W). All three amplifiers are now Class D. Other noteworthy improvements include additional room compensation EQs, improved headroom, a new 32-bit floating point DSP module, and redesigned coaxial drivers.

The first Genelec coaxial driver originally appeared in the 8260A (2009) before showing up in the 8351A. Second generation coaxial drivers launched with the 8331A and 8341A. The new 8351B features the third generation coaxial driver—a completely new design with neodymium magnets (instead of ferrite) to reduce the mass of the driver. The 8351B has a 1″ tweeter (upped from 3/4“), resulting in higher SPL capability and extended bandwidth up to 43 kHz. It also features a larger voice coil to provide more power handling. Crossover points have changed from 470 Hz to 320 Hz, and 2.6 kHz to 2.8 kHz, resulting in better overall performance with lower distortion. The maximum SPL level has increased, from 111 dB to 113 dB, though I didn’t try to verify that one personally. 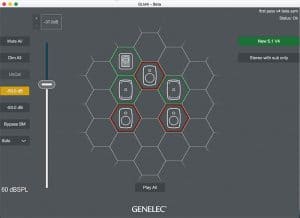 I’ve mixed on Genelec 1031A monitors every day throughout the majority of my career, and I mix on the 8330A when working from home. Needless to say, I know these speakers inside and out, and feel quite confident that my mixes will translate beyond the control room. I felt like a kid on Christmas morning when The Ones arrived at the studio for testing. I set them up right next to the 1031A pair and did some extensive listening and mixing for several weeks.

The first thing that struck me wasn’t frequency related—it was the imaging. The 8351B sound enveloped the control room’s sweet spot in a way I haven’t previously experienced, with a three-dimensional and immersive quality.

In terms of frequency response, the top end has that familiar detail and openness for which Genelec is known. While some might classify it as bright, it sounds quite natural to my ears. The midrange is a bit more pronounced than the response I get from the 1031A. I wouldn’t classify it as mid-forward, but it feels a bit more balanced by comparison, especially in the 1 kHz to 8 kHz range. There’s a significant amount of detail and clarity that sits comfortably between the openness of the high frequencies and pronounced low end. The lower mids are full, but in typical Genelec fashion, far from any sort of mud or washiness. Which leads me to the low end…

I would describe the experience of the low end as impactful. Its extension has no problem reaching the depths of human perception while doing so in a beautifully controlled and precise manner. This is the most impressive part for me—the tight and controlled accuracy of it, even in subharmonic frequency ranges.

I had a chance to configure the 8351B with the 7370A subwoofer we have here at the studio. After going through the GLM calibration process to tighten up the response and phase alignment, the 2.1 system filled the studio with enough sound to lure the neighboring engineers in to have a listen. It’s truly an impressive system, and the GLM component makes significant improvements when A/Bing the processing (and I appreciate the detailed frequency chart outlining the changes being made). I don’t think a sub would be needed with these monitors, but the integration is seamless should you choose to add one into the system.

It didn’t take long before I was mixing confidently and with more precision. Perhaps that’s partly because I’m already accustomed to the signature Genelec sound, but the 8351B feels right at home for both mixing and hi-fi listening. They are as inspiring as they are revealing when it comes to mixing, which is a delicate balance not many can achieve.

This level of sonic perfection and technological innovation comes at a steep price. If you’re in the market for monitors of this pedigree, I would recommend
auditioning the newly upgraded 8351B, as it provides everything ‘One’ could need in a studio monitor.