A new Swedish mic builds proudly on a classic lineage

Today we introduce you to the latest update of a 39-year-old classic European microphone from an equally classic 80-year-old Swedish microphone company. That mic is the VIP-60, the newest incarnation of the venerable Milab VIP-50.

Our story begins in 1941 in Stockholm at Rune Rosander’s Pearl Mikrofonlaboratorium (translated as Pearl Microphone Labs or PML). In 1958, Rune created his inaugural rectangular capsule design, the 2700, and this would find its way to the Pearl DC-96 microphone in 1967. In 1978, Rune’s son Hans broke away from PML to form Milab ( Microphone Laboratories), which used Rune’s rectangular capsule designs in parallel with PML. Both sides reunited in 2017 when Milab acquired PML, and today both companies are under the same roof.

In 1983 Milab updated the DC-96 to the DC-96B and released its flagship VIP-50 microphone the following year. The VIP-50 offered multiple patterns, pads and low-end rolloff options in a highly compact package for its day; both mics were based around the rectangular 2700 capsule.

In 2006 Milab introduced the DC-196, a multi-pattern version of the DC-96B featuring a new 2900 rectangular capsule design. This capsule was also used in the transformerless DC-96C in 2012 (reviewed in June of that year). The now-discontinued DC-96B continues to be one of my favorite solid state condensers (and a bit of a secret weapon in my studio), offering what I described in that review as a neutral and natural performance with a nice classic rounding to its top end.

Now, after almost four decades, the VIP-50 gives way to the new VIP-60. In addition to some circuit tweaks, just as the DC-96C adopted the 2900 series rectangular capsule ten years ago, now the new VIP-60 does as well. 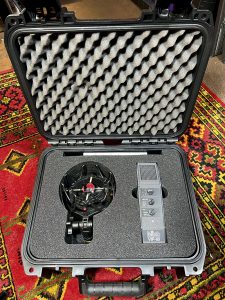 The new VIP-60 uses the same body, head basket, controls and features as the VIP-50. The primary visual difference is that the VIP-60 uses a metallic gray Nextel coating while the VIP-50 was fished in a black coating. Both mics are housed in a 6.7″ tall, 1.85″ wide and 2″ deep slanted rectangular body that looks like a cross between an army surplus relic and a vintage electric shaver. The capsule sits inside a large open-screen mesh. Just below the capsule on the front of the mic are a trio of plastic multi-step circular switches. The top switch selects among five polar patterns: omni, wide cardioid, cardioid, hypercardioid and figure 8. Next is a three-position bass rolloff switch (flat, -6dB/oct. at 200 Hz, or the same at 500 Hz). Last is a three-position pad switch (0, -10dB, -20dB). Under the controls is red phantom power indicator light.

The XLR connector and a built-in European threaded mic mount are on the bottom. Note, this was previously used to connect a ball-and-socket stand adaptor, but now the mic ships with a Rycote InVision USM shock mount in a deluxe hardshell SKB case.

Like the 2700 capsule designed in 1958, the new 2900 capsule features a 1.5″ x .5″ rectangular polyester diaphragm with an aluminum-sputtered membrane seated in a specialized custom internal shock mount. According to Milab, the 2900 offers lower self noise and a wider frequency response than the 2700; the VIP-60 has a self noise of 14dB vs. 18-19dB on the VIP-50.

The VIP-60 has a 20 Hz to 20 kHz frequency response. The individual (non-smoothed) frequency plot that came with the VIP-60 I received reflects a very flat and neutral mic with a slight (1dB) lift in the low end at around 40 Hz to 100 Hz, followed by an equally slight scoop between 100 and 500 Hz. On the other end of the spectrum, there’s a .5dB rise at around 4 kHz followed by a 3-4dB dip at 7-8 kHz. This rises back through 0 at about 11 kHz where we find a 2dB scoop and then an almost -10dB scoop at 13-14 kHz that rises back up to 18 kHz before rolling off. Compared to the similar non-smoothed graph that came with the VIP-50 I was sent for comparison purposes, the two mics are near identical in the lows and mids, with the upper frequencies of the VIP-50 being less active. It’s not that the VIP-60 is brighter—it sounds just a touch clearer.

While there are no published graphs for the polar patterns on the VIP-60, switching patterns reacts in standard fashion, with omni being brighter and more open and the figure 8 side being thicker in the lows and more forward in the highs.

The VIP-60 has a nice off-axis response—not so much a sharp cut as a firm but gentle tonality rolloff. The VIP-60 has a well-controlled proximity effect that lessens as you move away three inches or more, but it never sounds thin or anemic.

The VIP-60, like the VIP-50, is a very smooth, rich, neutral-toned microphone that would be easy to categorize as vintage by today’s open and airy mic standards. It inhabits the same sonic spectrum as classic pencil condensers like the Neumann KM84 or even a classic ribbon mic—not that it sounds like either, only that it captures sound similar to each where no sound is pushed, sculpted or hyped. As such, it would be easy to label the VIP-60 as dull or even warm, but actually it’s the mic’s neutrality that creates this perception. In some ways, the VIP-60 has two personalities; in wide-cardioid and omni modes, the capture sounds open and dimensional.

Up close in cardioid mode, the descriptive word I keep flashing on is intimate—especially on vocals, where it sounds like there is nothing between the singer and the mic, or when in a good room, nothing around the singer and the mic. All this to say, the VIP-60 is a gorgeously silky smooth and present vocal mic.

Nicely, the VIP-50 and VIP-60 are close enough in tone that I was able to use them as both spaced drum overheads and in a classic Glyn Johns setup, and in both cases they captured the drum kit in a smooth and classic way reminiscent of the dry and intimate drum sounds of the 70s.

On acoustic guitar, the VIP-60 is very subject to placement, and I liked the sound better by the 12th fret or higher, and away from the body and soundhole, with the 200 Hz rolloff engaged to control any boomy body resonance.

The VIP-60 is also a nice percussion mic, working well up-close or at a distance for more of classic, back-of-the-room sound.

All in all, I am just getting to know the VIP-60 (it’s only been out a few weeks as of this writing). It reminds me of why the VIP-50 has been so popular for so long. I would not hesitate to use it anywhere I might reach for my Milab DC-96B, thanks to its pattern choices, versatility with regard to distance and depth, and the rolloff and pad options, not to mention how clean and clear it sounds. I keep reflecting on how amazing this mic is on vocals. It’s not inexpensive, but it may be worth the price of admission alone as your studio’s premier intimate vocal microphone.