Earthworks is known for making high-quality microphones for the studio and stage. Its microphones notoriously reproduce clean, crisp, and accurate sound with an ultra-fast transient response, extended frequency range, and very low noise. I’ve used a pair of omnidirectional QTC40 mics in the studio for years, in a variety of applications. I’ve come to rely on them as a means of capturing sources without coloration. The SR314, as with all Earthworks microphones, is designed to reproduce an exceptionally natural sound with high fidelity and reliability. It’s a high-definition handheld vocal mic intended for live use, but let’s see what it can do in the studio as well.

The SR314 is a transformerless condenser microphone with a fixed cardioid polar pattern. It’s designed to have low handling noise to perform well on stage, and can withstand up to 145dB SPL. It’s built from solid stainless steel and weighs 1.5 lbs. It feels very balanced and solid in the hands, and the resilient stainless steel is a great choice to withstand the abuse of touring. Frequency response ranges from 20Hz to 30kHz with a signal-to-noise ratio of 79dB (A-weighted).

The SR314 is not only designed to capture its source with absolute clarity, but also to reject off-axis material in a natural-sounding way. This enhances its ability to withstand more gain without creating a feedback loop. The rejection of sources at 180 degrees is superb, and it still offers a reasonably wide sweet spot to allow the vocalist a good range of movement without drastic changes in sound quality. The polar response chart indicates that the tight cardioid directionality stays true through 6kHz, and then starts to open up a bit. From about 12.5kHz and beyond, the response pushes into an omnidirectional territory. I was a bit worried about running into bleed issues with cymbals on stage, but it never created any issues for me. The frequency response chart shows a very flat response within +/- 3dB throughout the entire spectrum. There are slight peaks around 10kHz and 15kHz, a slight dip around 4kHz and 8kHz, and a gentle roll-off below 100 Hz.

The SR314 comes with a standard plastic mic clip and soft fabric case. While the soft case doesn’t provide maximum protection for a microphone of this price, the microphone itself is built like a tank, so it shouldn’t be much of an issue. I’m a fan of the stainless steel aesthetic; it seems to hold up against fingerprints surprisingly well, keeping it looking clean and shiny with minimal effort. The stylized double-layered pop screen that surrounds the diaphragm almost seems like something from the 1970s. It’s not often that you find a practical and attractive design in a microphone intended for live use. The pop screen extends down almost half of the microphone, which should also aid in keeping vocalists’ hands in the proper position. Unscrewing the screen reveals a classic Earthworks-style design with a tapered thin head housing the small diaphragm. It looks great on stage, and every musician I put it in front of was excited to sing into it, which says a lot. 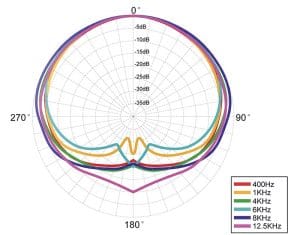 The first thing that jumped out at me about the SR314 was the top end. The high frequencies sound natural and forward, but avoid sibilance on most vocalists. The naturally bright sound puts the vocalist comfortably forward in the mix, which should create less work for the FOH engineer. It doesn’t sound overly exaggerated; it comes across airy and smooth. It might be a bit of a shock to some vocalists, especially those who are used to gigging with beat-up dynamic microphones, but the SR314 instantly struck me as bringing studio-quality sound to the stage.

The low frequencies sound very tight and focused, especially in the 125 to 200 Hz range. It provides enough body and substance to create a well-rounded sound without ever muddying up the signal. There were a couple of instances of the pop-screen letting a few plosives through, but for the most part, it held up decently well. The well-rounded response carried through to the midrange, which sounds evenly balanced and accurately represented.

The polar response sounds very natural to my ears, striking a balance between providing a wide enough sweet spot for live use, and rejecting off-axis material that may cause feedback. Overall, I’d classify the polar pattern to be very tight, and the off-axis rejection to be excellent. I’ve been burned by overly-sensitive condenser microphones on stage in the past, a lesson all engineers learn sooner or later. Still, even when singers inevitably ask for “more me!” in their already cranked wedges, the SR314 keeps it together. It’s well equipped to endure high SPL levels before having any issues in that department.

Even though it’s designed for live use, I was very curious to throw the SR314 on a stand in the studio and track some acoustic guitar with it. If it can perform as well as it does on a noisy stage, why can’t it thrive in a treated studio?

The quick and punchy response provided a nice and percussive attack for the strumming. While some microphones tend to get a bit clinical sounding if they’re heavily focused on accuracy, the SR314 does an excellent job of providing a musical and vivid sound. I didn’t get an opportunity to try it, but I suspect it would make a decent snare top mic in the studio as well, especially given its transient response, airy top end, and its ability to take levels up to 145dB.

I’m most impressed by the off-axis rejection of the SR314. It’s very well-suited for the stage and truly brings studio-quality fidelity to the task. If you have any experience with Earthworks microphones, this falls very much into the same family of natural, balanced, and detailed sound. The only issue I had was with plosives. Singers get right up on the mic during live performances, and the screen did a nice job in catching most of it, but some heavily emphasized P’s still popped through. The quick responsiveness provides punch, and the top end offers a smooth and detailed sound that pushes vocals to sit comfortably on top of the mix.