The biggest, baddest, and most potent ‘One’ of all

Based in Iisalmi, Finland, Genelec has been crafting some of the most used and respected loudspeakers globally for over 43 years. In 2014 Genelec launched the 8351A, which would spawn a series boldly proclaimed as ‘The Ones’. Equal parts modern art and cutting edge technology, each one of The Ones is housed in a precision-sculpted aluminum enclosure and features a uniquely implemented three-way coaxial design. Each model is part of the Genelec Smart Active Monitor (SAM) family, and they can be expertly tuned to their environments using the Genelec Loudspeaker Manager (GLM) system. Today, we are looking at the biggest ‘One’—the flagship Genelec 8361A.

Over the years and overseas

I penned our inaugural review of the 8351A in the November 2015 issue, followed by a dual review of the smaller 8341 and 8331 in March 2018. In September 2019, I was invited across the pond for the world premiere of the second generation 8351B (reviewed by Alex Hawley, September 2020) and its new big brother, the 8361A, at London’s Metropolis Studios. After having experienced both models, plus the Genelec W371A adaptive woofer system in mixing, mastering and immersive audio scenarios, I now get to spend some time with the 8361A in my studio.

The one about the coaxial design

While the 23.37″ x 14″ x 13.63″, 70 lb. sculpted aluminum, Minimum Diffraction Enclosure (MDE) nods to the more traditional Genelec 8000 series design aesthetic, looking at the front of the 8361A still begs more questions than it answers. As I wondered in the original 8351A review, “Where is the woofer, and why is a lone tweeter floating in the center of the box?”

The 8361A is a Minimum Diffraction Coaxial (MDC) design. The 1″ dome tweeter is positioned in the center of a 5″ cone midrange driver. These drivers are centered in a Directivity Control Waveguide (DCW) that spans the speaker’s face, offering precisely controlled horizontal and vertical dispersion while delivering highly detailed imaging and phase cohesion.

The one about the low-end

While you can’t see its dual Acoustically Concealed Woofers (ACW), you will hear and feel them. Each one is an obround 5.4″ x 10.34″ design located top and bottom behind the waveguide with upper and lower slots. 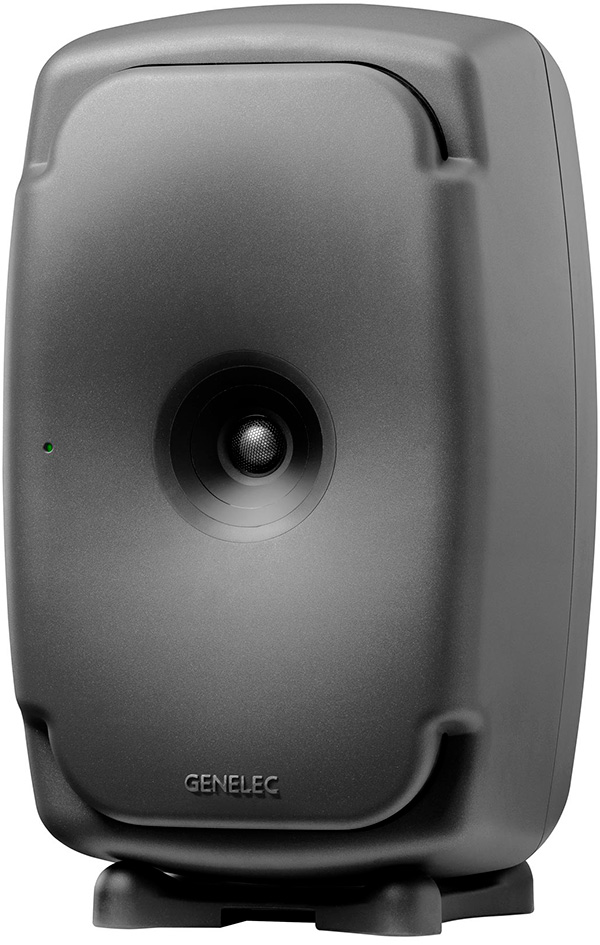 We have covered GLM many times over the years. GLM at its heart is a Genelec-designed control and calibration system for use with any of its SAM series monitors. The GLM kit includes an RJ45-equipped USB interface, measurement mic and cables.

New in 4.1, GLM features AutoCal2, which compensates for both constructive and destructive frequency non-linearities, and provides improved discrimination between direct and reflective energy. Like AutoCal 1, it also compensates for time and volume between speakers; my room ‘pulls to the left’ if you will, thanks to the location of a door, so this is a big help.

The new 4.1 update brings an option for ‘Extended Phase Linearity’ to The Ones. Previously available for the 83xx two-ways and the S360 main monitor, this internal DSP filtering offers a flat linear phase extension down to 100 Hz. The net result is an even better and more cohesive soundstage which is essential for immersive audio set-ups.

To use GLM, you place the mic in the listening position(s); the software ‘shoots’ the room, and correctively compensates for tonal anomalies (such as nulls) so that the monitors sound as accurate as possible in the space. Settings are stored in the monitors and can be further edited and controlled in the software GUI. GLM has a lot of tricks up its sleeve, such as the saving and recall of multiple rooms, configurations and systems, further EQ tweaks, level control and cloud-based options. However, what I like most about GLM is that it is easy to set up, and it just works.

While essentially a large, powerful three-way monitor, size-wise, the 8361A is pleasantly compact when compared to similar three-way designs. It can be placed horizontally or vertically and comes with its own built-in rubber Iso-Pod base.

On paper, the 8361A is a tad overpowered for my 12X15X8′ treated mix room, yet I have found that working with powerful three-way monitors allows me to dig deeper into a mix with plenty of room-filling sound and power, minus the need to push the level. Because I already have two other sets of monitors in place and because of the presence and power of the 8361A, I set them up a tad wider than usual and compensated by backing up accordingly (luckily my mouse, keyboard and monitor controller are all wireless).

The 8361A offers a huge, effortless, three-dimensional sound—open, clear, and appropriately bright without being piercing or fatiguing, even with aggressive music genres. The lows are full and rich and above this, tight low-mids and open, natural-sounding upper-mids. While many monitors try hard to offer booming lows, forward punchy mids, and bright top-end signatures, the 8361A is not that. Genelec has crafted a monitor that is neither clinical nor too sweet, designed to allow you to focus on every detail of your mix. In many ways, the 8361A sounds like there is nothing between you and the music.

While the 8361A sounds big, clear and powerful on its own, the GLM system further opened up the spatial image and cleaned up the low-end bloom in my space. I was initially disappointed that it somewhat tamed the bass, but I was more than pleased with the increased low-end accuracy it provided in return.

A final strength is the phase-accurate focus of the coaxial design, which offers a gorgeous depth in the sweet spot, along with a sound that remains tonally constant as you wander around the room.

I am not sure what adjectives I can add to what has already been said about this amazingly modern speaker line in our pages over the past six years. The 8361A is simply a well-crafted, detailed mixing tool of the highest order. As you may guess, they are not exactly an inexpensive option, but speakers of this pedigree rarely are. PS: Trust me, spring for the GLM kit!