Katz also then became more aware of just how musically inclined many in his family were. “My mom played piano and sang and my dad played guitar and saxophone,” he reminisced. “So, anytime I showed any interest in music, my parents were extremely helpful and supportive. I found out later in life that my great uncle was a drummer, my grandfather on my dad’s side played guitar, and my grandfather on my mom’s side played trumpet. You could say that music kind of ran in the family.”

The aforementioned out-of-tune piano in his grandparent’s house was just the beginning. “At age four I’d pull out the ‘piano for beginners’ books and spend hours trying to learn what notes were, how to read music on the most basic level, and I’d get excited every time that I was able to play a phrase correctly. My love for music continued by singing in a couple school talent shows in elementary school, and I found myself playing any instrument that I could get my hands on. I eventually learned to read music with ease. My dad gave me my first electric guitar for my 11th birthday. I took lessons, started writing my own songs, and played in bands.”

Between the love of both gear and music, Katz’ progression to make a career in the engineering side of the business was beginning to take shape.

“When I was 16, my band wanted to record a demo,” he said. “We went to a local kid’s home studio, and that’s what sparked my interest in recording. After that experience, I bought my first DAW, Cakewalk Home Studio 2 XL. I had no idea what I was doing, but it was exciting. After three years of learning and experimenting on my own, I decided that I wanted to pursue music production as a career.”

Katz had expressed this interest in attending a recording school to his friends. One of them had a friend who had attended The Conservatory of Recording Arts & Sciences (CRAS), and who was then working at a studio in Los Angeles. After doing a little research, it seemed like the perfect place for Katz.

“Living in Las Vegas, I had my eye on The Studio at the Palms located at The Palms Hotel and Resort after I discovered that one of the albums I had was recorded there,” he explained. “I looked up the studio’s equipment and realized that if ever wanted to work there, I would need to know how to use large format consoles and tape machines. It didn’t take a lot of research to realize that CRAS was the best place for hands on learning. The school’s emphasis put on analog recording in the curriculum was exactly what I needed if I wanted to work in a world class studio. After learning that CRAS taught exactly what I needed to learn, had the equipment I needed to learn on, wasn’t too long of a program, was relatively inexpensive, as well as provided internship placement assistance…it was a no-brainer.

So, Katz applied to CRAS and was accepted.

CRAS, Katz said, is as close to a perfect learning environment as possible. “The teachers are experienced engineers that not only know, but actually use what they’re teaching us. Prioritizing knowledge and concepts in the curriculum is perfectly tailored toward an actual understanding of real-world audio workflow…from the most basic concepts to the most advanced techniques. CRAS expands upon your current knowledge while providing extra courses and certification programs to keep you learning and engaged throughout the program. The ability to have hours and hours of hands-on experience, run real sessions and, most importantly, make mistakes and learn from them, sets CRAS apart from any other program out there. Adding the required internship with placement-assistance guarantees an all-encompassing experience only available when you attend CRAS.”

Kratz graduated CRAS in April 2008 after interning The Mix Room in Burbank, Calif. He then set his sights back on The Studio at The Palms.

“I called The Studio at the Palms immediately following my internship,” Katz explained. “I spoke directly with Zoe Thrall, the director. She was in the process of hiring a new production assistant and I ended up getting the job along with another CRAS graduate. I lucked out because nobody had been hired there for a year and a half prior, and nobody was hired for year and a half after I started. I know that being a CRAS graduate gave me the edge I needed to get the position over the other applicants. I landed my dream job at The Studio at the Palms, and that’s where I stayed for more than 11 years working my way up to engineer.”

At the beginning of 2020, Katz ventured out on his own, crediting the experiences and opportunities acquired through being one of the head engineers at such a prestigious studio.

Katz’ only goal as an engineer was to receive one Platinum Album in his lifetime. He achieved that in less than three years after graduating CRAS.

What advice does he have for CRAS students? Listen! 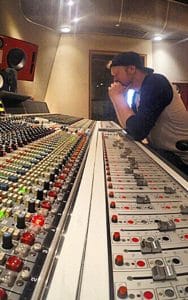 “CRAS gives you every tool you need to enter the world of audio,” he said. “Once you leave CRAS, you will be among people who have been working in the industry for decades. Look at these people as your next level of education. They know how to survive in one of the most competitive, ever-evolving industries in the world.  Every person that you meet will have a unique experience and outlook that you can learn from. Never be too arrogant to learn from those around you. Remember, learning what you don’t like about someone’s workflow or approach is equally as beneficial as learning what you do like. The entire field of audio is based on your ability to listen.”

Not everyone wants to be in the music business.  Some want to be in video games, post for movies and television, broadcast, live events, etc. Whatever the case may be, Katz concluded, “If you set goals, work hard, and sprinkle in a little luck here and there, you’re going to have a long career.”

The Conservatory of Recording Arts & Sciences is composed of two nearby campuses in Gilbert and Tempe, Ariz. A CRAS education includes broadcast audio, live sound, film and TV audio, music, and video game audio, all taught by award-winning instructors who have all excelled in their individual fields, including sound reinforcement, audio recording and production, digital recording, troubleshooting/maintenance, and music business.