Big Bear Audio is a London-based audio manufacturer. All of its products are designed and built completely on British shores using British-made materials. The first two Big Bear products to hit the market are a pair of microphone preamps: The MP1 and MP1+.

Both are modules designed for use in an API 500 Series-style enclosure. Each one is a discrete electronically-balanced preamp; the MP1 is a transformerless design while the MP1+ adds a transformer to its output stage.

Both models also have an additional trick under the hood—they offer a pop-in slot for the addition of a DIYRE format Colour Module. The DIYRE website (diyrecordingequipment.com) states that Colour Modules are designed to be “real analog plug-ins,” and we had a chance to try three of them inside the MP1 and MP1+… but first, let’s learn about the preamps themselves.

There is nothing vintage or even basement-boutique when it comes to the look and styling of the Big Bear preamps. Both MP1 models use the same faceplate and controls; the only way to tell them apart is to look inside or twist a knob. Each one features a modern contoured thick faceplate that is coated in a rubberized textured midnight blue with matching knobs and buttons. It is such a deep rich blue that when powered off, the buttons and controls all but disappear. Luckily the unit is internally backlit—when powered on, the controls of the preamps glow a neon light blue.

Other than the company and preamp names as well as the number 48, both units’ level knobs and four push buttons look like they are scrawled in an ancient alien dialect. Thanks to the manual, we know the push buttons are (clockwise from the bottom right): 48v phantom power with LED indicator, input select for the rear balanced XLR mic input or the front unbalanced 1/4“ instrument input, Colour module bypass, and phase/polarity invert.

Levels are controlled by the top two knobs and displayed on a 5-stage LED level meter. Both units offer a gain range of 60 dB; the input gain control on the MP1 is a fully variable rotary control from 6–66 dB, while on the MP1+ it’s a high-quality stepped ELMA attenuator with a range from 0–60 dB. The smaller variable output control is attenuation only, from –20 dB to 0 dB. 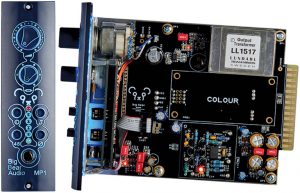 The inside of each preamp is clean and well laid out, with audio-grade capacitors in the chain. The output of the MP1 is a Burr-Brown op amp, while the MP1+ uses a Lundahl LL1517 transformer.

Neither preamp needs a Colour module installed to function as a preamp; when this is the case, the Colour module button becomes a mute. The uncolored sound of the op amp-based MP1 is very neutral and clean. It is very much its own thing, rather than an emulation of anything past. Compared to each other the transformer-based MP1+ has a tighter low end and slightly saturated gentle highs for a tighter and more focused edge, while both the lows and high end of the MP1 are open and full, giving it a dimensional edge.

For reference, if you put heavily-colored tube preamps on one side, classic clean solid-state console preamps in the middle, and ultraclean straight-wire/high-sheen preamps on the other side of the spectrum, I would place both Big Bear preamps in between the console and straight-wire preamps, and would say they have just the right elements of both.

Colour outside the lines

On their own each preamp sounds great, but it’s the addition of the Colour slot that brings these preamps to another level.

The Colour Format is the invention of DIYRE, and as the branding implies, these modules are usually available in DIY kits or fully assembled. The entire concept is open source, and more than a few companies have jumped on board with preamps, audio processors, and more, all plugging into 500 Series module enclosures (an enclosure inside an enclosure!). Charlie Slee of Big Bear Audio says that rather than being spot-on replicas of what they set out to emulate, they are more akin to Instagram filters for audio, i.e. fun approximations.

The modules themselves are simply miniature circuit boards populated with transformers, miniature tubes, transistors, chips, op amps, etc., on the top surface. Underneath are a set of 4 snap-on feet and a multipin chip connector that gently seats into place on the abovementioned devices. Just remember to power down your rack before swapping 500 Series devices and Colour modules, and make sure to press them into place straight down with equal pressure from all sides to avoid bending pins. Take them out the same way.

Modules run between $25 up to $129 and come in all kinds of flavors: microphone preamp audio paths, compression circuits, equalizer bands, tape saturators, and more. The Big Bear Audio website offers a selection of 17 DIYRE Colour modules; for this review, I was sent three of the preamp-focused choices. 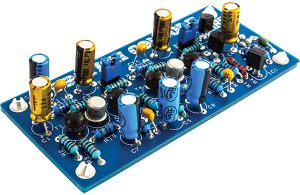 The British Console module is a class-A discrete circuit with a pair of independent semi-opamps and 1960s/1970s-era New Old Stock (NOS) silicon transistors. It is obviously Neve-inspired and optimized to offer 2nd-order harmonics with an asymmetrical clipping pattern. Thanks to a pair of internal jumpers, it can also be set to add an additional 8 or 16 dB of input gain and saturation.

In use, the British Console is the most saturated and intense of the three flavors I was sent, especially when pushed with the 16 dB setting—it can be nicely overdriven, and even pegged. I liked running signal into it just at the threshold of clipping/drive, especially on drums, bass, and vocals, where louder levels of sound drive gently into overdrive and yield a very convincing classic 1960s sound that reminds me of the early warm clipped sound of Decca-era Rolling Stones. In other words, a classic British Console, just like it says on the tin.

This module pairs best with the transformered MP1+ to my ears, especially when chasing that vintage warm drive described above. That said, it also balances well with the MP1, which opens up the sound nicely while retaining the gentle drive. 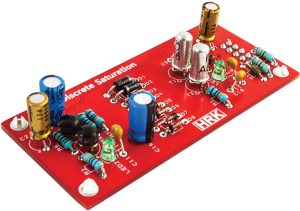 The Discrete Saturator is, as its name implies, a fully discrete class-A signal path, but one that uses both German-made NOS germanium and USA-made silicon transistors as well as both germanium and silicon diodes. These add diode-based saturation and gentle circuit-driven compression to the sound. Like the British Console, this module is by the UK firm Bart HRK (hence the price in Pounds).

Of the three Colours I was sent, this one is my favorite for general all-around use. It’s not as driven or thick as the British Console, but still adds a nice dusty texture to the tone that is subtle on its own, and stacks nicely when multitracking. It’s vintage in nature but not heavy-handed, and very much as I would imagine a showroom-new late-1950s/early-1960s germanium-era console might sound.

I like this module best when paired with the openness of the MP1, where it adds a beautiful texture that retains its 3D depth and sounds great on low-end sources like DI bass. If you want a fuller mid thrust, and want to be closer to a vibey vintage tone, then I would pair it with the MP1+. 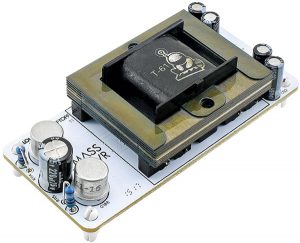 The Mass Drivr is made by Louder Than Liftoff, whose Chop Shop 500 Series Filter/EQ was reviewed in April 2014. The Mass Drivr is fitted with both a custom steel wound transformer and one of LTL’s integrated 2520-style Rogue Six discrete op amps. It’s based on a vintage API 325 line amp.

Of the three modules I was sent, it gets the closest to hitting its target; it has an API-ish sound, with the most open top end of the bunch. Overall it sounded like a nicely roughed-up version of my trusty API 512C preamp: the same tone, but a nice hint of gritty air on the Mass Drivr. This one pairs best with the MP1+ if you want solid vintage tone through and through, but works well on the regular MP1 for deep low end and bass.

I really enjoy the paradigm of the Big Bear preamps and the DIYRE Colour universe. It is both creative and just flat-out fun. It makes you want to experiment with tone and vibe.

With just two preamps and three modules, I had an instant choice of eight sonic possibilities in a very small footprint. The only downside is that if you want to mix and match often, pulling the preamps out of their enclosure and swapping modules can get fiddly. The other downside is that you will probably want to collect Colour modules like trading cards, so be ready for the addiction!

There are other companies offering preamps as well as tone boxes for DIYRE modules, and while I have not heard any of the others yet, none of them look this unique and boutique. These are easily the most futuristic 500 Series modules I have ever seen or used… which wouldn’t matter if they didn’t sound great.

That’s not an issue here. Even without the Colour modules, these preamps sound fantastic on their own, and they’re really affordable for everything you get. Big thumbs up to Big Bear Audio for a unique and worthwhile new take on mic preamplification!