Sonible is an Austrian company that’s earned its reputation on the success of a handful of filter plugins, including the AI-assisted Smart EQ Live and Smart EQ 2. smart:comp is an AI-powered compressor and it’s the latest release by Sonible.

smart:comp combines an easy to use broadband compressor with a sophisticated multi-band spectral compressor that analyzes and tonally balances over two thousand frequency bands. According to Sonible, it accomplishes this by employing a ‘content-aware AI-based system’ called smart:engine.

Any confusion caused by this description dissipates quickly as you start working with smart:comp. Getting good results is incredibly easy, and with just a bit of tweaking, truly great sounds are at your fingertips. Let’s get started by looking at the interface and tracing the workflow. 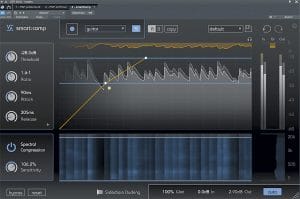 The interface is divided into two main panes. The upper pane shows a dynamic display of the incoming audio. The two horizontal lines running across the display represent the compression threshold and the gain change ratio. You can click and drag these or use the rotary knobs to the left to adjust the values. There are also controls for attack and release. These are standard compressor functions, and very nicely implemented here.

The fun AI magic begins when you light up the Learn function. From a drop-down menu, you can select a profile that matches your source audio—male and female vocals, keyboards, guitar, drums, etc., and Sonible has confirmed that more profiles will soon be released, including bus profiles. The AI engine analyzes the dynamic character of the incoming audio, and the display becomes active with a scrolling waveform. Within a few short seconds, smart:comp automatically and intelligently sets all of the compression parameters—just like that!

The waveform shows the compressed audio superimposed over the original. The very top of the graph provides a visual representation of the gain change amount in play. 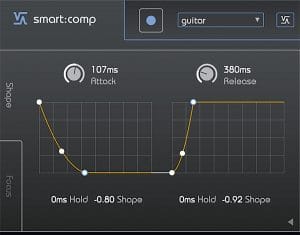 You can tweak any of the values to suit the tune and your vision for the mix. Using the visual attack and release shaper allows you to make more granular changes (click the little arrow beside the release knob to reveal the shaper). You can adjust the time and slope of the attack and release behaviors, as well as the compressor hold time—a nice touch.

There’s also a powerful focus view tool, which allows you to set the frequency range that the detection algorithm focuses on (or ignores). You get a visual representation of the audio, making it easy to detect particularly energetic frequency ranges. You can choose to filter around elements that you’d like to have punch through—a snare, for instance—or focus on areas you want to see attenuated. There’s a lot of audio joy to be found in these functions! 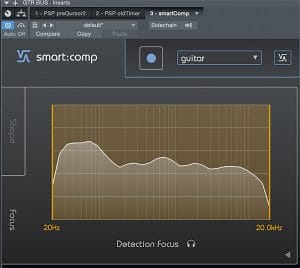 Gloriously, smart:comp lets you sidechain into the spectral compressor. When spectral ducking is engaged, the control track will intelligently attenuate at the frequencies shared with the controlling track. Again, you can limit the range of frequencies that will be affected, making this one of the most effective side chain compressors I’ve ever worked with.

I was working on a mix project while doing this review; I used tunes from it to test smart:comp. I started by subbing in smart:comp on tracks where I was already applying a bit of compression. In every case, the results delivered by the AI gave me something useful. The AI generally comes back with fairly low ratios and modest thresholds, resulting in subtle but very musical gain management.

In the case of smart:comp spectral compression, I had to re-think some processing. I went back to the tracks where I had inserted smart:comp and turned off any EQ that was also being applied. I reset the smart:comps and the new
results instantly became more defined.

Subtle things gained prominence. A triplet guitar figure that was being obscured by the strummed guitar part popped out in the mix. Tonal subtleties came to the fore, and harshness receded. In some cases, the processed smart:comp audio alone was superior to what I had done with multiple plugins. In every case, I was able to tweak out a very useable result—different from what I previously dialed in, but very useable, and kind of humbling.

Spectral Ducker on a drum loop 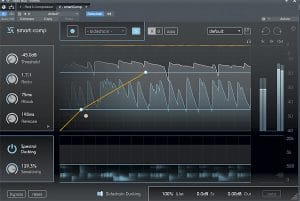 The spectral ducker might be my favorite feature. One of the tunes I was working on had a drum loop as a prominent feature of the rhythm track. The kick in the loop, despite some surgical EQ, kept getting lost. Using that track to control the bass via sidechain resolved the issue. It took a bit of time to adjust the sensitivity and frequency range, but boy was it worth it! The kick now sits beautifully in the mix, and the attenuation of the bass guitar is so subtle, it’s not even noticeable.

I also used this feature to attenuate ever so slightly the guitar bus using the lead vocal as the control track. The vocal got a tiny boost of prominence, which made a massive difference in the overall mix. Again, I fussed with the sensitivity and the frequency range to get the best results.

smart:comp on a drum bus 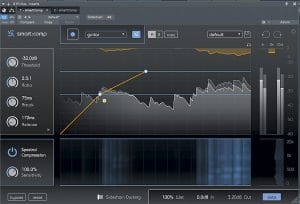 The broadband compressor is transparent yet effective. Spectral compression adds an x-factor; by adjusting the sensitivity of the analysis algorithm and by tweaking the frequency range, you can hone in on a smoothness and focus that would be much more time consuming to dial in with multiple plugins. This tool is excellent on buses!

I ended up swapping out most of my other compressors with smart:comp. A huge bonus: smart:comp is relatively easy on the CPU. A few tracks still worked better with character-type compressors, but for most tracks smart:comp achieved the gain management I was looking for with the bonus of sculpting tracks tonally in a very sophisticated and effective manner. Another bonus: I ended up using a lot less EQ.

Beautifully, the plugin has an auto gain setting, which means you don’t have to raise and lower the gain when you toggle the compressor in and out for preview; it adjusts itself, so you’re not biased by a louder or quieter signal post-compression. I love this feature!

When considering adding smart:comp to your audio tool chest, you’d be doing it a disservice to view it as being just another compressor. It’s really in a distinct and unique category all its own. There’s a lot of bang for your audio buck here—and you can filter out the bang if that’s an issue!