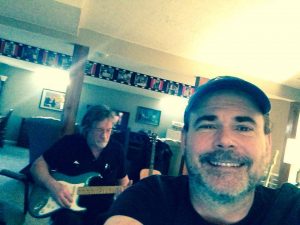 PC with PreSonus interface running PreSonus Studio One, Tapco mixer, Behringer Truth B2031A monitors, Yamaha bass, and “the guitar used was a first-year Les Paul Custom that I have owned since 1958.”

The Studio in which the songs were recorded is SENDING SOUNDS STUDIO , owned and operated by Paul Stottman and all the songs were written by Cliff Jordan in Louisville KY.

“Those Louisville Blues” is a male vocal blues/rock song. Cliff Jordan wrote the track and played/sang everything. Paul Stottman took care of the recording end of things.

In his production notes, Cliff tells us that “Those Louisville Blues” was the first non-instrumental he ever recorded. After three attempts at wearing all of the hats, he enlisted Paul’s help, a fruitful decision that led the guys to forming a band together.

As with the majority of our submissions, Cliff’s track is something of a mixed bag. While we applaud him for tackling all of the sound sources (not easy, friends!), we found both the timing and mix balance to be questionable in spots.

Starting with the rhythm section, the guys did a solid job with the drums. We hear a nice room ambience on the kit, organic in a good way! Unfortunately the bass guitar volume overwhelms the drums though our monitors, resulting in the two dance partners not meshing as they should. The electric guitar again has a nice ambience, sounding distant in a way that gives the track a slightly ominous feel, lending a cool, spooky JJ Cale vibe to the proceedings.

The vocal recording carries that feel as well. We are unsure if Paul used the same processing for the guitar and vocals, but they share a “family resemblance” to our ears. As for the timing issues, while nothing is positively out of time, there is a looseness to the track that makes it wander uncomfortably in spots.

In our experience, a click track can be an
invaluable asset in certain instances, none more than when one is layering all of the instruments individually. Of course the
other advantage is that the click allows for some tightening up of parts to a grid in software.

Now before we get all “yeah but the Stones never used a click”, please remember that those tracks captured a band playing mostly live… and they sped up like crazy! That said—and this is key—they sped up and slowed down in sync, as a unit. In Cliff and Paul’s case, if there was a click, we suggest going back to Studio One and “do the Tighten Up” (Archie Bell and the Drells, kids, Google it!).

While you’re there, try backing the bass guitar volume down until it plays nice with the kick drum, and then rebuild your mix with that new foundation.