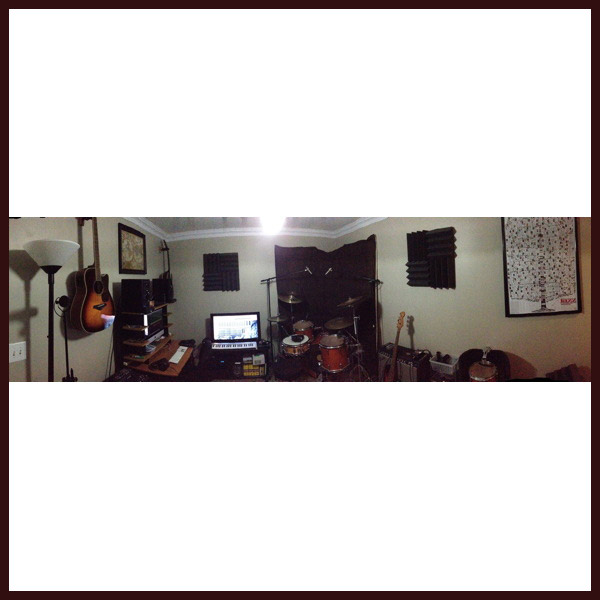 This month’s Spotlight is a fabulous cooperative effort that sparkles with an incredibly powerful yet clear and open sound. On first listen we were struck by the intriguing mashup of sounds and rhythms that comprise the track; it’s kind of a Grateful Dead meets Led Zeppelin mix with some folky vocals tossed in, and yet it all seems to work!

Starting from the ground up, Andrew has fashioned a very interesting rhythm section sound. Using a combination of mics from Oktava, Shure, Audix and AKG, he has captured an impressive open sound on the drums that is virtually free of overtone, even though the drum arrangement and performance itself tends towards the busier side of things. The tom tones are a thing of beauty through our monitors, as are the delicate cymbal sounds. No crash and bash here, folks!

On the flip side, the bass guitar tone is low and somewhat distorted in the mix. Unlike many instances of distortion that we encounter however, this one sounds completely thought out/executed and adds to the overall yin-yang vibe of the track.

Moving on, we positively love the guitars that Zach laid down. “Crystalline” would be an apt descriptor of the sound that Andrew captured, and the performance, in concert with the movement of the drum fills, is intoxicating. Kudos to Andrew for his panning choices on the guitar tracks as well; clearing out the center of the mix provides a huge space for Zach’s unique vocals.

Speaking of the vocals, they are captured and perfectly presented here in our opinion. The marriage between Zach’s voice and the Oktava MK319 is ideal, and the vocal seems to soar over the mix without artifact. Well done!

We would be remiss if we didn’t mention a few other things here as well. This track has an advanced sense of movement and excitement built into the arrangement. We have already discussed the interplay between the guitars and drums as a major factor for this, but the addition of a vibraphone (keyboard generated?) into the blend really seals the deal. On the surface it may appear that this secondary sound source was an afterthought, but to our ears it was a brilliant addition. Finally, Andrew must be complimented for his mix: no overprocessing, artifacts, or masking anywhere to be found. Top it off with some obviously quality mastering from Andy Mitchell and viola, Spotlight indeed!

Over my twenty-plus years at the helm of Readers’ Tapes/Tracks, I have been constantly amazed at the breadth and scope of your submissions to this column, loyal readers. I have learned so much from your efforts, and applied many of these lessons to my own work. Nowhere is this more true than with our Spotlight features, and Andy and Zach’s inspired track joins the ranks for certain. I suggest you follow my lead… listen and learn, my friends!