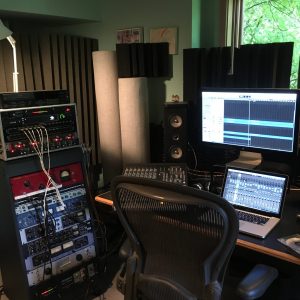 “I’m Holdin’ Out” is a male vocal rock song. Paul wrote the song, sang the lead and background vocals, and played rhythm and lead guitar. The remainder of the band were Mary Fagan on keyboards, Jon Bresler on rhythm guitar, Jon Gabay on bass, and Ed Raczka on drums.

In his production notes, Paul relates that he and the band intended the recording to serve as a live club demo, emphasizing energy over perfection. While the band has achieved a strong high-octane performance, there are several “devil in the details” issues that hamper the final product.

Straight off the bat, we dug the overdriven electric rhythm guitars—nice and crunchy, befitting the song’s driving tempo. Paul’s panning choices provided some nice width to the track here as well. We were equally impressed by the snare drum tone, deep but articulate. The rest of the rhythm section was less successful to our ears. The “pillowy” off-center kick drum seemed to lack focus, while the accompanying bass was underpowered through our monitors.

Moving on, we were stuck by a volume disparity regarding the vocals. The lead vocal was mixed way out front of the other sound sources, while the background vocals were pushed back and quite narrow in the stereo field. Lastly, Paul lists keyboards and acoustic guitar in his notes, but sadly we were unable to detect them through either our monitors or our Grado SR 325 headphones.

A few quick adjustments are all it should take to get things in shape for Paul and the band. We would start by raising the profile of the kick drum/bass guitar. We’d love to hear more snap and definition on the kick and significantly more volume on the bass to compliment the great slashing guitars.

As for the vocals, bringing the lead voice back into the mix would give it less of the disembodied overdub feel that currently plagues it. Once that’s accomplished, spreading the backing vocals out in the stereo field would breath some welcome air into the center of the mix.

We also would encourage all of you loyal readers out there to double check your mixes with your production notes prior to submitting your work. We’re not sure what happened to the keys/acoustic guitars listed, but as we said earlier… it’s in the details.