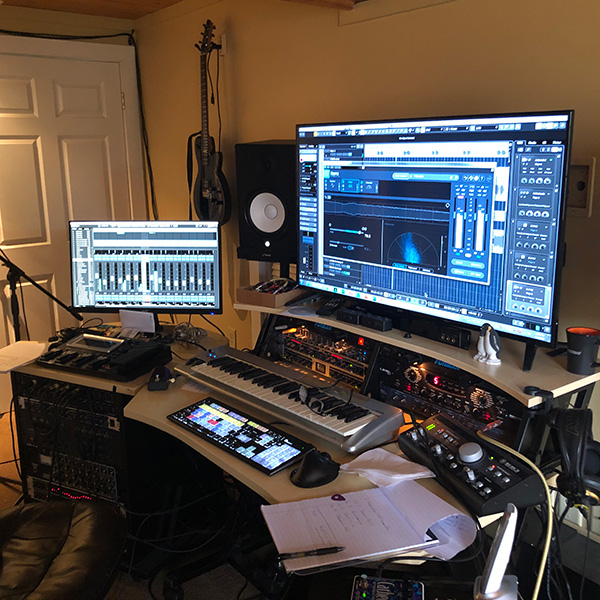 This high-octane blues-rock track is firing on all cylinders straight out of the gate. Starting from the bottom up, Bob has done a bang-up job on his drum programming via the Addictive Drums software—it sounds like an actual player behind the kit, from the 60s skip snare straight through to the excellent tom fills. Well done! Sadly, the bass guitar fares less well. The off-centered bass comes across as disassociated from the kick drum, and the tone is often mushy. This is due in part to the fact that it shares nearly the exact same placement as an electric rhythm guitar would in the mix. Speaking of the electric guitars, the opposite-panned rhythm instruments are featured rather prominently, and unfortunately, they overwhelm Bob’s fine lead guitar playing (except in the breakdown sections). We also must mention—the elimination of the bass guitar from 1:49 to 2:24 is puzzling. The bass is replaced in the stereo field by a faux Hammond organ, and when it finally reappears, it does so awkwardly in the middle of a measure, as if Bob realized too late that the mute button was engaged.

“Morninglory Road” has a lot of upsides. The exemplary drum track and the powerful Keith Richards-style electric rhythm guitars create a great platform for success. That said, we urge Bob to address the issues with the bass track straight away. We can think of no advantage to panning the bass and strongly suggest placing it in the center of the stereo field along with the kick and snare. For the guitar balance, swapping the volumes of the lead and rhythm guitars would certainly be warranted. Finally, we feel that the decision to drop the bass out of the mix for more than half a minute in a song with this much drive is simply unwise. We encourage Bob to rethink that part of his arrangement and rejoin the bass with the drums.