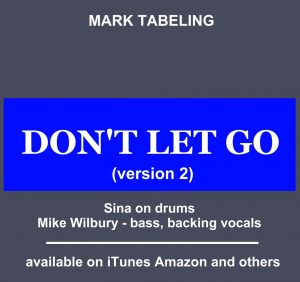 “Don’t Let Go” is a male vocal bluesy rock song. Mark wrote and recorded the song. The music bed was a collaboration between Mark, Mike Wilbury on bass and backing vocals, and Sina on drums.

Tracked on a modest standalone TASCAM 2488, Mark and friends have put together a swinging little blues rock track that works pretty well for the most part. Starting from the bottom up, the drums have a loose feel that fits the vibe of the song, although we would liked to have heard more definition from the kick drum. Through our monitors, it had a pillowy sound that failed to drive the track as well as it might have. We also felt that the drums were a tad too far back in the mix, leaving them out of balance with the more present bass guitar.

Mark did an excellent job recording both his lead and background vocals here. The plaintive lead vocal is über-present in the mix, but shows no sign of sibilance or overprocessing artifacts. Could it be that my constant admonishing is getting through, dear readers?

Moving on, both the clean electric and acoustic 12-string guitars were presented dry as a bone and present in the mix, mirroring the lead vocal in ambience. Sadly we did want to point out a timing issue near the 2:00 mark of the track that distracts from an otherwise effective breakdown section. Not sure what happened here, but it sounded awkward to our ears.

A few small areas to be worked on and “Don’t Let Go” will be on its way. We urge Mark to revisit his mix and rebalance his drums and bass guitar—their volume and presence disparities are holding things back, in our view. While he is reviewing the drums, a boost in the midrange to bring out more punch in the kick would be advisable.

As for the timing issues, a click track is not everyone’s cup of tea, but they can be invaluable in tracking and or repairing timing issues through editing.

The foundation is the key!