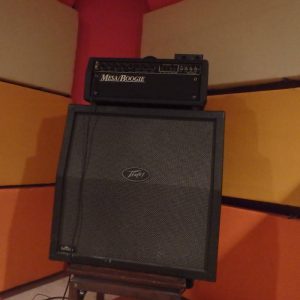 “Howl” is an instrumental track by the experimental rock duo Emma. Eric LeFrancois wrote the song and played the guitars. Alex Cloud played drums, produced, mixed, and mastered the track.

Eric and Alex have submitted a very cool and challenging track here. Without stereotyping things too much, the presence of only electric guitars and drums must take at least some inspiration from the Black Keys/White Stripes camp. This is further evidenced to our ears by Eric’s use of various levels of distortion garnered from three separate amps for his electric rhythm guitar. Combined with a smoother “rubbery” slide guitar part, and in concert with the shifting time signatures, the effect is both driving and elastic. We dig it!

Moving over to the drums, the guys have used a mountain of mics to capture Alex’s performance. All told, eleven mics—including dynamic, condenser, and ribbon—were employed. As for the results, we noticed an inconsistency of drum sounds that seemed to follow the changes in the song’s arrangement. At times the snare and toms were fat and present, at other times we heard a thinner distant sound.

In his production notes, Alex tells us that the duo used a series of room mics in their array, and our guess is that this explains the mechanics behind the various ambience changes. To our ears the entire track had an experimental nature which was evidenced by the combination of performance, tones, ambience, and time. Surely smooth consistency was not high on Emma’s list!

As the saying goes, “intent is 9/10 of the law.” One of the tricky parts of our job here at Readers’ Tracks is identifying what decisions were intended, what were accidents, what was knowledge and what was serendipity. Both Alex and Eric seem to posses the playing and recording chops to eliminate accident in regards to the shifting sonics, and suggesting that they homogenize their work flies in the face of intent.

Given that, we suggest that even more experimentation rule the day. Try fewer mics on the drums, along with different placement; can five do the job of eleven? How about the Glyn Johns treatment? Dig deeper, friends, and have fun!