This Thunderbolt 3 interface offers great fidelity, ease of use, and blazing speed

Designed from the ground up for speed, the PreSonus Quantum interface line launched in 2017 and now comprises three Quantum Thunderbolt Interfaces: Quantum (26X32), Quantum 2626 (26X26), and Quantum 4848 (32 line-level I/O on DB25). The Quantum 2626 is the first in its family to incorporate Thunderbolt 3 connectivity. The 2626 features 8 XMAX preamps and flexible connectivity.

I reviewed the PreSonus Studio 192 Mobile interface back in early 2017, a USB 3.0 device with excellent sound quality and a useful feature set. Problem was, it ended up being a bit cumbersome in practice due to an extensive digital mixer that posed challenging workflow issues for people who prefer to manage their signal paths in the DAW. PreSonus recognized this; subsequent Quantum interfaces did away with the internal mixer entirely. Now, Thunderbolt connectivity paired with optimized drivers provides unmatched speed, ease of use, and excellent fidelity.

Much like its Quantum siblings, the 2626 sports a sleek black and silver aesthetic in the form of a 1U interface. It supports up to 24-bit / 192 kHz recording and features eight combo jacks on the front panel with individual gain knobs, the main monitor control, and two 1/4” headphone outputs. There are two 48v phantom power switches available, which power channels 1-4 and 5-8. The first two combo jacks are mic/instrument inputs with high impedance when the 1/4” jack is in use, while channels 3-8 are mic/line jacks. In the absence of LED metering on the front panel, each gain knob has a corresponding signal LED that flashes between green, yellow, and red to indicate input level; input metering is also viewable in the control software.

PreSonus XMAX preamps are entirely analog, with Class A input buffers followed by dual-servo gain stages that provide low noise and a wide gain range (60dB with an EIN rating of > -131 dBu). I would describe the character as clean and open sounding, providing plenty of detail and air without noticeably shaping the input signal.

The back panel includes eight 1/4” TRS line outputs, a stereo 1/4” monitor output, 5-pin MIDI I/O, S/PDIF I/O, Optical ADAT I/O, BNC word clock, 1/4” preamp outputs and line returns for channels one and two, as well as the Thunderbolt 3 jack, power on/off switch, and power cord input. The direct preamp outs and returns are a welcome addition not found anywhere else in the line, which allow for connecting external processing units before hitting your DAW. The dual ADAT S/MUX I/O connections allow for 16 additional channels at base sample rates (8 each), which cuts in half for 88.2 or 96 kHz recording (4 each).

Surprisingly, there’s only one Thunderbolt 3 connector on the back panel—presumably a cost saving measure. In an expanded system, the 2626 will need to be either at the end of the Thunderbolt chain, or fed from a dedicated Thunderbolt port on your DAW computer. A Thunderbolt cable is not included with the unit, but a trip to the cable store was inevitable for me anyway because I needed to have a Thunderbolt 2 to Thunderbolt 3 adapter to run the 2626 on my home studio 2013 iMac. 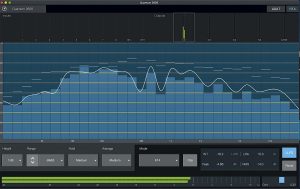 With the drivers installed and the firmware updated, I was pleasantly surprised by how streamlined the Universal Control (UC) software is. Upon launch, you’re prompted to select a sample rate and clock source. UC then provides metering for the eight analog and two S/PDIF inputs, and the option to digitally control any of the compatible ADAT optical inputs, such as a PreSonus DigiMax DP88.

In addition to the metering tab, there’s also a tab in the top right corner labeled ‘RTA’ for Real Time Analyzer. It allows you to select an input or output source and view a spectral analyzer, along with loudness and phase information. It offers several modes for Peak/RMS, K20, K14, K12, or EBU R128 loudness standards. It can toggle between LU or LUFS metering as well. When using a multi-monitor setup, I love having this analyzer parked on one of the screens for sessions, or even when playing back music for pleasure listening. The spectral and loudness information can be educational in itself even when doing general listening. 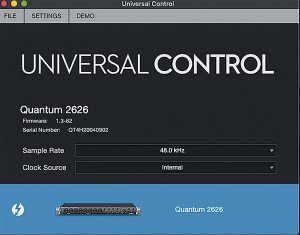 The lack of an integrated software mixer within UC is honestly a breath of fresh air; it amounts to less time toggling between pages and leads to a more streamlined experience overall. Drawbacks may be less routing flexibility and the fact that a DAW needs to be open to hear signal, but these problems are easy to work around. Many software mixers are a means to compensate for slower RTL (round trip latency) times to provide suitable monitoring options while tracking. While that’s a great feature when needed, the Quantum 2626 is so fast that latency is a non-issue, even when tracking through plugins. I didn’t expect my RTL times to be as fast as the driver benchmark times, due to the previously noted Thunderbolt adapter. Even so, I was getting RTL times of 1.6 ms with 32 to 64 sample buffer sizes, and down to 1.1 ms with a 16 sample buffer at 48 kHz. In my testing, the latency was entirely unnoticeable. Both the sound and speed of the Quantum 2626 are quite impressive, and the workflow is incredibly streamlined.

Without a doubt, the Quantum 2626 is the fastest interface I have ever used, and an absolute workhorse to record through. The XMAX preamps sound detailed and transparent, and the converters sound open and clean. My only issues are the single Thunderbolt port and lack of individual phantom power switches. The UC software with the analyzer information is a huge win for me, and overall operation is effortless. The Quantum 2626 comes with a generous offering of plugins, as well as an Artist version of Studio One. If you’re looking for a clean sound with the fastest RTL times available on the market, the Quantum 2626 is the answer you’ve been looking for.