June 27, 2019, Fort Wayne, IN –17,000 gear fanatics from across the country convened for Sweetwater Sound’s 18th Annual GearFest, held June 21-22 at Sweetwater’s headquarters in Fort Wayne, IN. The two-day event, which highlighted the newest musical instruments, technology and audio equipment from top manufacturers in addition to performances by special guest artists, also featured two full days of workshops held at Sweetwater Studios and the new Purdue Fort Wayne Sweetwater Music Center. The workshops provided attendees a nut-and-bolts approach to a wide variety of topics relating to making music and choosing the right equipment to practicing and performing, recording, mixing and engineering. The workshops also offered personalized discussions on how to pursue a successful career in the music business.

Everything You Need To Know 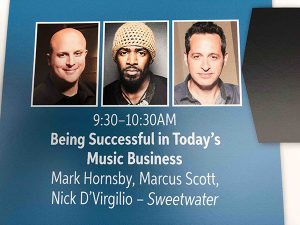 Alongside career experiences and personal anecdotes relayed by Sweetwater Studios’ first-call session drummer Nick D’Virgilio (Big Big Train, Tears for Fears, Cirque do Soleil), as well as Marcus Scott, vocalist for the legendary soul band Tower of Power, Hornsby demystified the seemingly magical combination of talent, networking savvy and persistence that it takes to become a working professional in the music business. GearFest attendees filled every seat available in the center, listening attentively to the hard-won wisdom of these industry professionals while gaining a deeper understanding of the music business as a whole. 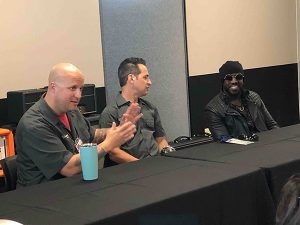 Following a discussion of the possibility for finding a more loyal fan base in niche markets, D’Virgilio described the grassroots approach of the progressive rock band he joined in 2007, Big Big Train, whose singer David Longdon and bass player Greg Spawton have found ways to engage fans through the internet, building a groundswell of support around their records, which recently launched the band’s latest album, Grand Tour, to No. 35 on the UK Official Albums Chart and No. 2 on the UK Official Rock Albums Chart.

“The takeaway from Nick’s story is: There is no silver bullet,” Hornsby said. “There is nothing any of us can tell you, or that anybody is going to tell you, that says, ‘If you do this, you’ll get paid tomorrow.’ The guys in Big Big Train were working on it for 10 years before Nick was in the band. They had a long-term vision. They weren’t expecting an immediate payout. And it is coming back to them now.”

Breaking through: the importance of drive and exposure

Marcus Scott also shared his experience of starting out in the music industry, emphasizing the importance of saying yes to every gig. While working in Memphis, Scott accepted a corporate gig he landed through a contact at a modeling agency in which he was asked to sing a cappella in the aisle of an airport terminal outside the storefront of an ice-cream shop during the store’s grand opening. While singing at the gig, Scott’s voice caught the attention of record producer David Porter, and — through a series of connections that spurred as a result of that gig in the aisle of an airport terminal — eventually led to his audition to become the current frontman for Tower of Power. 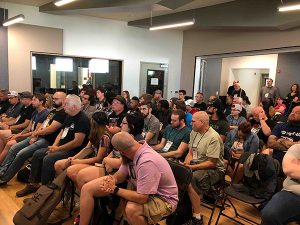 Hornsby followed up Scott’s story with some practical advice for networking that he learned while starting out as a recording engineer in Nashville, which eventually landed him a job at Seventeen Grand Recording, one of the first 5.1 high-definition studios in the U.S. “Get the other person’s contact info and find a way to help them,” Hornsby said. “I met the owner of Seventeen Grand Recording, at an Audio Engineering Society event, and the first phone call I ever made to him was when the AES was having a ‘Yard Sale.’ I called him up and asked, ‘What can I do to help? Do you need a volunteer?’ And he responded, ‘Yeah, that would be great!’ I gained credibility with him by calling him and offering him something. And that’s how you start to earn your way in the business.

“The music business really is just like any other business,” Hornsby concluded. “It’s about people skills, treating other people the way you want to be treated, and always giving 110 percent, whether its a free gig or a paying gig. We’ve really gone full circle, in that we’re back to grassroots in the music business. There is no magic button or magic phone call. It’s about going out there an rolling up your sleeves.”

GearFest attendees also had the opportunity to participate in studio workshops led by Hornsby on Friday in Sweewater’s Studio A Tracking Room, including “Recording Electric Guitar” with guitarist Tom Hemby, “Recording Vocals,” with Marcus Scott, as well as the “Recording Drums” workshop led by Nick D’Virgilio and Bobby Dellarocca. Hornsby also led Friday’s “Breaking Down the Mix: Examining a Mix from the Raw Track to the Finished Product” and “The 1-hour Mix: Getting the Job Done When Working on a Deadline” workshops held in Sweetwater’s Studio A Control Room.

In addition, “Deep Dive” workshops were held on Friday and Saturday focusing on Avid Pro Tools I S6 + MTRX and Avid Pro Tools Ultimate in the Studio A Control Room, led by Avid product specialists Jeff Komar and Greg “Stryke” Chin. Saturday also featured an “Ask Sylvia Studio Workshop” with producer/engineer Sylvia Massy (Tool, System of a Down) in the Studio A Control Room, plus more workshops on recording vocals with Hornsby and Kat Bowser and on recording drums with Hornsby and D’Virgilio in the Studio A Tracking Room.

Sweetwater Studios is a wholly owned subsidiary of Sweetwater Sound, Inc., the largest online music instrument retailer in the country. With three world-class studios designed by Russ Berger and access to a greater diversity of musical equipment and professional audio gear than any other recording studio in the world, Sweetwater Studios is able to accommodate just about any recording, mixing or mastering project, no matter how simple or complex. With renowned staff producer Mark Hornsby at the helm, who has worked on many Grammy-award winning albums, Sweetwater Studios also has an exceptional staff of producers, engineers, session musicians and studio technicians. For more information on Sweetwater Studios, please visit http://www.sweetwaterstudios.com.