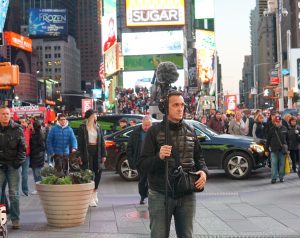 If you’ve watched a movie or a TV show in the past 15 years, you’ve heard the sound design work of Robert Dudzic many times over. His brooding textures and clangorous stingers have lent mood and excitement to trailers, Hollywood blockbusters including Spider-Man, Doctor Strange, and Maze Runner, numerous Netflix series, and the video game franchise Call of Duty, to name just a few. His three commercially released sound libraries — Trynity HDFX, Cinema Sound Tools, and RAID — can all be found in over 300 top post-production and radio facilities worldwide, and he also worked with developer Heavyocity on their wildly popular library Damage. His canvas of choice for, in his words, “bringing the audience into the sound in a way they might not have heard before” is Steinberg Cubase Pro 9.5. Recently he shared with us how some of its features enable his go-to techniques.

Starting in the field

“Whether it’s a bed for a trailer or a straightforward sound effect to go with a particular action onscreen, I begin with a lot of field recordings, which I then layer and process, and sometimes I combine them with synthesized sounds,” Dudzic explains. “I visit shipping docks, junkyards, and factories to record mechanical and industrial sounds — I recently went to a meatpacking plant to get organic, gory stuff. Much of the time I’m just letting my recorder run while I point the mic at different sources. When I get back to the studio, the first process I use in Cubase is called Detect Silence. This lets me break up very long tracks into distinct regions that correspond to the different sources, so I can then sort out and re-arrange them. You can set upper and lower thresholds for defining what a region is, and it varies, but usually works well when I define silence as anything below -60dB.” 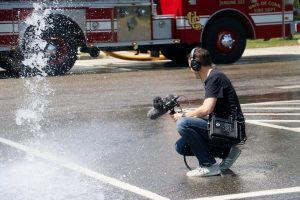 To combine diverse recordings into a single sound meant to accompany a particular event or mood, it is also necessary to place all the elements in the same sonic space. “I love busing a group of tracks to the REVerence convolution reverb for this,” says Dudzic. “It comes with Cubase, and it sounds so good that I don’t see the reason to buy an expensive third-party reverb. It’s very easy to load an impulse response that completely changes the character. I record a lot of my own responses, but I also reach for the cathedral-type presets a lot. Another trick I like is to roll off high frequencies right within REVerence, so that I have the big space of the convolution preset, but with a darker quality that often suits suspense pretty well.” 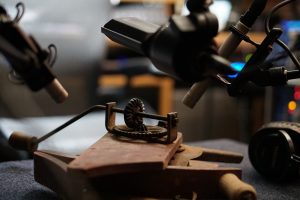 Dudzic prefers to originate recordings at a sample rate of at least 96kHz because “you retain more of the original character of the sound if you pitch-shift or time-stretch it,” he says. However, sometimes he needs to work with recordings made by different people on different occasions in the same project. “For this, I love Cubase as my main audio editor,” he notes. “I can open files of nearly any sample rate, from 44.1 to 96 or even 192kHz, and work with them all in the same arrange window. I can have them as elements in the same 5.1 surround mix, even, and the sample rate conversion in Cubase is just invisible.

“Another thing is the quality of the crossfades,” he continues. “Often, I’ll have an extended passage — say, a machine running or something — that I like and want to use in a larger context. But it has a problem in the middle. I can nip that out, hit one key to do a crossfade, and you can’t tell there was ever any interruption in the sound.” 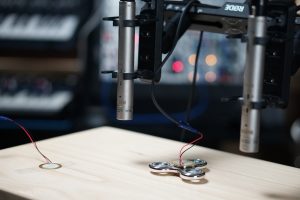 Dudzic’s favorite feature by far in Cubase is one he affectionately refers to as “Play-Doh,” more commonly known as the Sizing Applies Time Stretch tool. “This is in the tools palette,” he explains, “and if I select it as my cursor, just dragging on an edge of a region time-stretches (or time-compresses) it. This can go a long way towards getting a sinister sound, a futuristic robot voice, or whatever I need.”

In conjunction with this feature, Dudzic regularly makes use of the advanced quantization options in Cubase, in order to conform source recordings that might have natural rhythmic content to his projects. “I just did some great recordings at a steam engine museum,” he explains. “Now, some of these engines had their own beat to them. One even had a strange beat — it sounded like it was in 7/8 time! Based on the time and tempo I need, I can define hitpoints in a track I already have in the same edit group. Then, I can just hit Quantize and all those new tracks are matched to those hitpoints. Again, this is really important to keeping the original character and rhythmic quality but making the end result feel like one unified sound effect.” 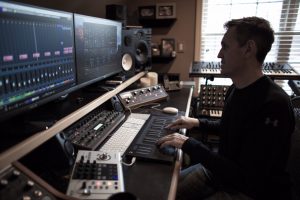 When he’s not hand-farming unique sounds from the external world, Dudzic reaches for the software instruments bundled with Cubase. “Since I use many VST instruments, I’ll always stick with Cubase as opposed to another DAW, because Steinberg invented VST and they’ll always be ahead of the game in virtual instrument implementation,” he says. “These days I use the HALion sampler a lot because it’s just so easy to program and to import your own samples. I especially like the Dark Planet expansion for it. I can remember the first soft synth that really blew me away was by Steinberg. It was called Xphraze, and they don’t make it anymore, but you could do all kinds of riffs and patterns with it.”

Some time-tested Steinberg hardware is also a part of Dudzic’s studio workflow. “I have a couple of the MR816 series audio interfaces, which I think were way underrated in terms of their sound quality,” he points out. “Then, there’s my CC121 controller — the one that has the jog wheel and single motorized fader — which I’ve had almost ten years. I still use it every day. It controls every aspect of Cubase I need it to, and it’s built like a tank!” 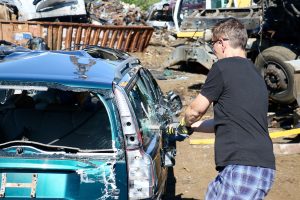 Asked what advice he has for anyone who aspires to a cinematic sound design or composition career like his, Dudzic offers, “I compare sound design to cooking. It’s tempting to want all the spices and sauces and gadgets you see in the gourmet shop. But you can’t use every spice in every dish, or else they’ll all taste the same. So, I say, before you feel like you need a lot of expensive third-party plug-ins or high-end hardware compressors or whatever it is, learn your recording software and all the tools that came with it. Figure out what each thing does separately, then try putting a couple together. Even something as simple as the channel strip presets in Cubase can dramatically change the character of a sound if you experiment with them. 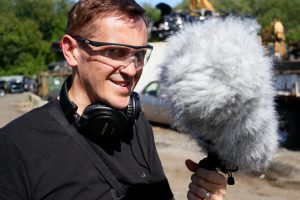 The latest version of Cubase Pro comes loaded with so much stuff that if you know what you’re doing, even a little, you will blow people away with your results without needing a third-party anything. If you don’t know what you’re doing, you’ll be able to learn, because their support and user community is full of great tutorials.”