“On hearing this library over the speakers in Studio One’s control room, it sounded — and felt — like Joby [Burgess] was out in the room playing; it’s extraordinary.”

LONDON, UK: Spitfire Audio is proud to announce availability of ABBEY ROAD ORCHESTRA: LOW PERCUSSION — laying the foundations for the sound-specialising British music technology company’s brand-new flagship Professional Composer Series as the most detailed sample library that it has ever created, crafted for music editors, producers, professional composers, and sound designers alike as the culmination of over 20 years of sample experience and innovation to offer incredible precision across an encyclopaedic selection of orchestral and cinematic percussion performed by British world-class percussionist Joby Burgess (Black Panther, Mission: Impossible) in Abbey Road Studios’ world-famous Studio One, the unmistakable acoustic of which was also beautifully captured by GRAMMY® Award-winning engineer extraordinaire Simon Rhodes (Skyfall, Avatar), effectively resulting in users having instant access to their very own world-class percussionist with a whole new level of expression at their fingertips, helpfully housed as a truly thunderous orchestral and esoteric drum collection in an award-winning, easy-to-use, intuitive and inspiring (AU-, AAX-, NKS-, VST2-, and VST3-compatible) plug-in designed for composers by composers that loads directly into all major DAWs (Digital Audio Workstations) without the need for any additional software — as of November 10…

Company co-founder and award-winning composer Paul Thomson takes pride in introducing the most detailed sample library that Spitfire Audio has ever created: “ABBEY ROAD ORCHESTRA is our new series of highly-detailed orchestral samples, captured in the legendary space of Abbey Road [Studios’] Studio One. The series opens with …LOW PERCUSSION, a collection of unique and rare instruments, captured in extreme detail, and with a really expressive feel. This is the most detail we have ever created in any of our projects. The goal for ABBEY ROAD ORCHESTRA is to take orchestral sampling to new heights, with a highly-focused, detailed, and no-compromise approach to capturing orchestral samples. This is going to be a long-term project, so we look forward to sharing more as the project progresses, but, for now, let’s dive straight in to …LOW PERCUSSION.”

Put it this way: with over 166,000 samples representing 65 hours of recording time in Abbey Road Studios’ world-famous Studio One to its notable name, ABBEY ROAD ORCHESTRA: LOW PERCUSSION certainly digs deep when laying the foundations for Spitfire Audio’s brand-new flagship Professional Composer Series. Indeed, it lays the groundwork for any user’s compositions with unrivalled realism as a collection of truly thunderous orchestral and esoteric drums that are beautifully captured in the legendary acoustic of Abbey Road Studios’ world-famous Studio One, the world’s largest purpose-built recording studio. Surely Studio One needs no introduction, having hosted celebrated classical recordings ranging from English composer Sir Edward Elgar to Russian composer, pianist, and conductor Sergei Prokofiev, as well as iconic film scores spanning 1981’s Raiders of the Lost Ark (John Williams), 1983’s Star Wars: Return of the Jedi (John Williams), and 2001-2003’s The Lord of the Rings trilogy (Howard Shore) to more recent releases, including 2018’s Black Panther (Ludwig Göransson) and 2019’s Avengers: Endgame (Alan Silvestri). It is also home to one of the world’s greatest in-house collections of vintage and modern microphones while a 72-channel Neve 88 RS large-format mixing console with a unique and comprehensive surround monitor section acts as the centrepiece of its control room. It is little wonder, then, that Studio One is the perfect setting for Spitfire Audio’s meticulously-planned recording sessions to deliver the world’s most detailed orchestral samples, starting with ABBEY ROAD ORCHESTRA: LOW PERCUSSION.

Duly distinguished by its extremely responsive and highly-tactile nature, ABBEY ROAD ORCHESTRA: LOW PERCUSSION explores the timbral and textural range of 20 drums from across the orchestral repertoire and beyond performed by British world-class percussionist Joby Burgess — hits, tools, swirls, and sweeps. Such virtuosity was captured in incredible detail by GRAMMY® Award-winning engineer extraordinaire Simon Rhodes, who — having joined what was then EMI Recording Studios in 1987 — is now Senior Engineer at Abbey Road Studios, having cultivated a longstanding association with various composers, including the late James Horner, with whom he worked for 18 years on over 50 projects, including 2009’s Avatar as one of the highest-grossing films of all time.

That Spitfire Audio also brings next-level control to ABBEY ROAD ORCHESTRA: LOW PERCUSSION — allowing anyone to shape those extensive percussion options on offer to work with their compositions — is perfectly in keeping with the highly-detailed orchestral sampling concept driving its brand-new flagship Professional Composer Series, starting with 16 signal options, including Mix 1, a full-sounding room mix by Simon Rhodes (formed from Tree 1, Section Overhead, and Outriggers 1 with a curated blend of spots), and Mix 2, a tighter mix by Simon Rhodes (formed from Tree 2, Mids, and Outriggers 2 with a curated blend of spots). Saying that, the new discrete right-/left-hand mapping feature and ‘Soft Takeover’ option for dynamics all contribute greatly to its dynamic feel. “Spitfire Audio are, undoubtedly, the best team in the world to deliver something truly groundbreaking,” gushes Abbey Road Studios Head of Audio Products Mirek Stiles, before ending on an equally high note: “The bar has been raised exceedingly high, and this is only the beginning for the ABBEY ROAD ORCHESTRA series; it feels we are all in for a remarkable journey.” 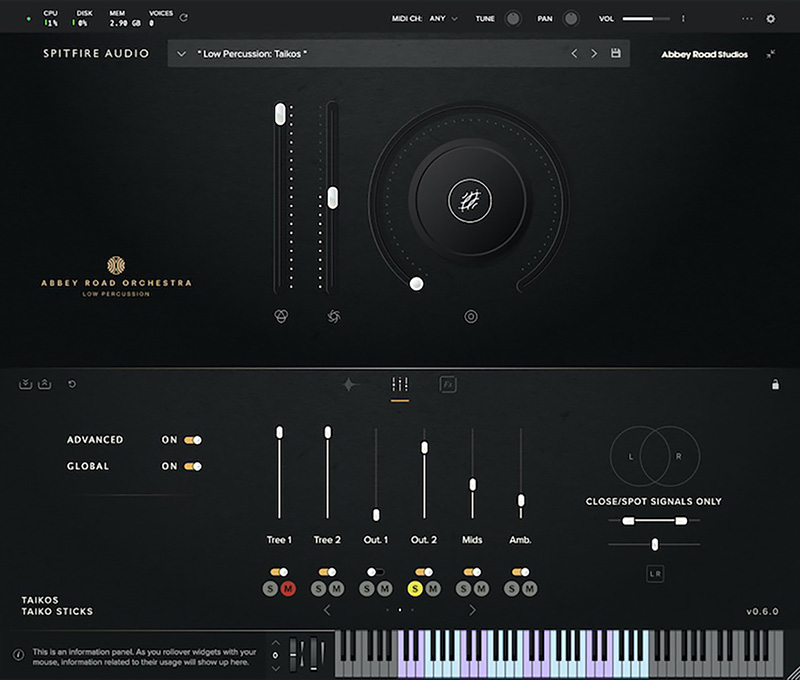