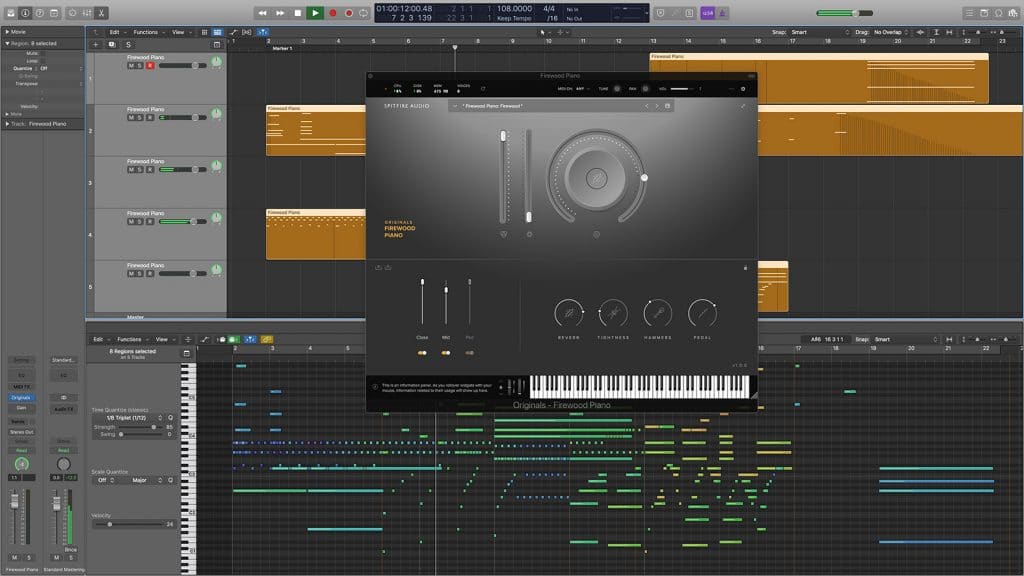 LONDON, UK: Spitfire Audio is proud to announce availability of FIREWOOD PIANO — a stunning-sounding upright piano bursting with character (due to unique resonances created by its cracked bridge), becoming the latest library in the sound-specialising British music technology company’s ongoing ORIGINALS series of instant library tools with the same outstanding recording quality as the ‘full-blown’ blue-chip libraries with which it has built its reputation, simplified and presented in its free, easy-to-use plug-in, produced this time from performances by Jeremiah Fraites of The Lumineers, an American folk rock band based in Denver, Colorado, which is also where the latest library was expertly recorded (at Colorado Sound Studios) — as of October 29…

Christening the intriguingly — and, as it happens, aptly — named FIREWOOD PIANO is a noteworthy footnote in itself. So starting, briefly, back at the beginning, the piano that gave rise to that notable name is a very small upright spinet design — distinguished by shorter keys with rods that connect each key to the rest of the action (as opposed to console pianos with regular-style upright action where the key is much longer and connects directly to the action) — albeit one with a cracked bridge, bursting with character. Built back in 1955 by the Krakeuer Brothers (NYC), the instrument in question is not only favoured by Jeremiah Fraites of American folk rockers The Lumineers for its distinctive tone, but it also holds personal value for him since it has been in his family for years. Yet the future FIREWOOD PIANO name came from something that piano tuner Michael Jackson once said since the faithful Fraites’ spinet was so obviously old and battered: “All this is good for is firewood!

Fortunately for the piano-playing world at large, Fraites’ favoured piano was not chopped up for firewood, but lived on to be played another day and, ultimately, make musical firewood — FIREWOOD PIANO, the seventh release in Spitfire Audio’s ongoing ORIGINALS series of instant library tools. The delicate and emotional sound of FIREWOOD PIANO was captured at Colorado Sound Studios — providing top-quality recording services for local artists, national artists, and businesses for over 42 years as a full-service, professional facility for music production, mastering, composing, arranging, MIDI, video production, and access to the finest professional talent — with Jeremiah Fraites himself at the keys, before being transformed to become an easy-to-use plug-in perfectly suited to a wide range of contemporary production and film scoring settings, thanks in no small part to its five — Firewood, Firewood + Pad, Felt, Felt + Pad, and Warps — presets ranging from the ‘straight’ sound through to felted alternatives, plus pads and warped sounds made from the piano’s resonances.

Digging deeper, though not too deep — as is the nature of the sound-specialising British music technology company’s ongoing ORIGINALS series of instant library tools as essential cinematic ingredients, there are also three sound-altering signal paths available to choose from: Close, a nice-sounding upfront pair of close mics; Mid, created from recordings with the middle pedal down, which exposes the unique nature of the instrument in question’s broken bridge; and Pad. Plainly speaking REVERB, TIGHTNESS, HAMMERS, and PEDAL parameters provide further control and effects. All are self explanatory and allow the vintage character and timeless sound of performer Jeremiah Fraites’ favoured piano to shine forth for all to play as they see fit to have it sound — simplified and presented in Spitfire Audio’s free, easy- to-use plug-in as FIREWOOD PIANO.

Perfectly positioned as another next step up from Spitfire Audio’s free LABS libraries, or even a wonderful way of side-stepping across from BBC SYMPHONY ORCHESTRA DISCOVER — a universal starting point to explore and create with 35 instruments impeccably performed by the world- famous BBC Symphony Orchestra, brought to life inside another beautifully designed, easy-to-use plug-in, compatible with any major music creation software from Garageband to Pro Tools, and affordably priced to boot — and onwards and upwards into the far-reaching realms of those ‘full-blown’ blue-chip libraries with which Spitfire Audio has built its reputation, the even more affordably-priced FIREWOOD PIANO should certainly appeal to the sound-specialising British music technology company’s core audience and a potential new audience alike.

As such, playing with FIREWOOD PIANO should certainly fire up the creative compositional minds of anyone interested in contemporary production and film scoring. Fraites’ favoured piano was good for a whole lot more than firewood, after all, as The Lumineers’ piano-playing principal composer knows only too well!

Witness the delicate and emotional sound of FIREWOOD PIANO while watching its trailer video here: https://youtu.be/3s9i30OaCGw