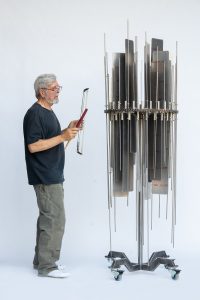 “Chas’ instruments have been a crucial part of all of my film scores, and although I’m a little sad that I will no longer have him all to myself, I am thrilled that he has finally succumbed to years of urging on my part and has at long last collaborated with Spitfire Audio.”

LONDON, UK: created in close collaboration with hotshot Hollywood instrument-builder Chas Smith, famed for transforming disused metal into Hollywood’s most menacing, most mysterious instruments for forty years (yet still sought after by blockbuster film composers needing to score the awe-inspiring, the mystical, the mechanical, and the alien), sound- specialising British music technology company Spitfire Audio is proud to announce availability of MERCURY — harnessing his unearthly sounds for all by sampling 14 of the hotshot Hollywood instrument-builder’s most celebrated acoustic instruments, then fusing, warping, and reinventing them in Solar, Spitfire Audio’s new eDNA-powered synthesiser, to deliver 600+ organic and synthesised textures, tones, and pads perfect for tweaking, twisting, and recombining to unleash the sinister, unshackle the industrial, and unveil the impossible worlds orbiting just beyond reach — as of August 25… 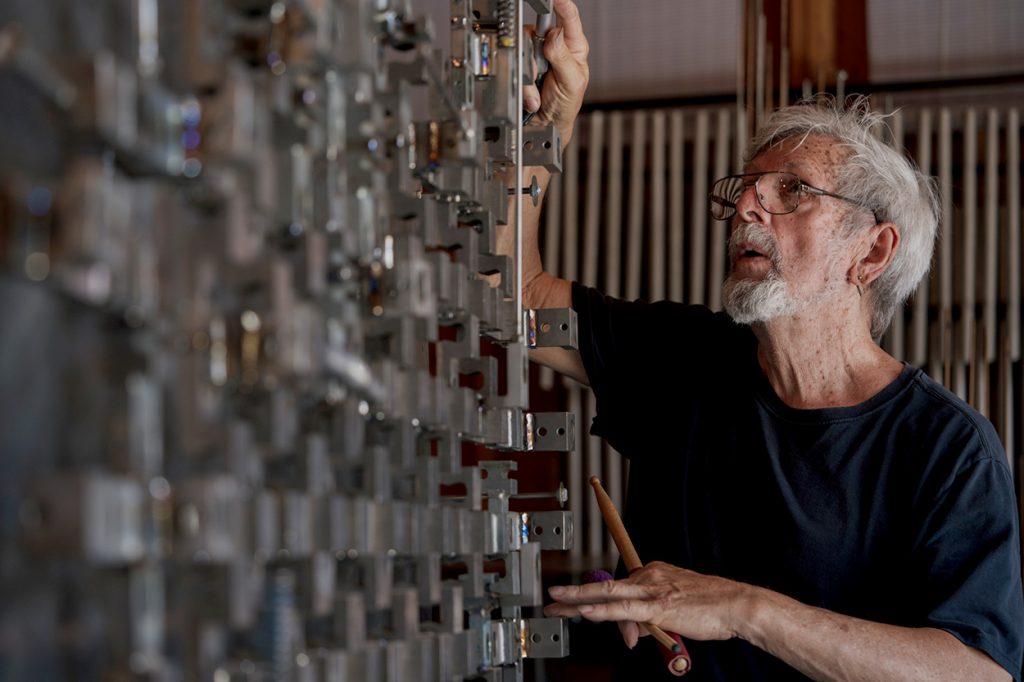 Hotshot Hollywood film composers needing to score the awe-inspiring, the mystical, the mechanical, and the alien turn to Los Angeles-based composer, performer, and instrument-builder Chas Smith. For forty years, he has transformed disused metal into Hollywood’s most menacing, most mysterious instruments. Indeed, his creations painted the unearthly soundscapes of the multi-Academy Award- and GRAMMY® Award-winning Hans Zimmer’s Dune and Interstellar, sang heroic anthems for that prolific composer’s Man of Steel and the multi-Academy Award-nominated and GRAMMY® Award-winning James Newton Howard’s The Hunger Games, as well as the textured, tortuous terrors throughout the Saw film franchise scored by GRAMMY® Award-nominated composer, keyboardist, record producer, and remixer Charlie Clouser, formerly of American industrial rockers Nine Inch Nails.

Now, with MERCURY, Spitfire Audio actively brings Chas Smith’s incomparable, one-of-a-kind sound to one and all. As Spitfire Audio in-house composer Dan Keen sees it, “A conversation that I often have with composers is, ‘What can you do to stand out from the crowd to make you sound a little bit different?’ And once you’ve gone round the houses, you really can only arrive at two conclusions: either you take the sounds that you already have, and you put them through effects plug-ins or pedals, or you try and make something that sounds like nothing anyone has ever heard before. And for the likes of Hans Zimmer or Charlie Clouser — these trailblazers, whose sonic fingerprint is everywhere in Hollywood, they always go down the bespoke route. And they always go to Chas Smith, who, for the last forty years, has been bowing, welding, and hitting metallic structures that create otherworldly soundscapes that really don’t sound like anything you’ve ever heard on earth. We’re really proud to put his most celebrated instruments in your hands in the shape of MERCURY — 14 instruments, culminating in over 300 presets and 600 textures, tones, and pads, housed in our new eDNA-powered synthesiser, Solar. There’s a really eclectic mix of sounds in this library — from drones to atmospheres, longs, shorts, warps, distorted elements.”

End game? Getting those 14 unique, handmade instruments into MERCURY meant sampling the celebrated creations concerned: Bertolia — inspired by Italian-born American artist, sound art sculptor, and modern furniture designer Harry Bertolia, Inconel rods with aluminium resonators on a turbine blade are all tuned to 14 tone scales; Dado — machined steel plates that can spin over pickups; Towers — nine titanium rods, tuned to be ‘friendly’ with each other, with titanium plates on each end; Lockhead — titanium parts welded into a structure and a titanium sheet acting as a resonator; Mantis — titanium parts welded into a structure that can rotate; Copper Box — rods, plates, and a folded horn resonator, whereby each rod is 36 inches long and the helix of rods continues under the resonator plates; Paraboloid — a titanium sheet with added rods; The Pez Eater — tuned steel rods and pickups; Sceptre — saw blades, plates, and things that can rotate; AD — springs welded to saw blades over pickups; Bass Steel Guitar — machined from aluminium; and Que Lastas — stainless steel sheet with rods and bass piano strings. It is worth noting that the latter was originally commissioned by multi-award-winning American composer, conductor and pianist extraordinaire John Williams — widely held as being responsible for some of the greatest film scores of all time — for the inaugural season of the Walt Disney Concert Hall (but later deemed too dark and menacing), before becoming the quintessential sound of the Saw film franchise, composer Charlie Clouser having been moved to tears upon first hearing it.

In order to build unique sonic worlds with which to score something awe-inspiring, it is necessary to discover sounds and instruments that are not easily replicated — exactly why MERCURY takes those exceptional acoustic sculptures handcrafted by Chas Smith and allows its users to experiment and go beyond the usual and familiar. For this reason, MERCURY was built by Spitfire Audio with the idea that truly unique instruments should sound organic — not artificial. A bespoke collection of the most amazing, transcendent, and haunting musical textures and tones possible, in other words. Which is exactly why Chas Smith succeeded in creating artistic, evocative, metallic sculptures that also happen to be the secret ingredient in the iconic scores of Dune, Dunkirk, and Interstellar. Indeed, Hans Zimmer himself is on record as saying, “No single human being would be crazy enough to design an instrument as illogical as this.” 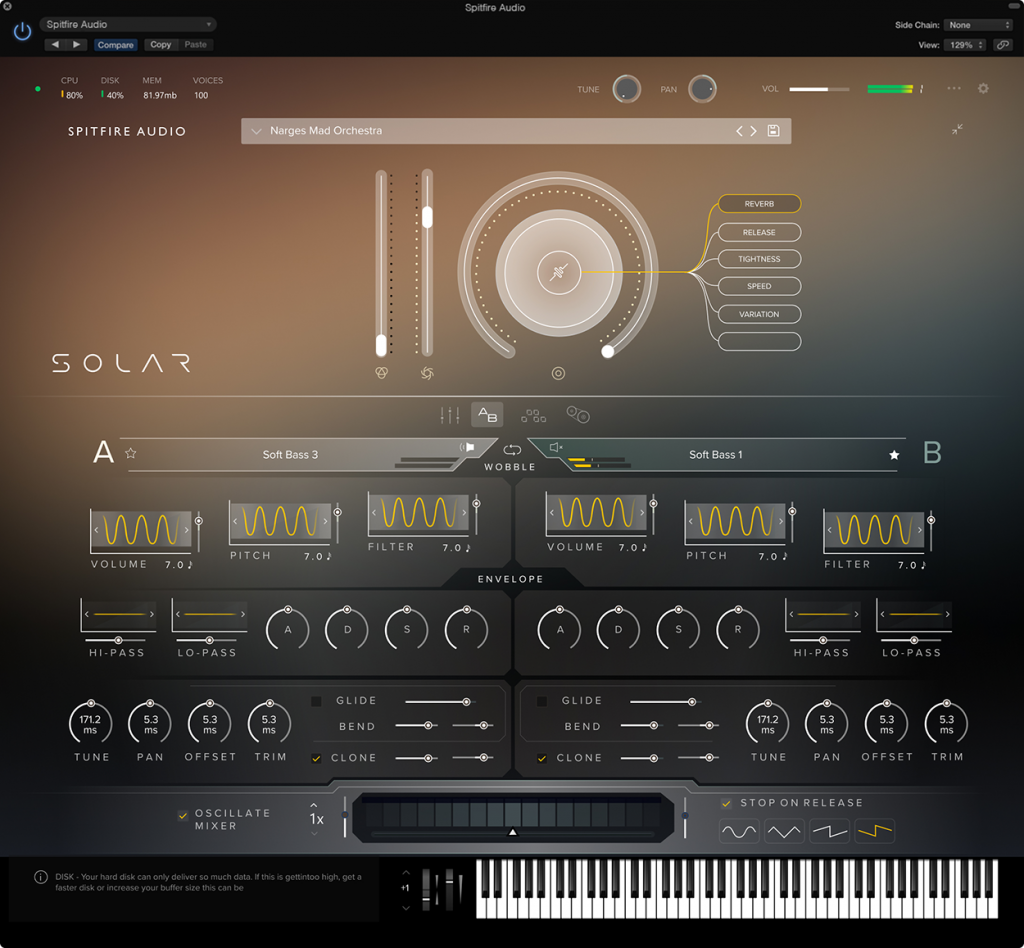 Therein lies the magic behind these instruments — insofar as their roars and whispers evoke emotions of the strongest order amongst the greatest film composers in the world. While Chas Smith himself holds the key to the cosmic sounds of cinematic metal made possible by the handcrafted souls of these irreplaceable structures, Spitfire Audio’s latest library likewise harnesses those unearthly sounds by creatively combining two dynamic forces: MERCURY and Solar — one, a collection of pure, organic sounds; the other, a tool for reinventing them. The most up-to-date iteration of Spitfire Audio’s proprietary eDNA technology, Solar is the host to MERCURY’s organic, ethereal samples and the eDNA’s extensive warps — CORE (raw sounds as they were created), AWASH (layers of reverbs diffusing the sound to create lush atmospheres), CASCADE (chains of delays creating evolving textures with just a hint of rhythm), DESTRUCT (Eurorack modular synth modules and outboard effects saturation and destruction), MOLECULE (granular effects completely rearranging and recombining the sound), and WEIGHT (sound design techniques and effects series augmenting the low-end of the sounds) — and preset library.

“It is the kind of library that you can use on its own, and it writes cues really well for that kind of otherworldly sound, but also — as a composition professor once told me — it is quite important sometimes to create the canvas before you paint on it, and this is a really good library for laying down the groundwork and setting yourself up for what is ultimately going to be a much easier scoring experience.” So says Dan Keen by way of a fitting conclusion for a library like no other, one whose groundwork was laid by an individual who was not always a hotshot Hollywood instrument-builder, but rather started out as a union welder and fabricator, metalworking for the film industry, and also received an Academy Award for the structural engineering of the BulldogTM Motion Control camera crane — proof positive, likewise, that the only limitation is one’s imagination!

The company has built its new facility to showcase the suitability of the PMC brand for this exciting new music mixing format.

Biggleswade, UK: August 24th 2022: MGM Audio AG, the Swiss distributor for PMC’s entire range of loudspeakers, has installed a new Dolby Atmos Music demo facility at its premises in Glattbrugg, near Zurich airport, to showcase the suitability of PMC monitors for this burgeoning immersive audio format.

The new 7.1.4 demo room is equipped with monitors from PMC’s recently launched compact near and midfield series, which are redefining the listening experience for audio professionals working in stereo and large-scale immersive formats. The system includes three PMC8-2 monitors for the front LCR, two PMC8-2 SUBs for LFE and eight PMC6 for surrounds and ceiling. Other equipment includes Avid ProTools Studio running on an Apple Studio, an SSL A16.D16 Dante Converter and an SPL MC16 Analogue Monitoring Controller.