Spitfire Audio announces availability of ABBEY ROAD ONE: GRAND BRASS as next installment in creative partnership with Abbey Road Studios 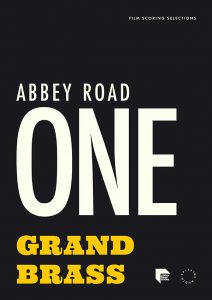 LONDON, UK: having successfully cemented a creative partnership with world-famous Abbey Road Studios late last year as ABBEY ROAD ONE: ORCHESTRAL FOUNDATIONS inaugurated its ABBEY ROAD ONE: FILM SCORING SELECTIONS series showcasing the foundational film scoring sound of Studio One by carefully capturing a 90-piece symphonic orchestra inside the world’s largest purpose-built recording studio, Spitfire Audio is proud to announce availability of ABBEY ROAD ONE: GRAND BRASS — following hot on the heels of three attractively-priced ABBEY ROAD ONE: SPARKLING WOODWINDS, ABBEY ROAD ONE: LEGENDARY LOW STRINGS, and ABBEY ROAD ONE: WONDROUS FLUTES followup releases captured in that same studio and available to purchase as standalone sample libraries or as adept additions to ABBEY ROAD ONE: ORCHESTRAL FOUNDATIONS itself, this time offering exceptional performances of horns and tuba, as well as the idiomatic pairing of horns and cellos, beautifully orchestrated to allow for the creation of moving, stately, and momentous melodic lines as a diverse collection of techniques to include shorts, powerful longs, and purposeful swells alongside the sound-specialising British music technology company’s newly-developed, easy-to-use legatos patches perfect for fashioning heroic drama and distinctive themes — as of August 31…

ABBEY ROAD ONE: GRAND BRASS elegantly captures expert performances of four horns, supported by a deeply resonant tuba, sounding an octave below. But better still, ultimate control of articulations such as LEGATO, LONG, STACCATO, and TENUTO, as well as SWELLS SHORT, SWELLS MEDIUM, and SWELLS LONG are all present and accessible with the greatest of ease via Spitfire Audio’s dedicated plug-in. Put it this way: with these essential techniques, ABBEY ROAD ONE: GRAND BRASS is designed to provide its users with not only the sharp, punchy sounds that they would expect from a sample library letting loose with brass, but also lyrical performances for creating unforgettable melodic lines since Spitfire Audio’s carefully crafted four-horn section is combined with an enchanting ensemble of 10 cellos, creatively presented in both SOARING LONG and SOARING LEGATO patches for exclusive control.

Composers ranging from English composer, arranger, and teacher Gustav Holst — best known for his orchestral suite The Planets — to American composer, conductor, pianist, and trombonist John Williams — responsible for some of the most popular, recognisable, and critically acclaimed film scores in cinematic history — have used the idiomatic pairing of brass and strings for its characteristic mellow and rich timbre that elegantly represent those instruments’ ‘cantabile’ or ‘singing’ ranges. Think the latter’s musically memorable opening to Star Wars, for example. By being performed in the unmistakable acoustics of Abbey Road Studios’ Studio One, ABBEY ROAD ONE: GRAND BRASS’ perfect pairing adds yet more depth to Spitfire Audio’s ever-expanding ABBEY ROAD ONE… range.

Realism abounds as any ABBEY ROAD ONE: GRAND BRASS user effectively enters the room that most composers can only dream of — namely, Abbey Road Studios’ Studio One. Of course, Studio One is considered to be one of the finest acoustical spaces in the world, with its history having an indelible connection with the scores recorded there, embedding emotion, mood, and magic into many of the most renowned films ever made. Musical matches made in heaven, classics such as Star Wars, Lord of the Rings, Harry Potter, and Avengers: Endgame were all recorded in Studio One. Thanks to its rich tonality and famed reverb, Studio One’s sound is widescreen and epic — truly the iconic sound of cinema.

Attractively, ABBEY ROAD ONE: GRAND BRASS — and, indeed, all of its associated ABBEY ROAD ONE: FILM SCORING SELECTIONS siblings — puts the same first-call musicians that play on globally successful movies at the fingertips of its users, all recorded by multi-GRAMMY® Award-winning engineer Simon Rhodes (Avatar, Hugo, Harry Potter) and featuring Abbey Road Studios’ coveted collection of microphones and outboard gear.

Growing the 90-piece symphonic orchestra-based ABBEY ROAD ONE: ORCHESTRAL FOUNDATIONS fantastically representing Spitfire Audio partnering with Abbey Road Studios for the very first time, ABBEY ROAD ONE: GRAND BRASS is also a fully-fledged, standalone sample library in its own right, recorded in the same way that its users’ favourite film composers would: with the unmistakable acoustics of Abbey Road Studios’ Studio One, exceptional players, award-winning sound engineers, and priceless microphones, albeit all allowing them to quickly and easily create film scores, saving time layering and trying to mix, thanks to stunning options of microphone positioning and mixes that are consistent across all of Spitfire Audio’s ABBEY ROAD ONE: FILM SCORING SELECTIONS series — and all without leaving their computer comfort zone.

Zeitgeist-tapping to today’s technology-comfortable composers, ABBEY ROAD ONE: GRAND BRASS can clearly elevate existing symphonic toolkits or be paired with ABBEY ROAD ONE: ORCHESTRAL FOUNDATIONS to create soaring, heroic themes — just ask Spitfire Audio co-founder Paul Thomson, himself no stranger to the wonderful world of film scoring as an English composer for film, television, and video games, and as a music technologist to boot, one who has happily signed off on it from all angles. “I’m looking forward to seeing how people use this — not only on its own in their compositions, but also in the context of working with other brass libraries,” he says, before adding: “Actually, I would use this in combination with our other brass libraries, but this — as with all our other …SELECTIONS… — fills an incredibly useful slot since it’s specifically recorded — and the specific techniques we used to capture it are designed — to get that authentic sound, which is sometimes quite hard to get.”

The ABBEY ROAD ONE: FILM SCORING SELECTIONS series-inaugurating ABBEY ROAD ONE: ORCHESTRAL FOUNDATIONS is itself available as an AAX-, AU-, VST2-, and VST3-compatible, NKS-ready plug-in that loads directly into a DAW for an MSRP of £399.00 GBP (inc. VAT)/ $449.00 USD/€449.00 EUR (inc. VAT) — from here: https://www.spitfireaudio.com/shop/a-z/abbey-road-one-orchestral-foundations/