Two contemporary microphone brands with very different approaches to microphone design are excited to announce their collaboration. Soyuz Microphones is known for creating high-end modern classics — microphones designed and hand manufactured in the same fashion as the iconic vintage transducers of yesteryear. Townsend Labs, on the other hand, are the inventors of multi-dimensional mic modeling, and the Sphere Microphone Modeling System relies on cutting edge digital technology and modern microphone manufacturing methods. The first outcome of the concerted effort is the forthcoming inclusion of an officially commissioned Soyuz 017 TUBE model in the Sphere plug-in, the software component of Townsend Labs Sphere L22 Microphone Modeling System. Release date to be announced. 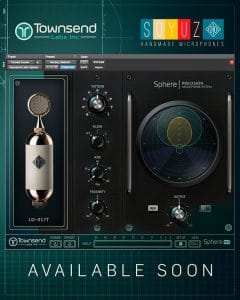 “I’ve been paying close attention to the hand-crafted Soyuz microphones for years. The design first caught my attention, but their reputation and sound made the combination worth capturing and sharing.” States Townsend Labs Co-Founder, Erik Papp. “The timing and chance to collude with the Russians made it hard to pass up.”
It is with great pride and excitement Soyuz Microphones and Townsend Labs announce their new collaboration. The first outcome of the joint effort is an officially endorsed model of the Soyuz 017 TUBE microphone, which will be added to the already impressive collection of high-end microphones in Townsend Labs’ Sphere plug-in.
The Soyuz 017 TUBE model will be included in a forthcoming update to the Sphere plug-in, which will be free to existing Sphere owners. The release date yet to be announced.