October 2022 – RME continues to be a valuable asset for audio professionals and HiFi audiophile enthusiasts. Their valiant efforts in the industry pick up with the release of the ADI-2/4 Pro SE, an incredible addition to the already intense lineup of ADI-2 Series products over the past several years.

RME’s efforts to provide high-quality, reliable, professional-level equipment are apparent in the ADI-2/4 Pro SE. From converters to interfaces, RME has raised the stakes by giving both professionals and consumers alike the next stage of tools they’ve been waiting for.

After years of continued development of the ADI-2 Pro, RME unveils the next addition to the countless award-winning series. The ADI-2/4 Pro SE is a 2-channel analog input to digital and 4- channel digital to analog output professional studio quality converter. This latest masterpiece comes with a newly developed circuit board, improved specifications, and faster DSP for a uniquely transparent sound signature. The list continues with the extreme power headphone amplifiers, including IEM power setting, super low noise balanced connection, trigger out function for powering on/off external devices, and finally, an RIAA mode for directly digitizing vinyl discs in the highest quality.

The ADI-2/4 Pro SE includes two servo-balanced analog inputs on combo XLR and TRS jacks, two separate balanced and unbalanced outputs on XLR and TRS, and two stereo extreme power headphone outputs on the front for the balanced operation of all headphones, including IEMs via Pentaconn connector. Also available are optical SPDIF I/O, which also understands ADAT, coaxial SPDIF (RCA), and AES I/O (XLR) via an included breakout cable. This universal set of I/O options offers superior quality and flexible connectivity to those who take a no-compromise approach to audio.

The USB 2.0 port is fully class compliant, a standard natively supported by operating systems like iOS, macOS, Linux, and Windows 10, as well as for firmware updates. The ADI-2/4 Pro SE can be easily powered by a battery, opening up mobile applications and galvanically isolated use cases, including an external switched power supply with a lockable connector.

As a computer interface, the ADI-2/4 Pro SE offers a stereo and a multichannel mode with out-of-the-box macOS capabilities. Under Windows, the ADI-2/4 Pro uses RME’s MADIface series driver for full WDM and ASIO compatibility. 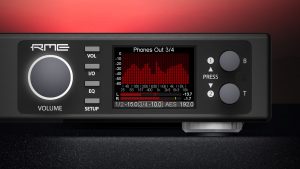 A high-resolution IPS panel for the graphical operation surface eases operation even more and displays additional functions provided by the DSP. Those include peak level meters, a 30-band analyzer in DIGICheck biquad filter technology, and a state overview screen listing the current states of SPDIF, AES, USB, and clock. The combination of all these incredible features gives this model that next leg up.

RME strives to put the consumer above all by providing them with equipment that is reliable, high-quality, and affordable. Audio professionals crave vulnerability within the comfort of their craft and RME is a company that is committed to giving them the resources to be so. The ADI-2/4 Pro SE will open creative doors and engulf its listeners in deeply connected sound as RME continues to innovate the industry we know today.