Atlanta, GA, November 28, 2022 — A modern day pioneer of electronic music, Richard Devine is something of a renaissance man when it comes to synth-based composition and performance. As an artist, he has produced six of his own albums and headlined international tours; as a developer or sound designer he has worked with major brands such as Apple, Nike, Touchstone Pictures and countless others. Devine is constantly evaluating new tools for his both live performance and studio, and recently began working with Misha: Eventide’s inspiring new interval-based instrument and sequencer for Eurorack.

While Devine is always one to embrace market innovation — particularly in the world of Eurorack — he says it is increasingly uncommon for a single module to offer a completely new set of performance and compositional possibilities. “I think I have just about every generative melodic Eurorack sequencer that is out on the market, he says. “Misha stands out because it helps me get very unique, quick generative melodies that my other sequencers aren’t able to give me.”

An invitation to creativity

With its clean user interface, including interval-based buttons, key/scale knobs, transport controls, and an intuitive LCD display, Misha is equally suited for both live performance and studio work. “It is just a very interesting approach to creating and playing new melodies and gave me results that I wasn’t expecting,” Devine says. He also appreciates the extensive I/O of the unit, which offers 3 gate/trigger and CV outputs, as well as MIDI, for interfacing with a range of non-CV-based studio instruments. “I think they did a really good job on the ergonomics, putting all the I/O at the top. This avoids cable clutter and allows easier access to controls.’

Misha’s LCD display is central to the module, providing dynamic information on keys, scales and octaves display, as well as a solfege wheel that displays exactly which note is being played. “The display is also aesthetically beautiful and nice to use in low lighting environment for live performance,” says Devine. “In my studio, I like to work in darker lighting conditions and it’s a nice touch.”

“Changing the map” for generative melodies and riffs

While Devine appreciates old-school, linear-based sequencers, he says that melodic sequencing on Misha is a completely different ballgame: “Firstly, there are dozens of scales, as well as the ability to store and recall presets — which is something that a lot of Eurorack melodic sequencers don’t have,” he says. “This is convenient because you can do some pretty deep compositional 12 tone-based stuff and instantly recall those melodies in a live performance.”

Misha also offers full Scala support — allowing a vastly extended range of customizable tunings beyond more conventional western scales and intervals. Users can save and recall these in any of Misha’s 100 user customizable banks. “A lot of users don’t want to get stuck in the same quantized user scales present in many of the digital-based oscillators and quantizers on the market, since this can lead to repetitive melodies and combinations,” Devine observes. “Misha has been extraordinary for exploring alternate scales and tunings and being able to store and recall that. It is a fascinating module that has changed the map for me when it comes to generative melodies and riffs.” 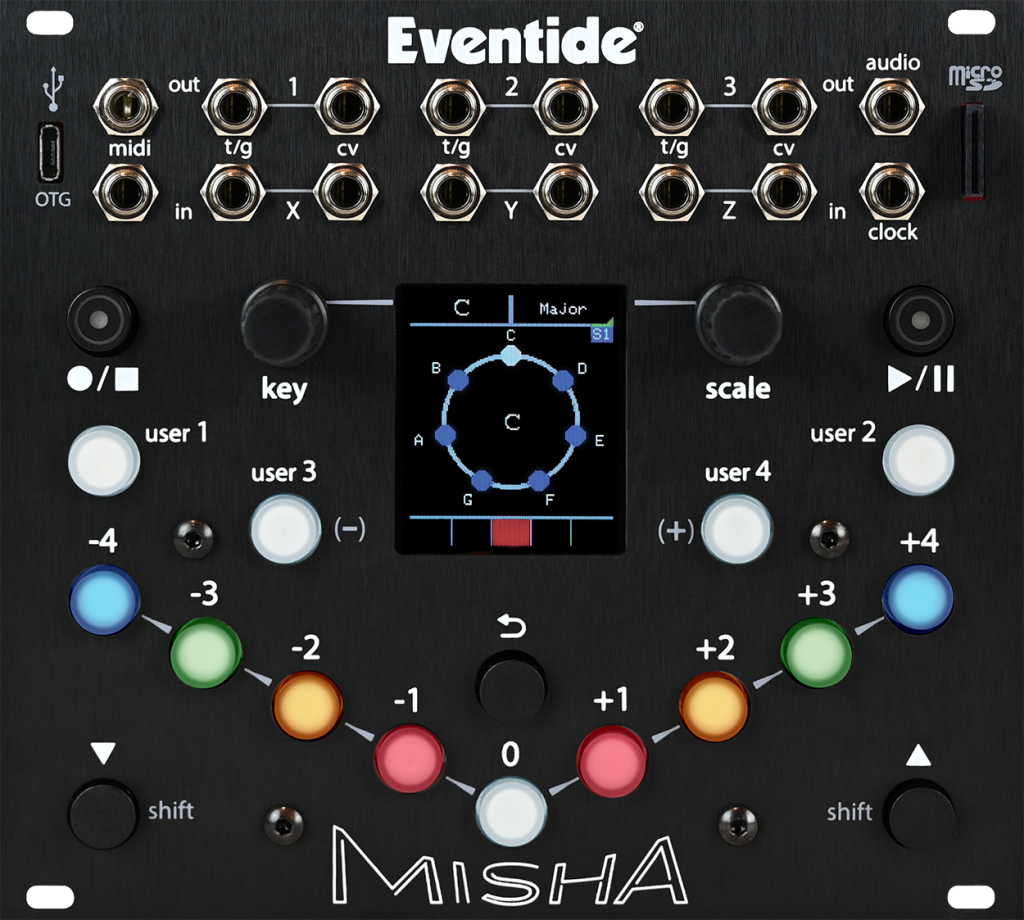 While perhaps most sequencers are used for conventional melody-based sequencing, Devine says that Misha has been equally powerful in generating unconventional rhythms: “Recently, I have been experimenting with Misha as a gate/trigger, percussive sequencer since it is able to create different rhythms than you would normally program. For instance, you can create rhythmic variations based on the clock divisions by flipping between various intervals, which causes the percussive elements to shift. It makes cool rhythmic patterns that are atypical.”

Perhaps even more unconventionally, he has also experimented with Misha to sequence his effects and delay chains using CV: “I really like to have Misha sequence the melody. But sending one channel out of Misha to sequence the effects to counterbalance the melody — so delays are dancing in different times with the melody — can produce some very cool sounds,” he says. “You get these rhythmic variations and subdivisions working with the delay times, resulting in little gestures and flutters that would be very, very difficult to program.”

By pushing a few buttons and generating a pattern, then sending a resulting signal to your outputs, Devine says that something cool is bound to happen with Misha: “Magic happens very quickly with Eventide stuff, no matter what product I am using. You get into these magical places very quickly, and Misha is no exception. And the performance aspect of iterating and mutating — being able to just play, jump and hop around the octaves using these buttons — is just awesome.”

Since 1971, Eventide has remained at the forefront of recording technology. In 1975 they revolutionized the audio industry by creating the world’s first commercially available digital audio effects unit, the H910 Harmonizer®. Since then, their legendary studio processors, effects pedals, and plug-ins have been heard on countless hit records.