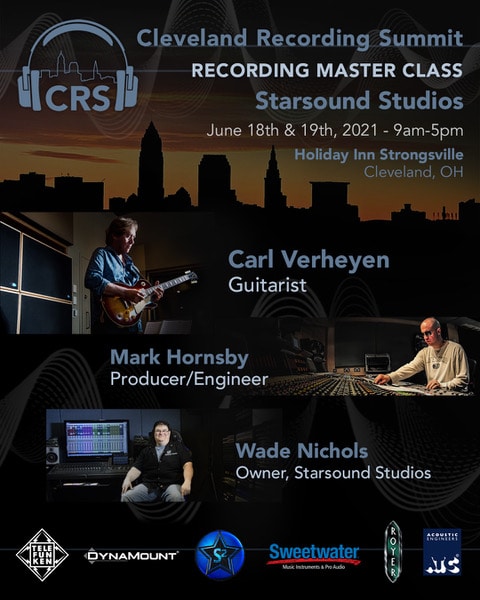 April 26, 2021: Cleveland, OH – Starsound Studios has announced that they will be holding a Recording Master Class with acclaimed guitar virtuoso Carl Verheyen and award winning producer/engineer Mark Hornsby on Friday June 18th and Saturday June 19th. This is the first event in their new Cleveland Recording Summit (CRS) series – a unique set of recording classes aimed at the Cleveland recording and musician community. The first annual CRS allows enthusiasts to learn alongside some of their favorite musicians at the Strongsville Holiday Inn. The class is open to all registered attendees on a first come, first serve basis, and will be overseen by Starsound Studios owner/operator Wade Nichols.

The Master Class will be divided up into two days, giving attendees the full experience from start to finish of recording. Day 1 will focus on guitar mic placement, dialing-in sounds, tracking, overdubs and comping takes with Verheyen and Hornsby. Day 2 will be about fine-tuning the results in the mixing process, and applying compression, eqing, and effects to get the best possible sounds.    • Who: Starsound Studios, Guitarist Carl Verheyen and Producer/Engineer Mark Hornsby   • What: Recording Master Class with Carl Verheyen and Mark Hornsby   • Where: Holiday Inn, Strongsville, Cleveland, OH   • When: Friday June 18 to Saturday June 19 between 9:00 a.m. and 5:00 p.m.“The Cleveland Recording Summit is all about bringing together like minded recording musicians in the Cleveland area” said Nichols. “Carl is a truly versatile guitar talent and his history of working alongside Hornsby means that we can expect some truly incredible music to serve as the canvas for this class.”

Carl Verheyen has been a first-call session ace for the past thirty years, appearing on hundreds of albums, movie soundtracks, and television shows. Although he may be known to most as a member of Supertramp, Verheyen has carved out a distinct yet versatile identity in his own music, releasing more than a dozen albums and live DVDs wherein his mastery of the guitar as a singular voice across multiple genres has been readily apparent.Mark Hornsby is an award-winning producer and engineer who spearheaded Sweetwater Sound’s educational programming and Recording Master Class series. His engineering and production work have spanned every genre and has seen him working with a wide variety of guitar talents, including Rick Nielsen, Paul Gilbert. Al Di Meola, Robben Ford, Eric Johnson, and many more.The first annual Cleveland Recording Summit is brought to you by Starsound Studios, ATC, Sweetwater Sound Inc., Telefunken, Royer Labs and Dynamount Industries.