We set out to make the hardest hitting compressor in the industry. The kind that makes your tracks slam and sing. To achieve that extra edge, IHNY-2 works in parallel. This allows you to compress more while retaining the dynamics of your dry track.

Contemporary mixes need punch. And to achieve maximum impact, without killing a track’s dynamics, engineers turn to parallel compression (a technique that blends a dry track with a heavily compressed duplicate). IHNY-2 hosts a plug-and-play parallel configuration so you don’t have to set up any extra routing in your DAW.

The plugin is purpose-designed for slamming your tracks in parallel and will hit harder than your typical go-to compressors. It is not subtle, but a dedicated tool for adding energy and “slap” to drums, mix buses or even the master bus (if you dare!)

IHNY-2 is an evolution of our very first plugin, I Heart NY. The original was a favorite with many users and was picked for the SOS Awards by Sound On Sound Magazine. V2 ships with new features, surgical control – and improvements in sound.

Configuration:
IHNY-2 splits the incoming audio into two duplicates. One remains untouched by the plugin (Dry track), the other is subjected to all the goodness IHNY-2 has to offer (Wet track). You balance the two signals on the vertical axis of the XY pad, while setting the compression amount of the Wet track on the horizontal axis. This allows you to operate the most important controls of the plugin in just one motion.

IHNY-2 has an autogain algorithm working under the hood to give you a consistent output as you move the node around the XY pad – but if you find that it’s too loud or too quiet you can use the Autogain slider on the front panel to nudge the behavior.

While moving the node around the XY pad, you’ll see a value displayed under the “AGR” abbreviation (Adjusted Gain Reduction). This number takes into account the current Gain Reduction and Dry/Wet balance to give you a value for the compression intensity. For a good starting point, we recommend you aim for AGR levels between -10 and -20. 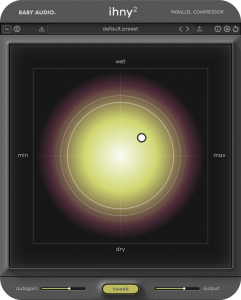 Tweak Panel:
HNY-2 is meant to be as fast and intuitive as its predecessor. But if you need to go deeper, the Tweak Panel gives you full control over the compressor. Here, you’ll find a number of new features that weren’t included in V1.

Sets how fast the compressor engages and disengages.

Sets the compression intensity from mild to aggressive.

Heavy compression tends to suck the transients out of a signal. The Punch control works to emphasize attack transients in the compressed track, helping it cut through even at very high compression levels. 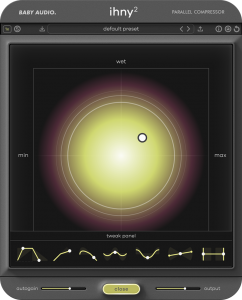 Imagine a saturator that behaves like a compressor – that’s Harmonics. This feature introduces harmonic saturation controlled by the gain-reduction, meaning more compressed parts get saturated harder.

Adds our custom ‘smiley EQ curve’ to bring out the lows and highs and make the compressed signal more present. (The smiley EQ curve is what sets “New York Compression” apart from regular parallel compression. IHNY-2 can do both).

Makes the compressor work harder on either the low or high end of your signal – which can be useful for controlling bass heavy material and letting the high end breathe (or vice versa).

Prevents the low and high frequencies from being compressed above/below the cutoff points. This is a great way to preserve the kick while squashing the rest of your drum bus.

Solo:
Monitor the wet signal in solo. Useful for finetuning – or for using IHNY-2 as a regular insert compressor.

Tooltips:
Turn on to get explanations of each parameter as you use the plugin.

Save As Default:
Save your own default preset, which will load whenever you open a new instance of IHNY-2.

Reset To Default:
Reset the plugin to your default preset.

Cmd+Click:
Slows down mouse movement in the Tweak Panel for finetuning purposes.

Double Click:
Resets any parameter to its default value.

It’s All About The Sound

IHNY-2 comes with a range of new features to surgically tweak the compression behavior. But a compressor should not be judged on its features (or ability to run in parallel) as much as it should be judged on its sound. Let’s get into that.

Just like its predecessor, IHNY-2 offers its own, unique sonic signature: Its style of compression is clinical and aggressive, combining the precision of a digital algorithm with a touch of analog-inspired non-linearity. It can even go into full-on saturation mode as you apply the ‘Harmonics’ control.

The plugin is designed especially with modern genres in mind – i.e. optimized for loudness and impact, without a loss of clarity.

However, some of our inspiration actually goes back in time as well. Particularly to the affordable DBX units of the 80s and 90s. You can call them basic, but these compressors had a brutal and hard-hitting nature that their more sophisticated counterparts just couldn’t muster. They are loved and used for that to this day!

With IHNY-2 we had an ambition to take the “slammy” and “squashy” behavior of our favorite old hardware compressors even further – and make it an intentional feature rather than a byproduct of design limitations. At the same time we wanted an algorithm that didn’t destroy the signal, even at high compression levels (unlike cheaper hardware compressors).

We’re sure you’ll find that IHNY-2 sounds like none of your other plugins. It’s not designed for “smooth” work. But when you need some power, you’ll have a hard time finding a better companion. IHNY-2 is everything I Heart NY was – and so much more!

IHNY-2 comes loaded with 156 presets created by BABY Audio and friends of the house – including:

* Legal Disclaimer: The trademarks of other manufacturers are used solely to identify the products whose sounds were studied during our development of IHNY-2. None of the aforementioned brands have licensed any intellectual property for use in IHNY-2, nor have they endorsed or supported IHNY-2 in any manner.

The company has built its new facility to showcase the suitability of the PMC brand for this exciting new music mixing format.

Biggleswade, UK: August 24th 2022: MGM Audio AG, the Swiss distributor for PMC’s entire range of loudspeakers, has installed a new Dolby Atmos Music demo facility at its premises in Glattbrugg, near Zurich airport, to showcase the suitability of PMC monitors for this burgeoning immersive audio format.

The new 7.1.4 demo room is equipped with monitors from PMC’s recently launched compact near and midfield series, which are redefining the listening experience for audio professionals working in stereo and large-scale immersive formats. The system includes three PMC8-2 monitors for the front LCR, two PMC8-2 SUBs for LFE and eight PMC6 for surrounds and ceiling. Other equipment includes Avid ProTools Studio running on an Apple Studio, an SSL A16.D16 Dante Converter and an SPL MC16 Analogue Monitoring Controller.