Bridging the gap between the company’s highly successful 1608 and AXS consoles, the new 2448 responds to the industry’s requirement for a smaller, compact dual-signal path analog recording console. 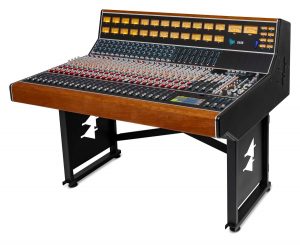 The 2448 offers 24 fully featured channels for multitrack recording and 56 channels for mixing, providing audio professionals the advantages of a large format console in a more compact and affordable package. The console is available in 24, 32 and 40 channel frame sizes, and offers a powerful and impressive feature set including dual inputs on each channel, four stereo returns and optionally, API’s new cross-platform Final TouchTM fader automation system. Customers are already taking delivery of the 2448 with eight consoles sold prior to AES.

“Like every API product, the new 2448 was carefully designed with the user in mind,” said API President and Owner Larry Droppa. “Given the hundreds of consoles we’ve sold over the past few years, I have every confidence that the 2448 will meet – and exceed – the very high standards of excellence and performance that the audio community expects of API.”

API’s 1608-II adds new and powerful features to the already hugely successful 1608 console, and was carefully designed to continue API’s tradition of crafting the world’s most sought-after analog recording consoles. 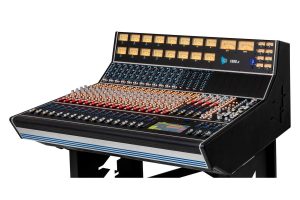 Since the introduction of the 1608 in 2008, API has delivered over 600 consoles and expanders to discerning audio professionals throughout the world. Given the success of the original 1608, API’s Engineering team focused much of their efforts on making the 1608-II even more intuitive to use, including a layout upgrade to the Auxiliary Masters, the inclusion of 4 automatable Stereo Returns, and a revamp of the Control Room section of the console to provide even smoother and easier workflow.

“Also new to the 1608-II is API’s optional cross-platform Final TouchTM automation system,” notes API Director of Engineering Todd Humora. “Final Touch is a step up from the already excellent automation system that was offered with the original 1608. Not only is it equipped with an easy-to-navigate touch screen, but moving forward, Final Touch mixes can also be shared among API consoles that feature Final Touch. For example, now you can record tracks on a 1608-II console and Final Touch allows you to mix those tracks on a Legacy AXS or Vision console. This is a major step in convenience that Producers, Engineers and Mixers have been asking for.”

Built to the same standard of excellence as the Vision, Legacy AXS, 1608 and The BOX consoles, the 2448 and 1608-II continue API’s nearly 50-year legacy of combining functionality and reliability with the unmistakable warmth of the API sound.

Automated Processes Inc. is the world leader in analog recording gear, and features the Vision, Legacy AXS, 1608, and The BOX recording consoles, as well as its legendary line of analog signal processing equipment.