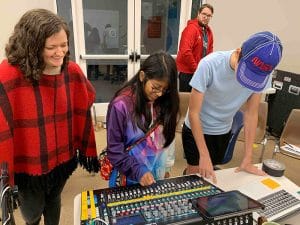 Four Allen & Heath Qu Series digital mixers perform a wide variety of jobs for Highview Baptist in the smaller and medium-sized spaces across its three-campus network in Louisville, Kentucky. Technical Director Rick Mead says these rooms host everything from band or drama rehearsals to large meetings and conferences. “So, part of my job is to equip each of these spaces, and the groups who use them, with the audio systems and other tools they need to be successful.”

Highview’s first Qu Series mixer was a Qu-24, purchased from Full Compass Systems to replace an older analog console. Mead says, “Honestly, we were so blown away by what that little mixer could do that it changed our thought process for our smaller spaces.” Highview then added three Qu-16s and Mead continued, “One of the things I love about the Qu Series is that, for a small mixer, the features and hardware are great. The preamps are super clean and the digital processing for reverbs and effects is actually better than some larger mixers I’ve worked with from other brands.”

Highview also purchased three AB168 portable remote AudioRacks to use as stage boxes and an ME Personal Mixer system for in-ear monitors in their main sanctuary that travels to the smaller spaces as needed. “After I put in that first AB168, I decided I was done with analog snakes,” said Mead. “And all my band members just love the ME-1s.” Mead often records events using the mixer’s multi-track Qu-Drive output linked to a PC running Waves Tracks Live. For training and setup, he plays back the recordings using the mixer’s virtual sound check (VSC) feature.

Mead used his Qu-16s for a recent youth retreat. “We had two separate bands in two different spaces and, for the last session, we needed to combine them. I had spent a lot of time doing things like dialing in the drums, and didn’t want to start that process over. So, I saved my show file on a flash drive. Then, I brought up another Qu-16 in a portable rack, recalled my settings from the flash drive and configured a few more inputs. What could have been a complicated setup became fluid and simple.”

Mead comments, “Allen & Heath is the only manufacturer I’ve found that keeps a similar workflow and structure from their smaller mixers, like the Qu, all the way up to their larger consoles, like SQ and the new Avantis. That greatly simplifies training and helps us standardize our systems. My ultimate goal is for us to be top to bottom Allen & Heath.”