An impressive 6.5″ powered monitor from a respected loudspeaker company

Founded in 1979 in San Francisco, Meyer Sound is best known for its loudspeakers found in live touring rigs, immersive theater setups, dub stages and the like. The company also produced one of the world’s first powered studio monitors in 1989––the HD-1. This is back when studio monitors were still a passive affair. The latest studio-focused monitor offering from Meyer Sound is named Amie.

Amie is a studio monitor housed in a 15.3″ T x 9″ W x 8″ D multi-ply Birch enclosure with a textured black finish. The cabinet is exceptionally lightweight for its size at 25 lbs, and includes side screw holes for use with optional mounting brackets.

It features a 6.5″ long-excursion cone driver and a 1″ silk-infused dome tweeter seated in a constant-directivity waveguide (which looks a bit horn-like). Bass is dispersed by a 1.5″ front-firing bass port—an optimized low‑turbulence cabinet port in Meyer Sound lingo. The technology employed by Amie is adapted from the Meyer Sound Acheron screen channel loudspeaker used in cinema setups.

Amie is powered by a dual-channel 900W Class D power amp, and if you think, “That’s a lot of power for a 6.5″ studio monitor.” Yes, it is! Headroom is not an issue for Amie. Said power amp, tuning, and crossover make use of onboard propriety DSP, ensuring incredible phase linearity and a flat tonal response.

Beyond that, there are no controls for room correction, EQ or level, and curiously no power switch. However, there is a built-in power LED, and low and high-frequency limiter/peak indicators.

I first experienced Amie at the 2022 New York AES show, where our associate publisher Brent Heintz and I spent some one-on-one time with a 2.1 Amie setup that included the sizable Amie Sub. Listening in that untreated, curtained-off makeshift demo room highlighted the ability of Amie to throw beautiful, directional spatial sound, even in a sub-optimal listening environment. Essentially this put the speaker’s live sound and cinema-based roots on full display. While this 2.1 setup was room-filling and impressive, we were both equally impressed by the full sound of Amie, even with the sub bypassed.

Setup-wise, Amie is about as plug-and-play as a monitor can get. I first set up the Amie monitors in my treated home office/edit suite. I connected the speakers to an RME-2 DAC FS system in a very near-field setup in a 33″ equilateral triangle, and the resulting sound was humbling. The Amie is about as flat, neutral and transparent as I have heard in a studio monitor.

Lest you think flat frequency studio monitor sound is dull, clinical or stark, that cannot be farther from the truth. Combined with its neutral clarity is a smooth, dimensional richness. The lows are full; the mids are even, yet dimensional; and the high-end is open and clear as a bell, yet silky smooth. Nothing on Amie sounds hyped, excited, forced or biting.

Not only does Amie have the ability to crank with the best of them, but I was even more impressed by the full, accurate sound at lower levels of 65–72dB without any sacrifice of presence or detail across the spectrum.

Amie in the Mix Room

Next, I spent time listening and mixing on the Amie monitors in my professionally treated mix room––Moss Garden Music.

Despite the size difference, I was surprised at how close the mid-range presentation was to my typical 10″ driver-equipped 3-way monitors. Overall, Amie offered just a hair more upper-mid presence.

In a larger space having even a modest sub would be a great addition if more reach and room-filling weight are desired. While Amie will not rumble the room on its own, every inch of low-end is still well represented by this 6.5″ box. Bass frequencies sound appropriately punchy and full without ever sounding stressed.

Once again, Amie exhibited an outstanding balance of tightness and depth. 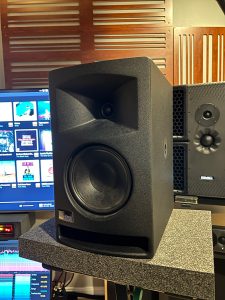 For a second option, I took Amie to the mastering room of Justin Perkins at Mystery Room Mastering in Madison, WI (mysteryroommastering.com). Justin typically uses a set of PMC 8-2 monitors balanced with a Trinnov room correction system. I didn’t expect the smaller Amie to fill that void, but I was still curious how they would sound in a mastering rig.

Justin’s initial impression was that despite their 42 Hz–22 kHz operating rating, he was convinced they reached down below 42Hz. He did feel they were perhaps a bit too smooth on the high-end for his tastes in regard to mastering, but he did think they offered a very coherent sound stage and zero brittleness or harshness.

We cranked them up to a hearty 102dB and heard no clipping and still could not audibly engage the built-in limiting. 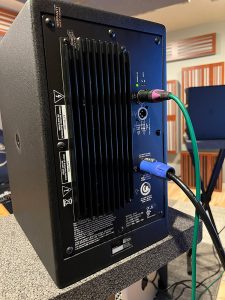 While I had experienced Meyer Sound systems live, as well as the company’s impressive multi-speaker space shaping Constellation system, when I visited Bobby Weir’s TRI Studios a few years ago, I went into this review with zero preconceived notions or expectations. Frankly, the full, deep and clear, yet silky, life-like sound of the Meyer Sound Amie was gorgeously impressive.

At $6,998.96 per pair, these are a serious investment in a small, elite realm of high-end studio monitors, but after spending time with Amie, it’s hard to dispute their value. If you have never thought of “Meyer Sound and studio monitors,” think again.